My iPhone 4 can't download any apps. There's a warning message that says "couldn't download the app at this time" and "done" and "retry". What can I do?

Please try the following steps to fix your problem. After each step, check whether you are still having this problem.

Try connecting to a VPN and then retry downloading or updating.

I was having trouble updating an app. It would appear to work, then failed with this message: 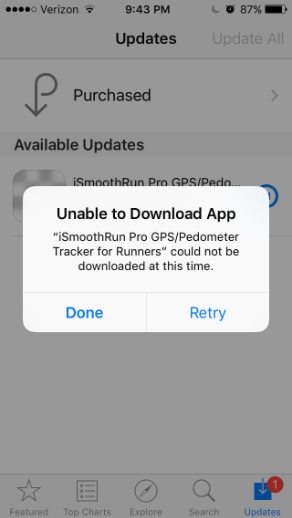 I had tried many of the suggestions found here, as well as on discussions.apple.com, none of which worked for me. Some suggestions recommended fiddling with wifi, resetting network settings and setting the DNS to 8.8.8.8. I couldn't imagine what most of those suggestions would have to do with the problem. But, I noticed that the common denominator to many suggestions revolved around networking. So, it gave me the idea to try the VPN app on my phone. I tried that and Bingo! Just connecting to the VPN allowed me to complete the update.

To be clear about how I connected to a VPN, I used the PIA app from Apple's App Store. I'm sure there are many VPN options. But, the point is that the connection was made to a VPN server from a VPN client residing on my iPhone. This is an iPhone 5S, by the way.

Here's one I found on apple.com

Warning: sometimes this does not work

It works better on an iPad device.

Generally a hard reboot will fix that... To force restart your device, press and hold both the Sleep/Wake and Home button for at least 10 seconds, until you see the Apple logo.

In my case, I just downgraded my iPad 2 to iOS 6.1.3 and was unable to install any app (I can browse in Safari, view App Store etc. however). I tried all solution in the top 2 answers, as well as re-flashed iOS 6.1.3 again, but all to no avail.

Finally, I set up a VPN connection and was delighted that it began to download apps. I also set up an HTTP proxy and it also worked.

IMO, if you have tried Airplane Mode and signing-out then signing-in to your Apple ID and both don't work - go get some VPN or proxy - your network is doing something wacky that you won't solve with your iPhone, iPod touch or iPad. This should particularly be considered if your App Store region doesn't match your location (see below).

It could be that the Communist Party just outright blocked some of App Store's functionality (Note: my Apple ID's region is set to United States, instead of where I live (mainland China)).

Not the answer you're looking for? Browse other questions tagged iphone ios ios-appstore .