My Macbook battery (I guess batteries is the more correct term in this new Macbook) isn't getting battery life as estimated by specs, and it is already lessened in only about 2 months. Today, I ran a hardware diagnostics with no errors reported.

I ran a CPU analysis in Activity Monitor, but nothing seemed to be using a ton of CPU (not that I really understand it, b/c Apple support threads say to analyze by percentage to see if any one process is hanging, but they continue changing so how to know anyhow??)....but I digress.

So, I had also been having some problems with Safari freezing and other issues with a variety of programs, and ended up having to reinstall the OS X, some of which continue to occur despite this "fix". While I was looking at the CPU %'s I clicked Safari (w/in the Activity Monitor) and when it was open, I clicked on the Statistics tab...for what, I don't know because none of it makes a lot of sense to me, by way of what it really represents, but regardless, I did it. There I found what seemed like a huge number of "faults".

I did the same with a few other running programs/apps and they showed no faults (or even a listing for faults where they could be displayed).

What are faults in this context and what does a high number represent? Is this reflecting errors? Is this something that could drain battery? Is it something else I should be concerned about? 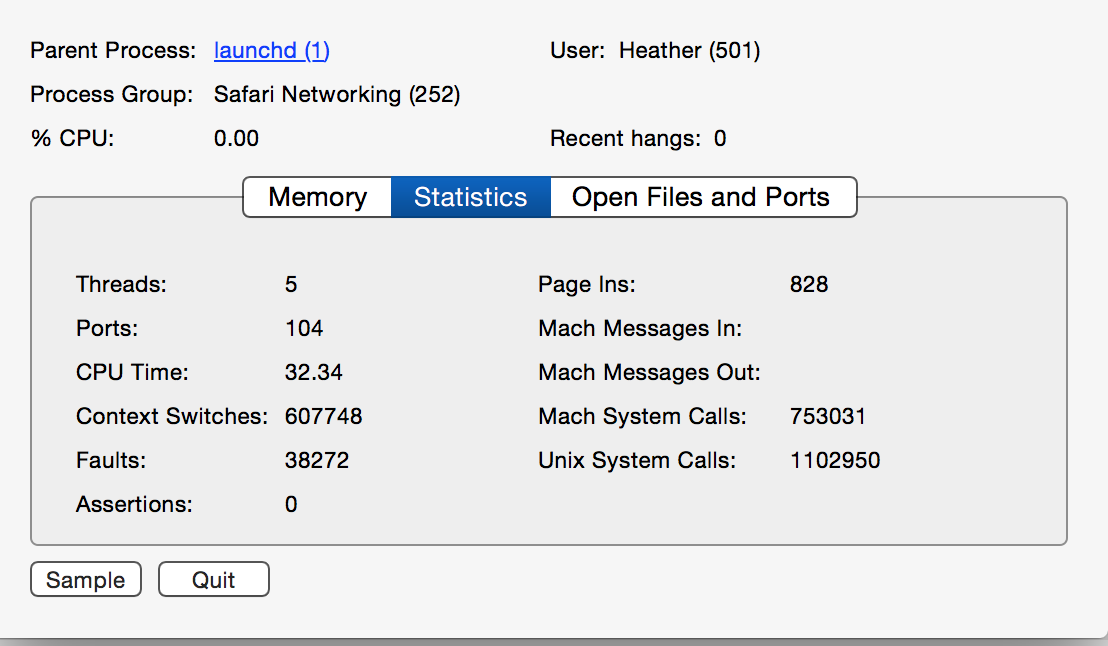 In the context of the statistics shown here, the 'faults' represent 'page faults', which are actually benign and refer to an attempt to read something that was not present in memory. This is taken care of in the virtual memory system by 'paging' the requested memory into the memory map of the process. But the OS keeps track of how many of these there were. If the number is very high, it can mean that you don't have enough RAM, or that you have a large number of processes trying to use more RAM than is currently to hand.

Assertions represent something unexpected by the program, and would be indicative of some kind of problem. I would be surprised to see any of those in 'live' commercial software, though.

Things that can drain battery more than expected include:

Not the answer you're looking for? Browse other questions tagged battery activity-monitor cpu .