Location information is not shown in “Years” view of Photos App

I do not see the location information of the pictures I have taken in 2014 when I am in "Years" view. 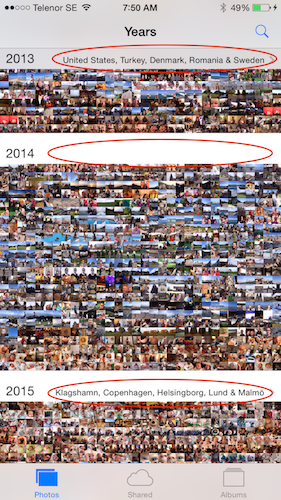 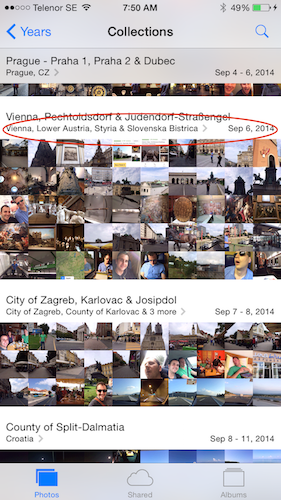 Has anyone had this problem?

I think it is probably down to visiting lots of countries maybe? For example, I have currently visited 7 countries this year (2018) and I am sure my info was there a month ago. It seems to be a sequence as someone has mentioned already with ‘this country, this country & 3 others, where it doesn’t seem to mention 4 others or 5 others etc. Another thing.... info does not show for me in 2015 either... that is the year I visited various Caribbean islands), so it’s probably a multi country thing. Maybe there is something in that?

Yes, you are not alone. I've been having the same problem, started mid-way through 2014. I didn't think anything of it at the time, but wish I had.

I've also gone through multiple rounds with Apple Support only for them to repeatedly tell me that I have no GPS data in 2014 pictures, despite the fact that the vast majority do have GPS data.

A few months ago the same thing happened to me with 2015, lost location information in 'Years' view. I realised this was related to importing a series of photos from my GoPro, and after deleting them all from my library, adjusting GPS EXIF data and re-importing (this was before Photos for Mac supported editing GPS data directly), the issue went away.

I suspect the issue is down to a selection of images that do not have GPS data / have invalid GPS data, causing something in Photos to barf.

Reading https://discussions.apple.com/thread/7174772?start=0&tstart=0 has led me to believe that it may be possible to create a smart album for all photos in 2014 that do not have GPS data. If so, then it can lead to one or more of the following options:

Sorry I don't have anything more helpful to report, but at least you know you're not alone! :-)

If you do make any progress on any of the above, please to share. I will also share if and when I'm able to identify anything further.

Not the answer you're looking for? Browse other questions tagged macos ios icloud photos gps .

4
Sort photo collection from iphone into folders by year, month and city/region
1
How did my deleted iCloud photos end up in the new Photos app?
2
How do I change geolocation of photos in the Photo app?
1
Problems with duplicate photos on Photos app
2
How to push only with iCloud photos
0
Why Does Photos Not Display All Pictures in Library?
0
Synced video in photos app doesn't load in airplane mode