I am resetting my sister's MBP late 2010 to factory defaults. It's all backed up. I'm reinstalling from the recovery partition currently. Before I started working on it today, it had the very descriptive problem: "wouldn't boot."

I previously had installed Ubuntu on this since she wanted to try it, and it was run as a dual boot system for about a year. Now, the disk space needs to be brought back into Mac, since the HDD was almost full. To top it off, Grub/rEFInd seem to have gotten lost at some point along the way during an upgrade, so Ubuntu is functionally gone anyway.

I did some research, took it into safemode, which did boot, backed up, and then booted into recovery (command + r), opened up disk utility, formatted, and clicked the - button on the three Linux partitions (boot, swap, and file system, I believe).

Now, when I look in Disk Utility, on my 320GB HDD I see a ~200GB Macintosh HD (which I have erased and formatted), a Recovery HD, and there's over 100GB missing. There's no other partitions, and I can't expand the Macintosh HD partition.

Immediately after removing the partitions, I had a Partition Table error when I ran Verify on the HDD. Repair kept failing, so I rebooted into recovery mode and ran repair. Now there's no error, but still no drives.

When click on the HDD and go to the Partition tab, I can choose 1 Partition, which does correctly show 320GB. Otherwise, I can't find the lost 100GB. I tried enabling debug mode (something like defaults write com.apple.DiskUtility DUDebugMenuEnabled 1) and checking making everything visible, but the partitions still are not visible.

Edit: Per the comment, here's the output of sudo gpt -r show /dev/disk0

And a screenshot of DiskUtility's output. As you can see, my 320.07GB HDD has a partition just shy of 217GB Macintosh HD. The Recovery HD partition is 654MB, leaving 102GB lost. 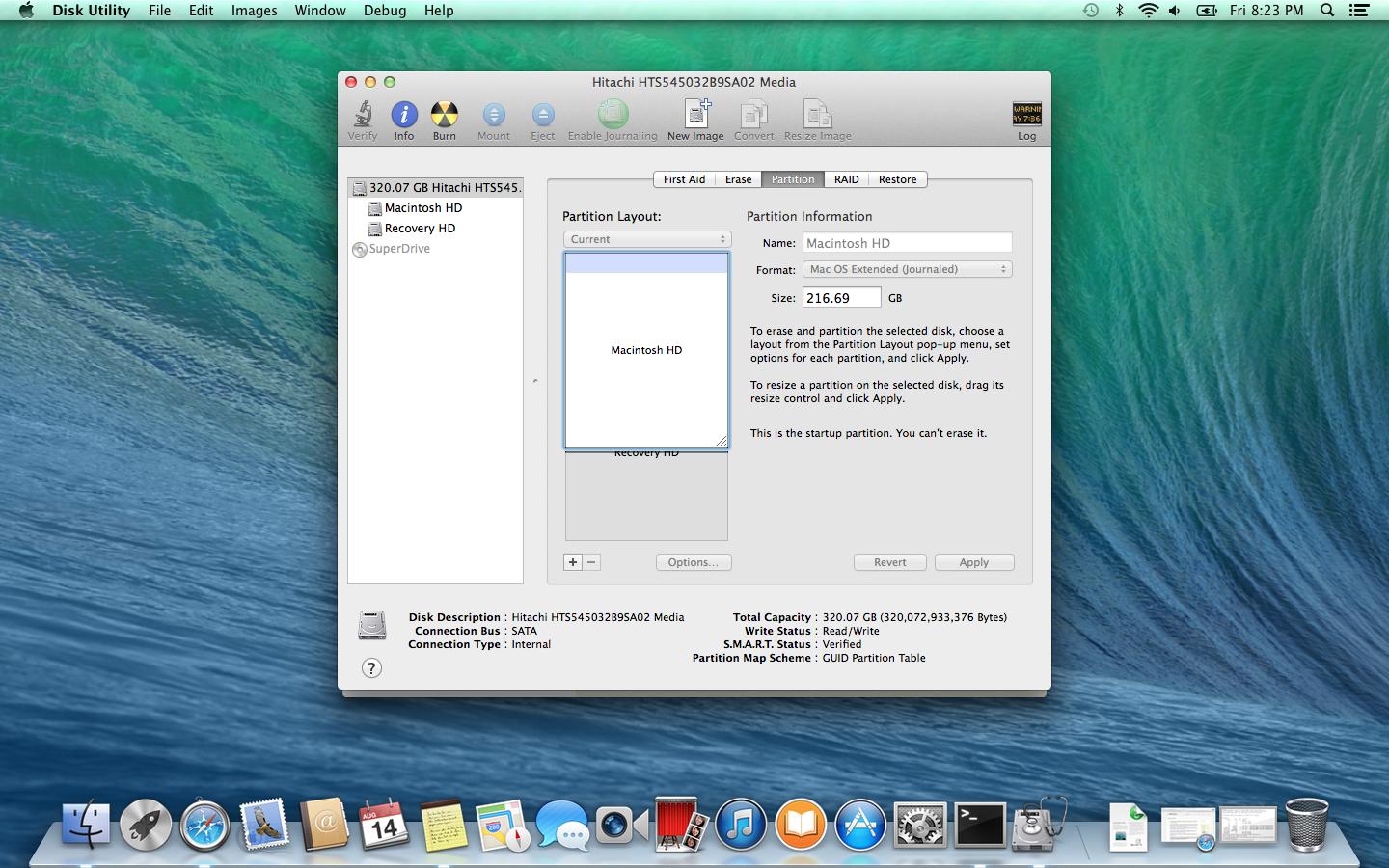 As the gpt command reveals you have two recovery partitions (and a lot of unallocated disk space after partition 4):

The second Recovery HD (slightly visible below the Macintosh HD in your screenshot) is blocking the expansion of the volume Macintosh HD. The easiest procedure to solve your problem is to boot to Internet Recovery Mode and completely reformat the internal drive and reinstall OS X:

According to this Apple support document your MacBook Pro (Mid 2010)* can be upgraded to use Internet Recovery after applying a firmware upgrade. Since the firmware upgrade was published in 2012 I assume that it was applied already.

To initiate the Internet Recovery Mode restart your Mac and press alt cmd R.
The prerequisites for an Internet Recovery are listed here: Recovery/Internet Recovery. In a few words you need the latest firmware update installed, either ethernet or WLAN (WPA/WPA2) and a router with DHCP activated for a successful internet recovery.
On a 50 Mbps-line it takes about 4 min (presenting a small animated globe) to boot into the Recovery Netboot image which is loaded from an Apple server.

After booting successfully open Disk Utility and repartition your disk to 1 JHFS+ partition with a GUID partition table. Quit Disk Utility and start 'Reinstall OS X'. Depending on your internet connection the reinstall will take some time.

The second part of question 1 as well as the questions 2 and 3 are obsolete after following the above instructions and successfully reinstalling Mac OS X Lion.

Not the answer you're looking for? Browse other questions tagged hard-drive disk-utility partition install .