How can I retrieve picture files from the Photos App on Mac OS X (Yosemite)?

What I am trying to do without success is to find a way to get the files of my photos (edited and original) in their best quality.

So, let me give a heads up first.

I have a DSLR camera and during this time I've imported my pictures to the Mac in two different ways:

My problem started when I decided to add my photos to Google Photos (with the best quality available). I stumbled into this problem:

When I try either using the share button inside the App (which is not really an option), or to copy the pictures from the App to a directory (Desktop, for example), the pictures I get are not the best quality ones (a full size picture from my camera ranges from 6 to 14 MB each and the shared/copied versions are around 3 or 4 MB).

Therefore, I tried other approaches:

Alright! I got the best original versions! Still needs the edited ones, though.

However, these folders don't have the edited versions of the pictures, so the pictures that I have enhanced in any way will appear in their originals only.

And that's where I got stuck. Up till now, I did not found any other folder (inside the Photos Library) which might contain the edited photos, nor did I find a way to override the originals with the edited versions.

Does anyone have a say on this?

Thank you for your time. I'm open to any clarification.

[Bonus] I suppose this is to be considered a feature, not a bug, however, when deleting pictures that were imported through the App, they go to the "App's trash can" (File -> Show Recently Deleted) and once you've deleted them from there, they are gone for good. However, when the pictures were imported from outside the App, after deleting the pictures in the App, they do not go to the "trash can", they disappear from the Photos App, but stay in their original folders as if nothing had happened. (I'm still trying to figure out a way to get rid of them without having to compare the filenames one by one, but that's another story.)

[Bonus Update] I just noticed that the pictures do go to the "App's trash can", but you have to delete them from the "Photos" view (I was doing that from an Album). However, this does not solve the problem, since the pictures are not removed from the imported folder, even after cleaning the trash can.

When you choose to export from Photo (File>Export), choose TIFF, 16-bit and you should get a full quality, uncompressed, but edited image out of Photo. This is what the settings in the export dialog box will look like: 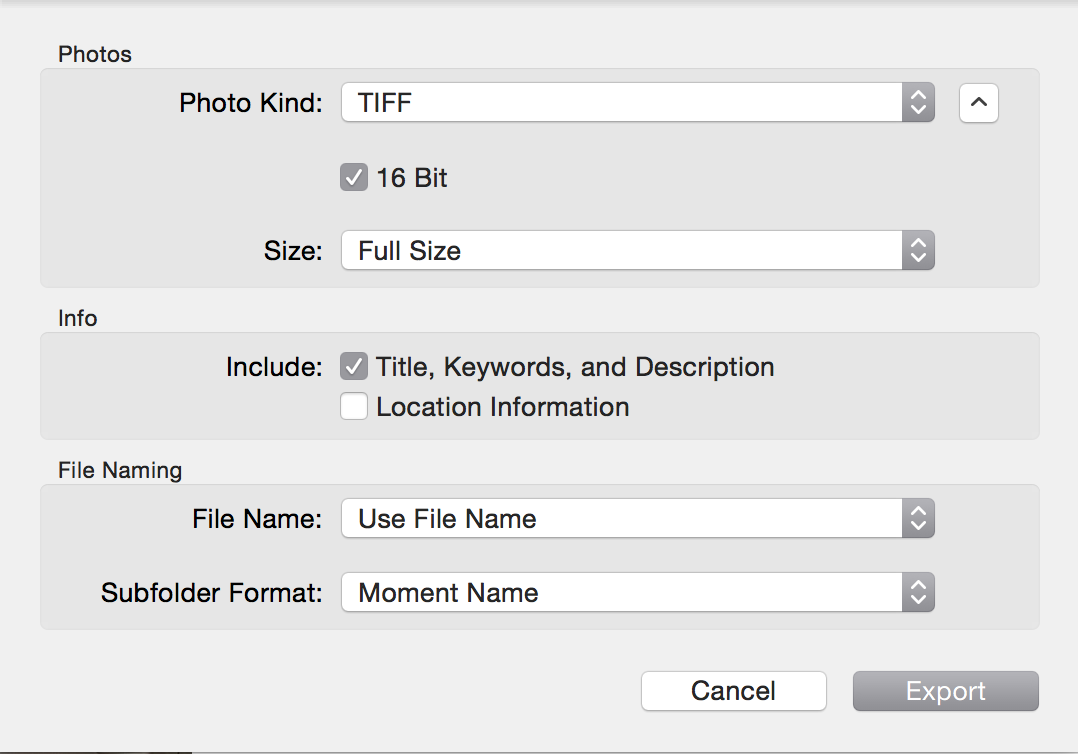 The reason you haven't found the folder with the edits are that image editing programs such as Photo or Adobe Lightroom perform non-destructive edits as an instruction set that sits in a database that references the original image. Basically your edits just create a recipe that the software then can use to create an output file. If you choose to print, it will give the instructions on how to render the edited image to the printer. The only time you will get an edited file is if you export to a file format such as JPEG or TIFF.

TIFF gives you an uncompressed file, and by choosing 16 bits, the software is actually interpolating to add pixels to your photos as most digital camera sensors produce a 12 or 14 bit image. There isn't much of a point for more, as the human eye has a hard time distinguishing the available gradations of a 16-bit dynamic range.

JPEG is a Lossy compression format, but for even a 5K iMac, if you go for the highest quality, largest file size, you will likely not be able to see a difference between the TIFF and the JPEG version of the file, and you will have a file that is probably 80% smaller, depending on the subject matter.

You also have the option of exporting the Unedited originals (Raw files) using this option as well. There is an option to export IPTC data as an XMP sidecar file.

Not the answer you're looking for? Browse other questions tagged macos mac photos .

1
How to optimize imported photos from digital camera?
1
How to remove all pictures from the Photos app and put them in a folder?
14
Export from Mac Photos app while keeping date created data?
1
How to import edited (cropped/filtered) photos from iPhone to Mac?
0
Airdrop or export multiple original quality videos from iOS Photos app
1
Recover photos from thumbnails in Photos app
4
Photos library - importing photos from DSLR camera - missing Masters directory (macOS Catalina)