Looking for charting recommendations beyond Excel and Numbers

Recently both Numbers and Excel failed me in my charting needs. I got the job done in Numbers, but only with brute force by creating 28 charts in what should have been two.

Back in the 90s, when I was using Aldus Persuasion for my presentation needs, I remember there being a dedicated Mac OS charting program called something like Omni Chart (not related, to my knowledge, to The Omni Group) that offered more advanced charts than were at that time unavailable in Excel. Since it looks like I'll be doing more charting in the near future, I'm looking for something similar for OS X.

A major test of any recommended software would be its ability to easily create a chart like the one below, which shows comparison data for two groups who answered seven questions in two ways each (in this case, how important the question was and how well performance rated). The chart was created in Numbers and is actually fourteen charts, one for each column.

Some points to mention:

You were not able to get Excel to do this for you? 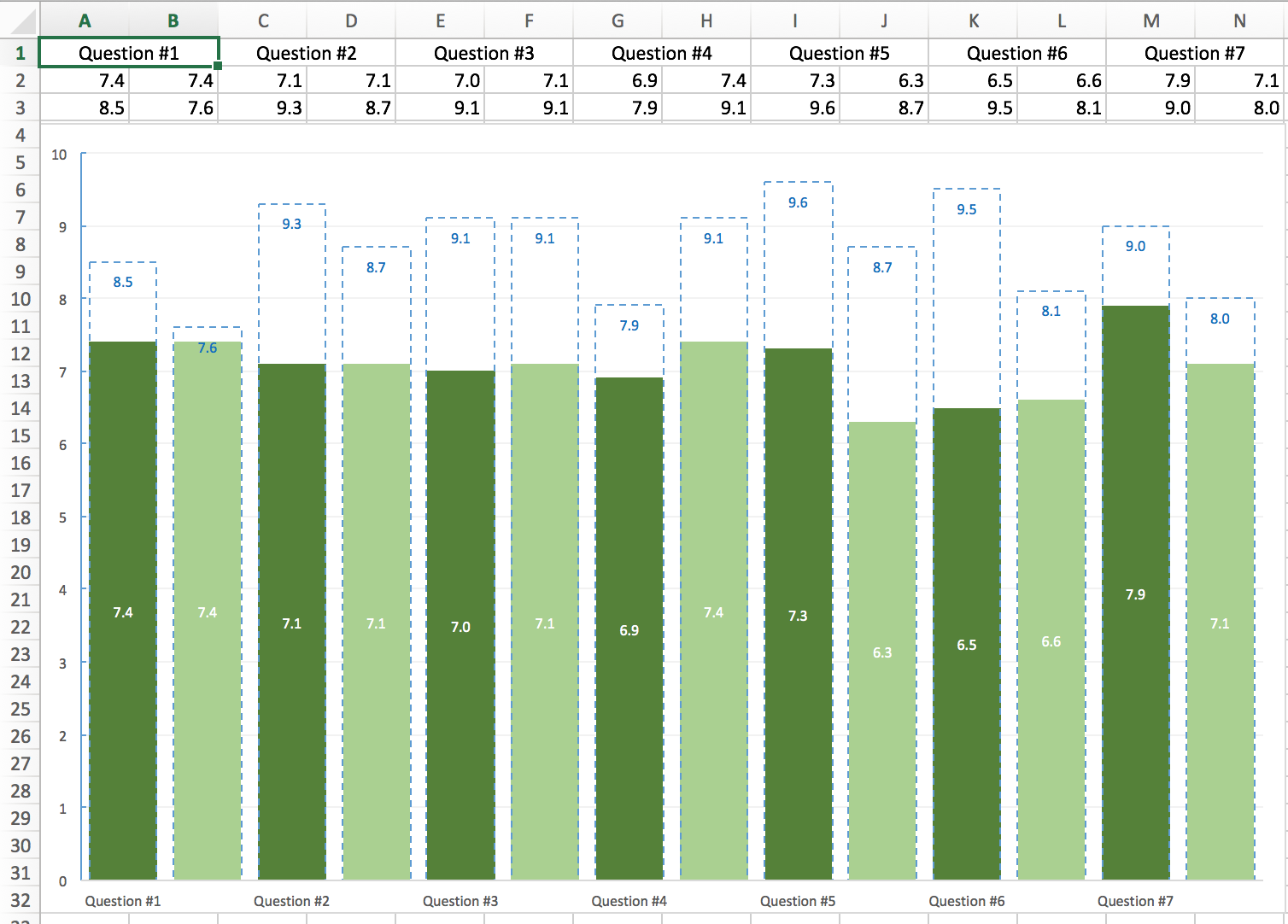 The only thing I was not able to do was to get the Horizontal labels centered underneath the columns, but you could likely do it by hand if you hid the column labels then manually typed them into the axis label instead.

This is how I got to the picture above.

Highlight A1 to N3 and then select Stacked Columns.

Next you will want to edit the Data Series to this 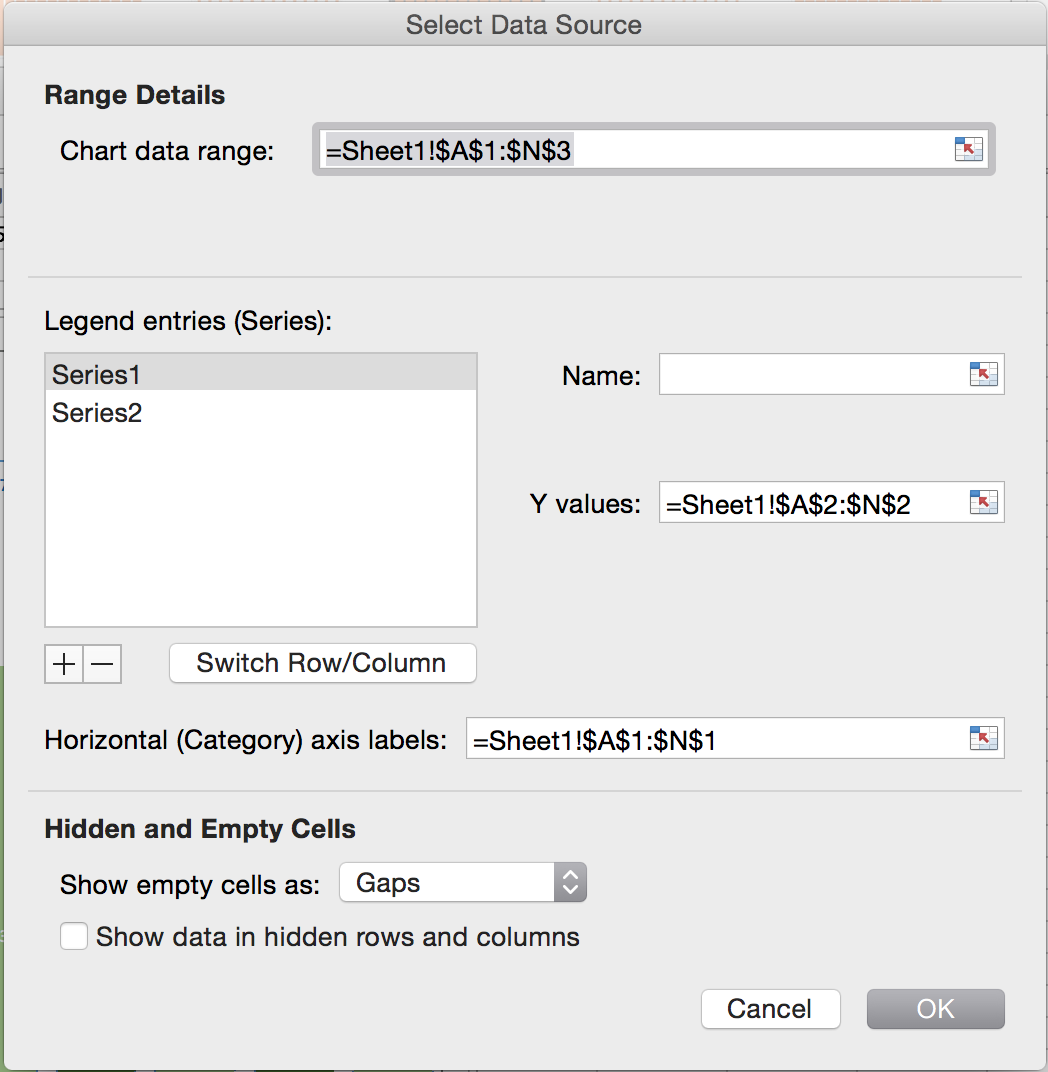 You will have two data series and it will initially be stacked, so you will end up with a y-axis of 16 or so. Leave that for now as it is easier to do all of the formatting before you make the final changes to get it to look like this.

Go through and change your color scheme for all of series 1 to Green. You will then have to select the even numbered columns and change their fill to the lighter color individually.

Also on the version of Excel I am using there is a Gap Width slider under the formatting for Series 1 and 2 (Though I only had to set it once. I am not 100% sure if it is the same on other versions, but I set it to 25% and that gave me the spacing that you see between the columns.

Next select no fill for series 2. Then change the label color to a darker color so that you can see it. You will also need to change the position to Inside End so that they move to the top of the column Next change the Border to Solid Line and you can choose the dashed line option. I chose the fill as blue as that is what you had.

Now what you will do is select series two and you will choose Plot Series on Second Axis under Series 2 Format Series. This will drop then down so that instead of starting where Series 1 column ends, the zero-points are made the same for series 1 and series 2. When I did it the scaling was a bit off. So select Vertical (Value) Axis and make the Minimum Bounds to 0.0 and your Maximum Bounds to 10.0 (At least for this data set) adjust accordingly for different data sets under that Formatting option.

At this point you are basically done. You can do minor things like deleting the Legend that shows series 1 and series 2 (or you can name them accordingly) and adding gridlines. You could manually go in a move the 7.6 in Question # 1 column 2, so that it is outside of the fill. etc. But you can basically get almost the entire way to where you want to be inside of Excel.

If I left anything out just ask it the comments and I'll respond.

As I am a bit of a perfectionist and was really annoyed by the fact you could see the dashed line around the entire border, I worked out the how to cover that up.

You would think that the data mapped to the Primary Axis would be in front... NOPE! That would make too much sense to a Microsoft developer... Anyway here is what you do.

Select Series2 and Plot Series on Primary Axis. Then Select Series1 and Plot Series on Secondary Axis. Adjust the scaling (AGAIN), and add a solid border of the same color to the fill of Series1 (sorry, but you have to do it for all of the even colored ones individually), and set the size to be the same point size as your dashed border for Series2, and Series1 now covers Series2, like this: 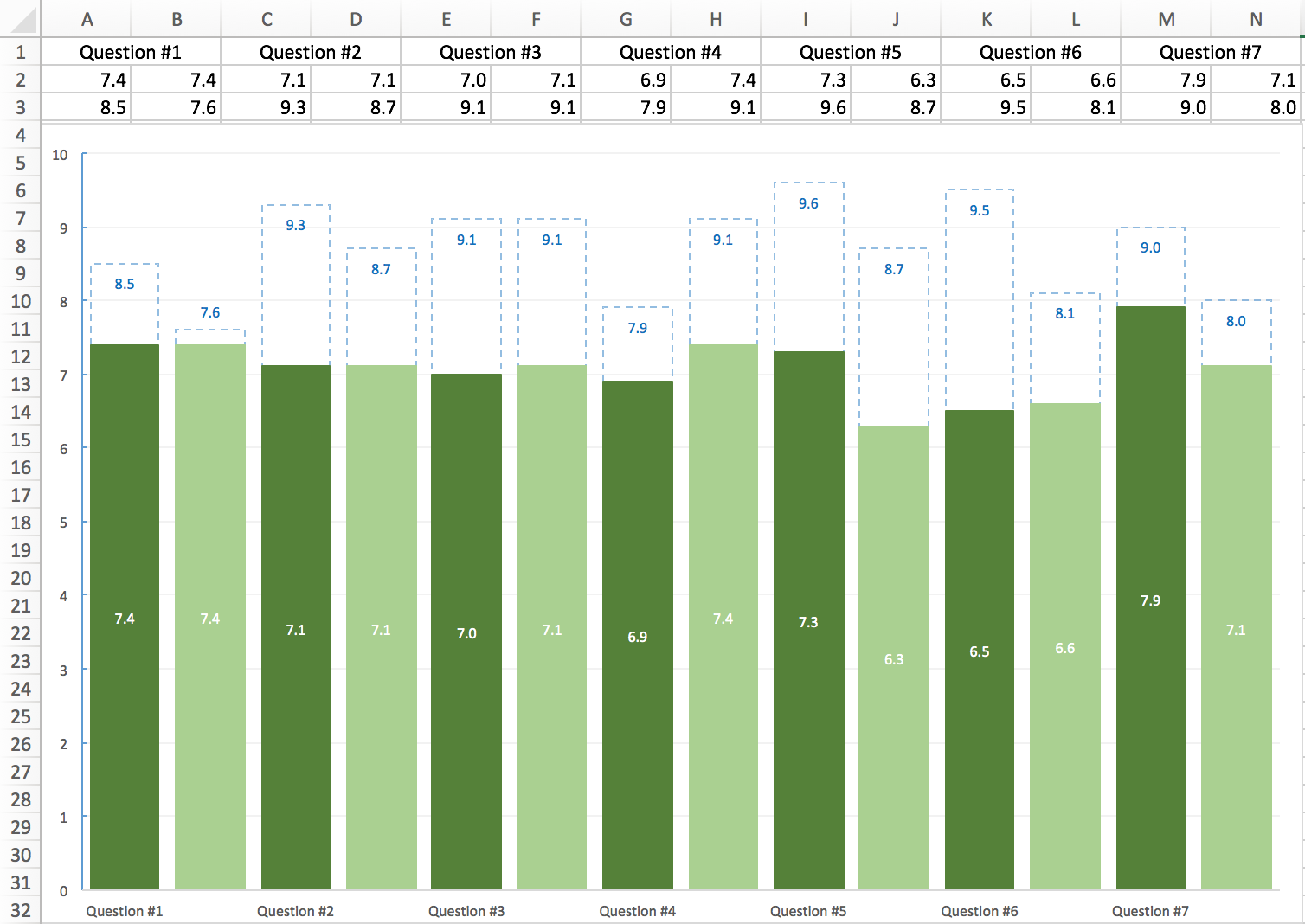 So if you need to expand this for more question, insert columns in between the data. The graph remembers everything except the even numbered column color scheme, so you then only need to go in and change the fill and border color to the lighter green and you have added to the graph... Oh and of course you have to fiddle with your solution on the centering of the Question numbers, but probably not as bad as having to do everything manually in OmniGraffle.

I know this is a bit obvious but you could try Google Sheets.

It's scriptable in server-side JavaScript so if it doesn't do charts like that (and I don't think it does) then you might be able to hack in a solution.

Not the answer you're looking for? Browse other questions tagged software-recommendation ms-office numbers .

1
Can Numbers create stacked column charts with two columns for each category?

4
Numbers 3 - How to apply custom chart style
3
Connecting MySQL DB to Apple iWork Numbers?
2
Updating a chart dynamically in Numbers
1
Can Numbers create stacked column charts with two columns for each category?
0
How to change y axis numbers in Numbers for mac to show as custom letters or words?
0
Can't open file Excel for Mac
2
How to color code individual data points in line chart