Is it possible to have pixelated graphics on a MacBook Pro due to a defunct trackpad? 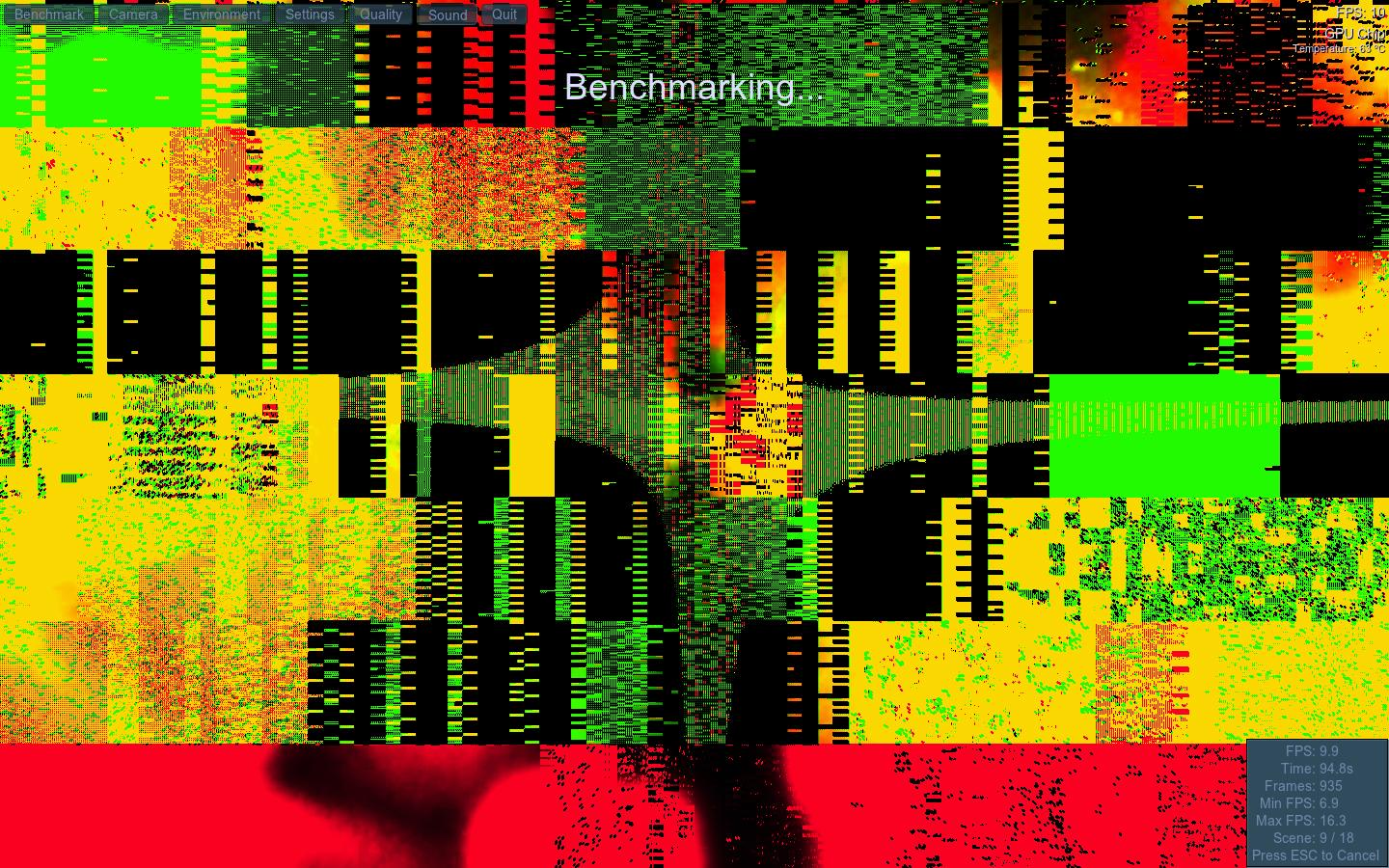 had availed of the logic board replacement scheme for 2011 MacBook Pro's with faulty (AMD) graphics cards. The laptop came back from servicing with a new (refurbished as I understand) logic board. But while running a benchmarking test (Unigine Valley) the on screen graphics are extremely pixelated.

The service center suggested it was due to a faulty RAM. So I purchased new identical RAM. Same issue. After months of struggling with AppleCare and Apple Exec relations, they first asked me to get a clean install of the latest OS. Once that was done, the feedback from their engineering team is now that it "could be" due to the defunct trackpad (condition since before the repair, and I use a USB or bluetooth replacement, instead of replacing it out of warranty).

Is it at all possible that the screen graphics are pixelated because of a defunct trackpad?

I fear I am being scammed by Apple to pay for a pointless hardware repair...

The trackpad is actually not connected - the cable connecting it to the logic board is gone, so it is just out of service / disconnected. I am running stock OS and it works fine. The benchmarking tool works fine on other MacBook Pros. The trackpad has been out of service since before the repair, and this problem with the benchmarking test is after the repair. So I believe it is unrelated.

It's very common for one component it's connected electrically to another component to cause noise and other issues. Whether it's the most likely cause is debatable, but Apple's service centers have direct access to engineering and a huge wealth of repair data so they would be my first authority to go to determine what is likely and what is not.

Without the detailed diagnostics from your specific repairs as well as the actual service manuals it's hard to second-guess Apple.

Apple provides a nice (IMO) warranty of 90 days and any repair, so it's hard to see how they would be scamming you. If you set down and catalog each interaction with AppleCare, have you spoken with them 10 or 20 times?

Also you need to collect all of the written estimates and repair details to know what components have and have not been examined by a technician.

The only time I've known Apple executive relations to be unable to resolve A customer issue is when Apple has already bent over backwards to accommodate their responsibilities and person requesting the repair is the one being unreasonable. I certainly wouldn't accuse you of that with the little data presented, but if you really still unsure collect the facts and data you have and give it to someone who is somewhat impartial and have them give you their opinion.

Also, a final note - unless you are running stock OS or an apple benchmark, I've seen all sorts of gfx card mods and graphics tools cause exactly what you see. My guess is Apple knows other parts to be good and is guessing the trackpad is the most likely of the ones that remain in tested.

I would ask them the cost of a depot repair, and you'll have to be Ok with paying for it if they replace parts - even if the benchmark fails to run. If your Mac boots the normal OS fine, I would not pursue further repairs till the situation deteriorates.

Not the answer you're looking for? Browse other questions tagged macbook-pro hardware trackpad graphics gpu .