Use AirDrop between iPhone and older Macs (need “Don't see who you're looking for?” button on Mac)

I have a new Mac Mini, an old MacBook (which supports AirDrop but has on old Bluetooth module) and an iPhone.

When I need to AirDrop between my macs, in Mac Mini's AirDrop panel appear a button "Don't see who you're looking for?" which allow to work even with Macs with old Bluetooth module and Macs see each other.

Now I need to AirDrop between my MacBook and iPhone but, on my iPhone I can't find the "Don't see who you're looking for?" button so AirDrop doesn't work.

I tried this but it doesn't work...

Is there a way to solve?

What you need To share content with AirDrop, both people need one of these devices using iOS 7 or later, or a Mac with OS X Yosemite:

To see if your Mac works with AirDrop, make sure you’re in the Finder by clicking the desktop (the background area of your screen), or by clicking the Finder icon in the Dock. Then, check to see if AirDrop is listed as an option in the Go menu. If you don't see AirDrop listed, your Mac doesn't support this feature.

In order to transfer files between a Mac and and an iPhone, iPad or iPod touch

The Mac Pro (Mid 2012) does not support AirDrop with iOS devices.

For help identifying your Mac, choose About This Mac from the Apple menu. You can refer to the Apple Support website to find out if your iPhone, iPad or iPod Touch includes a lightning connector.

So, sadly, there is no known hack to make it work with iOS devices and older Mac's. Would be a great feature though! 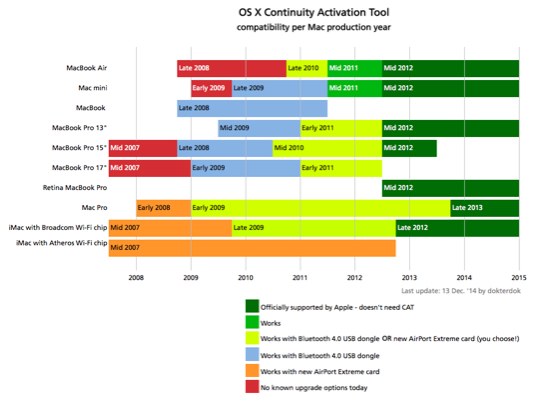 Not the answer you're looking for? Browse other questions tagged macbook-pro iphone mac bluetooth airdrop .

10
Why doesn't AirDrop work on older network adapters?
2
AirDrop iphone to MacBook
6
Why is Airdrop not available between iPhone and old MBP
2
Airdrop between newer and older macs without clicking the “Search for an older Mac” button
15
How to change computer name as it shows up in AirDrop?
5
AirDrop between Mid-2013 MacBook Air and iPhone 6S not working
2
AirDrop doesnt work on Macbook Air 2012 and iPhone 6S
1
Need help using AirDrop between iPhone 8 Plus and MacBook Air