I love my iPhone 6 :) But I'm fully bilingual in Spanish and in English, and about 50% of my emails are in each language. Here's the problem. While my iPhone is in English, every time I write an email in Spanish, every single word it automatically changes to the closest English word! Argh! And as if this wasn't bad enough, unless I click on the "quoted" option, it just keeps doing it grrrr. This makes writing in the other language very, very tedious - to the point where I can't.

I'm wondering if there's a way to configure iOS or the dictionary or an app or something so that the spelling suggestions can use the dictionaries from both languages together, or something else that achieves that effect?

You have to activate the corresponding keyboards on Settings > General > Keyboards > Keyboards. Then when writing on each language, tap the world icon to the left of the space bar to switch between languages. The spelling check, prediction and dictionaries will be independent. The voice recognition also switches with it. 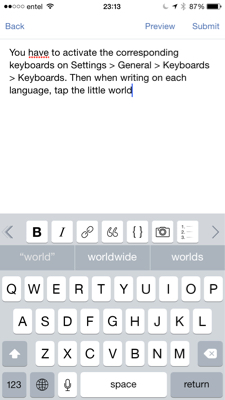 If you keep the globe pressed, a list will pop up, and you can chose the language directly. 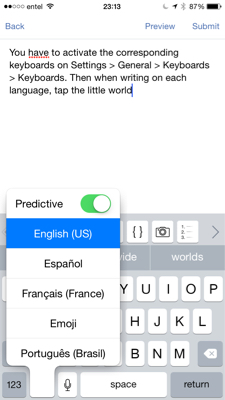 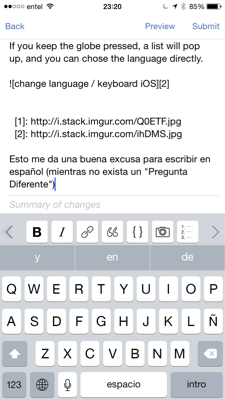 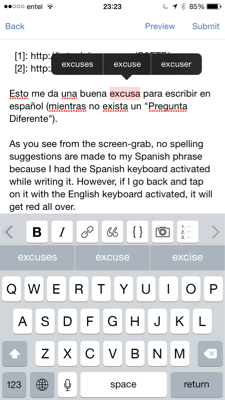 Check out Swift Key, its an alternative keyboard app for iphone and it allows you to have two dictionaries active at te same time. I write words in English and in Spanish in the same text all the time without the need of changing dictionary over and over.

This is a review that I found.

One of the biggest third party keyboards on Android, SwiftKey was quick to announce its support for iOS 8 following WWDC back in June.

The main thing to say about SwiftKey is that it's clever. Yes, it has a nicely executed swipe-to-type system, but it's the way it learns that's really impressive.

SwiftKey observes how you type and adjusts its word predicting suggestion system accordingly. It'll even tap into your Google and Facebook accounts (with your permission) and see how you type there too, and if you've used SwiftKey before on Android you can tap into that existing data.

It's also BILINGUAL, so you can type in two languages without having to switch between character sets.

iOS 10 includes a “multilingual typing” feature. It can handle 2 languages at once. This list of keyboards for which it works is at

Not the answer you're looking for? Browse other questions tagged iphone ios dictionary spelling .

2
What is the difference between the variant language dictionaries in OS X?
2
Choosing Dictionary.app spelling language
9
How to selectively enable autocorrect based on language?
9
Configuring a Mac to use Oxford spelling
1
Is there any way to translate words in Safari on iOS and Mac?
5
Multiple languages and Emoji button on iOS keyboard
0
/Library/Spelling not found