How to edit Safari form values?

I would like to be able to selectively edit specific auto-fill form values in Safari - rather than just delete the entire form data for that site.

I know I can do the latter from Prefs > AutoFill > other forms > Edit… but I'd rather be able to remove only the the oddities my errant typing appears to have generated, rather than the actually useful auto-fills I already have in there.

As an example, from the Edit panel in Ask Different itself, I appear to have several aborted versions of "Formatting". I would rather have just the 'correct' entries. 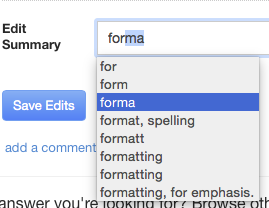 A guess would be that the data resides in ~/Library/Safari/Form Values but that file seems to be either encrypted or perhaps binary - I can't tell which.

~/Library/Safari/Form Values is a plist file, but it's encrypted with AES-128. The encryption key is stored in the System Keychain as Safari Forms AutoFill.

You can decrypt this file with the decryption tool found here:

Not the answer you're looking for? Browse other questions tagged safari auto-complete .

0
how do I fix incorrect autocorrect in Safari?
1
Decrypt Safari's Form Values file
2
Is it autofill, or does it have another name?