Launch an older version of an application by default?

There are two sets of applications where I'm running into this issue:

When iWork first came out I tried telling the system to open all .numbers, .pages, and .keynote files with the '09 versions of the applications by default, but it ended up ignoring that preference and launched the new versions anyway. As such I've gotten accustomed to just going to the Applications folder, opening up the old version manually, and then dropping whatever I want to edit into the open app.

Office is a bit more integral to what I do, however, and I'm really not looking forward to having to do more of this. Is there some sort of setting, terminal command, script, etc. that I can set to force the use of an older version by default?

If you want to open specific file types with a certain default application, e.g., .docx or .pages:

1) right-click on any of those files, hold down the option key and click on "Show Inspector". 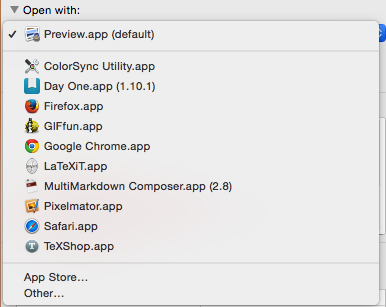 To open a file with the non-default application from a terminal, you can use open -a path/to/application file.

From the man page:

The open command opens a file (or a directory or URL), just as if you had double-clicked the file's icon. If no application name is specified, the default application as determined via LaunchServices is used to open the specified files.

The options are as follows:

Not the answer you're looking for? Browse other questions tagged macos ms-office software-update iwork .