MacBook Pro only turns on at specific times after cleaning

My MacBook Pro has been running fine for the past year. Two days ago when I tried to clean my MacBook Pro with a dry cloth, I heard a half chime sound while I was cleaning the keyboard. Since then my MacBook is not turning on during specific time.

I tried to turn it on until 2am (GMT+5) and nothing happened but when I turn it on after 3am (GMT+5) it turns on normally. When I try to turn it on in the afternoon (after returning from job) it doesn't turn on. This sounds really stupid but I have observed it for two days. I don't what has happened or what to make of it.

It charges normally no problem with that. It doesn't turn on even when battery is fully charged.

Has a schedule been set up? Check in Preferences > Energy Saver. Look at the bottom right under Schedule. You didn't do the cleaning with the power on? Did you hit a shortcut key combo? Here is a shortcut discussion with some common ones to check.: https://support.apple.com/en-us/HT201236 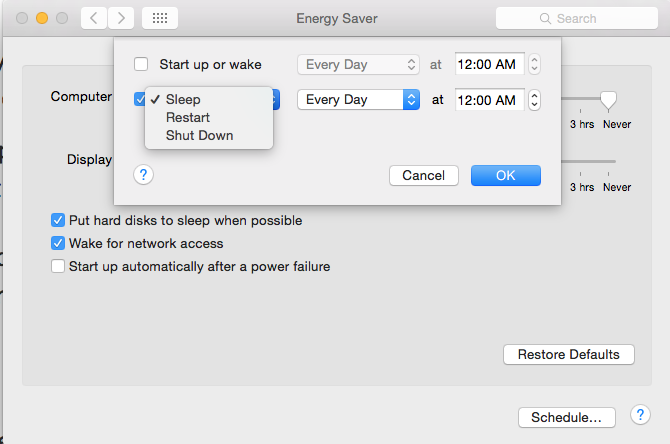 1
MacBook Pro only Charging when Turned Off
1
MacBook Pro froze and rebooted into Recovery HD
1
Connected new charger with Macbook Pro. Both Macbook Pro and Charger stopped working. Any reasons?
5
Coffee spill on MacBook Pro Retina
0
MacBook won't boot on Yosemite after force power off
0
MacBook Pro does not power on sometimes
1
MBA bricked by water damage – test whether just keyboard broken?
1
MacBook Pro mid-2012 turning on only without battery connected
0
Macbook Pro 5,1 will only boot after multiple SMC resets