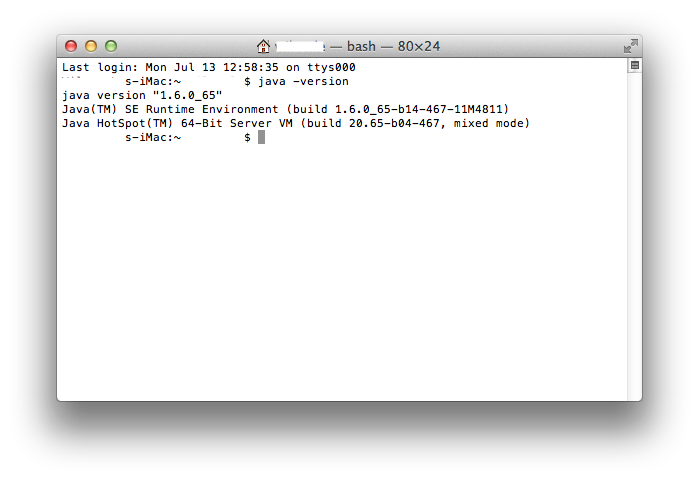 Whenever I started Minecraft up, it would immediately crash.

Hints for the problem:

I was having troubles with running a plugin, so I thought it was my java. After I did all of that, java wouldn't work at all. I tried to enter "java -version" in terminal, and it would say "unknown command".

After that happened, I went to Apple Java, and installed the most recent build, found here: https://support.apple.com/downloads/java

After that, I could type in "java -version" with no problem. After I restarted my computer, Minecraft wouldn't launch. When I try to run my own server, it starts up, and then it fails and crashes.

Do you have mods? Delete those first then try. To delete them go into application support then minecraft then mods and delete them.

Have you tried to Delete Minecraft on your computer and reinstalling it? (Not sure if you need to buy it again)

3
How to launch apps that require Java on Mountain Lion with only Java 7 installed?
1
How can I eliminate this repeated Java Runtime Environment (JRE) pop-up window?
0
Eclipse Fails To Launch Complaining of Incompatible Java VM
3
Can't update Java due to apparently newer version already installed
1
Terminal Crash on Macbook Air 2011, Mavericks
1
No compatible version of java 1.5 is available
30
How to remove Java 10? Or revert to the previous version?
1
Does macOS Mojave comes with java pre-installed?