I have a file (4alJRTP_.gif.part) in my downloads folder that won't seem to delete.

Every time I drag it to the trash, nothing shows up in the trash and the file icon remains in the downloads folder.

I also tried opening the file and a pop-up window shows up saying "'file_name.gif.part' can't be found". 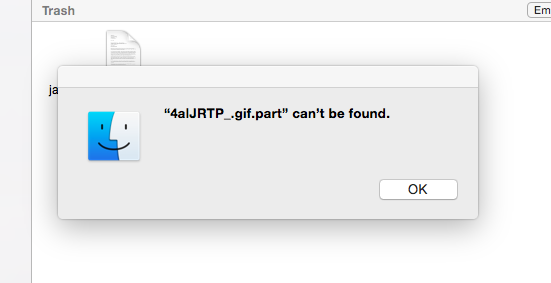 How can I get rid of the file icon in my downloads folder? Any help will be greatly appreciated!

Next, just make sure that the applications that might have used these are closed.

That warning out of the way, here is how you can do it.

In a moment or two the files should be gone.

The same premise works with the Trash folder as well, with a few modifications and you may want to do this as the file may actually be there but hidden.

In a moment or two (depending on how much was in your Trash), the Trash icon should return to its empty state.

To check to see if there are hidden files you can do this.

and then to hide them again you can do:

I hope that helps, and I really hope that you don't delete things you don't want to... These are powerful tools, and With Great Power Comes Great Responsibility.

The file that you are looking to delete, the one that says *.part is a file extension indicating that a file was downloaded partially.

This likely occured when Firefox, Skype, or another app able to download from the internet stopped a download mid-download.

Take a look Downloads on your browser, command-J on Firefox, shift-command-J on Chrome, and alt-command-L in Safari, and see if any of the files there has a partial download. You should be able to cancel the download there and then that file should clear up, or stop reappearing after you download it.

-- The answer I provided is based on the technique that I obtained from Joe Kissell's article on MacWorld and have used during the times I have not been able to empty my trash bin.

The method may depend on how comfortable you are using Terminal…

Have you tried to 'Secure Empty Trash'?

Not the answer you're looking for? Browse other questions tagged macos finder trash .

4
Unable to delete a file
4
Unable to delete a file/folder
1
Can't delete folder named __MACOSX
5
Folder disappears after dragging it into "All My Files" in Finder
2
Downloads folder is showing empty when it's not!
0
Locked file is stuck in trash
2
How do I get my Downloads files back on my Mac?
8
What should I do with the X11 Security folder after upgrade to Catalina?
6
Automatically Delete Files From Downloads Folder Daily Unless Tagged With "Keep"?
4
Desktop, Documents, and Downloads folders are gone after deleting Dropbox