Is there Spotify-Connect-Equivalent functionality for Apple Music?

I have an Apple Music subscription and iTunes 12.2 on an HTPC (Windows) which his my primary music player. I want to use my iPhone to control what I play. I've tried the Apple Remote app, which works, but it only allows me to choose music that I've added to my library. It does not allow me to look up an arbitrary song from the cloud (whatever the term for this is - it's the functionality under the "New" section of iTunes on OSX) and play it from the Remote. If I want to do that I have to do it directly on HTPC, which is not acceptable.

In 2018 - AirPlay and AirPlay 2 are the premier ways to play Apple Music. Most people will want to just connect their speakers to a computer or device and use Siri / AirPlay to queue up music.

If we go in a time machine back to 2015 - the situation was a little less clear, but using iPhone and Apple TV was still the best way to stream music over WiFi from many controllers.

(much of what follows is wrong and/or outdated, but were possible solutions at a past point in time)

The iPhone can AirPlay to a PC quite easily with software on the PC such as AirFoil for Windows and you're set with Apple's full fledged iOS music controls but taking advantage of the PC to speaker connection you have already set up.

Depending on how the PC outputs to speakers, you could also add hardware ($5 to $65) to get the sound from either the PC or the iOS devices to the speakers. You don't need to do that as there are several workable software solutions.

Not much of a solution, but it's worth noting that the last update to the Remote app (4.2.2) was released on May 21st, before the announcement of Apple Music. It wouldn't surprise me that a future update would address this unacceptable issue. 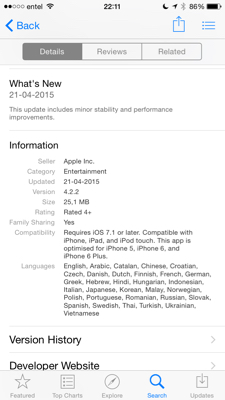 If it does not, I would immediately destroy my iPhone and buy a Zune.

iTunes allows you to send Audio/Music from the new Music service to multiple Air Play speakers. The Music App on the phone only allows one speaker. Without using a third party product like Airfoil or third party remote on a iDevice there is no way to control the Music service via iTunes natively within the Apple ecosystem. This is limiting for people that have set up iTunes at the heart of their multi speaker audio system. iPhone only act as remotes in my house, never the source.

Hopefully they will update remote quickly to give us this ability. It's the first thing I tried to do with the new service, and it is holding me back from using it more.

No. A feature equivalent to Spotify Connect is currently not available for Apple Music.

I have Itunes 12.2.0. I can play a radio station on Apple Music Radio and using the remote app by Apple, I can control my mac's iTunes playing Apple Music. So yes it is possible.

Not the answer you're looking for? Browse other questions tagged itunes apple-music remote.app .

1
Where is the search functionality in Apple Music?
1
Can I add song to an Apple Music playlist, without adding them to 'My Music'?
0
iTunes 12 Apple Music search: is there a way to play all songs returned by search?
5
How to disable Apple Radio in iTunes and iOS?
1
Why are many songs just not played in iTunes in Apple Music? How to force them to be played?
0
Can I keep my iTunes library after I get an Apple Music subscription?
1
How to use movement for classical music with Apple Music?