The App Store offered me the update to iTunes 12.2 as normal when it was released. I clicked install, it downloaded the update, and it appeared in the list of recently installed updates, apparently all as it should be. However, when I run iTunes it's still version 12.1.

I tried downloading the installer from the Apple website, which gets right to the end of the install process before giving this error message: 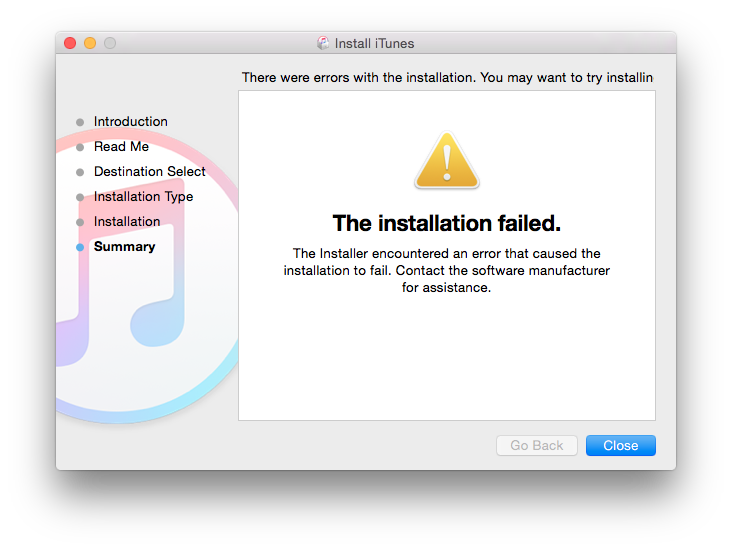 I also tried removing my existing iTunes installation via the Terminal. Running the installer after doing this gives the same error message, while installing it via the MAS after removing it appears to install successfully but leaves no iTunes app in the Applications folder.

I've since successfully installed updates to non-Apple apps via the App Store with no problem; all are correctly updated to the latest versions.

Huge thanks in advance to anyone who can help.

Looking at the install.log you pasted, one line jumped out at me:

I think that error says that the installer tried to run the preinstall script using the system Perl, but that the system Perl could not even be executed. Could you please run the command file /usr/bin/perl5.18 and tell us what you get? Here's what I get:

This is a basic hello-world program in Perl; once you get this working on your computer, I think your installer will work fine too.

Not the answer you're looking for? Browse other questions tagged itunes macos mac-appstore .

0
Unable to install Xcode on a freshly-installed OS X Lion
1
Update to iTunes 12.2 via App store
1
OS X 10.11.6 can not update iTunes 12.5.1, app store problem
0
Install app on iOS without using iTunes
5
Can't install updates from macOS App Store
6
iTunes cannot run because some of its required files are missing