See the bottom for an update on what the stain might have been caused by.

I'm disappointed to find that there's nothing I can do (that I know of) to restore my Apple Watch Sport's white band to its formerly clean state. Somehow, it became slightly purple in one area. I'm not sure how things have added up, but I'll state the facts:

I'm frankly concerned that this thing will never come off. I did research on Apple's policy on returning bands, etc., and though I need to confirm, it sounds like any discolored or warped bands will not be accepted for replacements.

Note that the texture of the stained part of the band now feels different from that of the rest of the band, almost like it's more rough. Also, the other half of the band, which was very dirty, washed off just fine with only water and a microfiber cloth.

Here are some pictures of the stain (see descriptions for more details): 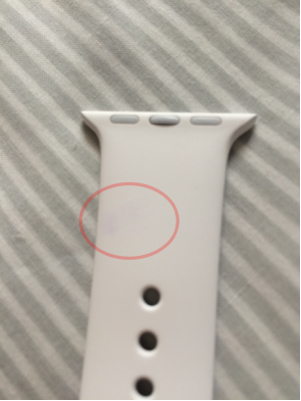 The stained half of the band, with the purple stain circled in red. 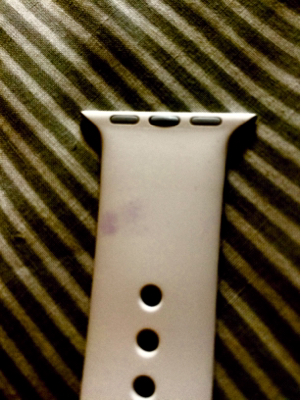 The original photo of the stain edited for contrast. The purple stain is clearly visible here. (Note: The only editing done here was lighting and contrast changes that can be done in the Photos app on the iPhone. I did not Photoshop this or alter the stain itself, etc.)

Update: I just realized something that may help get the stain off. I never got the chance to follow bmike's advice; I will likely ultimately follow it, but for the time being, I was hoping that this might help find something that I can do myself to clean it.

Check out this photo: 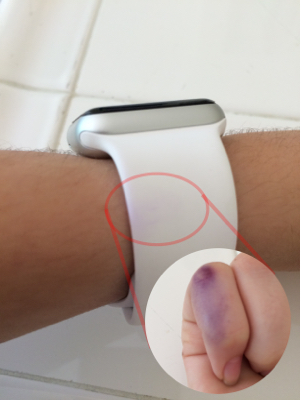 I do a lot of handwriting. Yes, that is my pinky, covered in pen ink, which turns purple when there isn't a thick layer but a thin one over it. Coincidentally, my watch band was stained purple. It adds up to suggest that it's a pen ink stain, which I doubt is more temporary than permanent.

Thus, I suppose my question has changed:

Is it possible to remove pen ink stains (just a typical black ballpoint pen) from a white Apple Watch sport band without damaging it? If so, how? Or is it wiser to just take it in to Apple and see what they can do to help?

Apple's warranty policy allows them to not cover cosmetic damage to parts however, they may not choose to deny a warranty swap if you present the band for service and are reasonable. (I don't think you'll be angry, just that I've seen people totally ruin things by rude or boorish behavior when they are angry and seek service with aggressive language or worse).

I would print out or be very familiar with Apple's cleaning guide for the product. They may decide to take back some parts for quality control that wouldn't normally be exchanged since the product is so new.

Do be aware that toilet paper is not lint free cloth and many brands may not even be non-abrasive. The only cleaning agent Apple recommends is water so be sure to understand if they charge for a replacement if you don't follow their recommendations. Better to take the dirty band in and ask if it's cleanable than to show up after you expanded the list of techniques.

Even if you did resort to harsh methods, asking for help is still worth its IMO.

I apologize for my somewhat long-winded, poor question.

As it turns out, I've found the answer myself: time. I used the cleaning methods outlined by Apple, only using my fingers, a towel, some water, and a microfiber cloth, and over the weeks the stain has faded.

Thanks for all your help.

Use a Magic Eraser. They get stains off of anything.

Mine was completely blue on both sides. Tried everything from spray and wipe to baby wipes. Tonight I decided to try eucalyptus oil and the stains came straight off. It's like a new band!

Hydrogen peroxide might be your best bet. It's pretty close to water and it's great for removing stains from silicone. Like bleach, Hydrogen Peroxide is an oxidant which is great for breaking down color stains.

The band has obviously come into contact with something it is chemically incompatible with. Based on the size and position maybe you leaned against something, or spilled some gas on it when filling the car?

Chemical damage can't be cleaned. Either live with it, or get a new band.