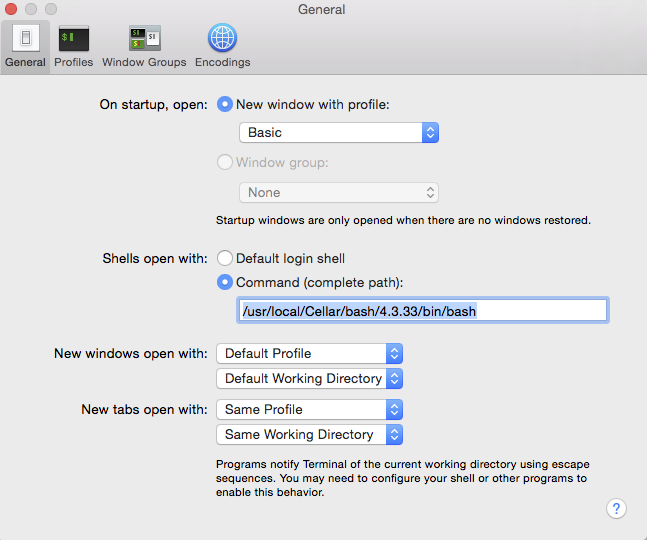 You can update bash by doing

assuming that you already have Home-brew. This will install the latest version of bash. You can check you installation by running -

To update the shell, simply restart the terminal and check the version of bash using -

270
What are the practical differences between Bash and Zsh?
12
Why does OS X have bash v3.2.57?
9
Why does Apple ship bash 3.2?
3
How to show vi mode in bash?
2
In Terminal, using the "touch" command to mass create consecutive files with leading zero's, with bash, produces different results than zsh
1
update/upgrade bash without homebrew

7
Are Bash, Bourne, and Korn shells compiled into one binary in OSX?
0
Why is same privileged bash command giving different information from script than from command line?
5
Using 'alias' in bash script in OSX
6
Bash Ctrl-A Returns to Start of Line but Doesn't Display Properly
0
Abort Trap: 6 bash / cd
2
"bash" command runs scripts in version 3.2, not 4.4
9
Now that MacOS Catalina has moved to zsh, can I upgrade bash 3.2.57 with 5.0.3?
1
update/upgrade bash without homebrew