Can someone explain what 'diskutil cs revert' does?

so I was following some instructions to get my windows bootcamp partition to resize in disk utility, because after upgrading to Yosemite I was unable to resize my partition to give one side more space (although I had free space). I followed the commands I saw on multiple different support links and they all seemed to be the same and worked for those who had problems, so I followed it through and it did indeed work. It was to find the logical volume id though the

However, In disk utility my main disk (the one at the top) has been renamed to the name of the SSD hardware with my two partitions underneath, rather than just 'Macintosh HD' with the two partitions. 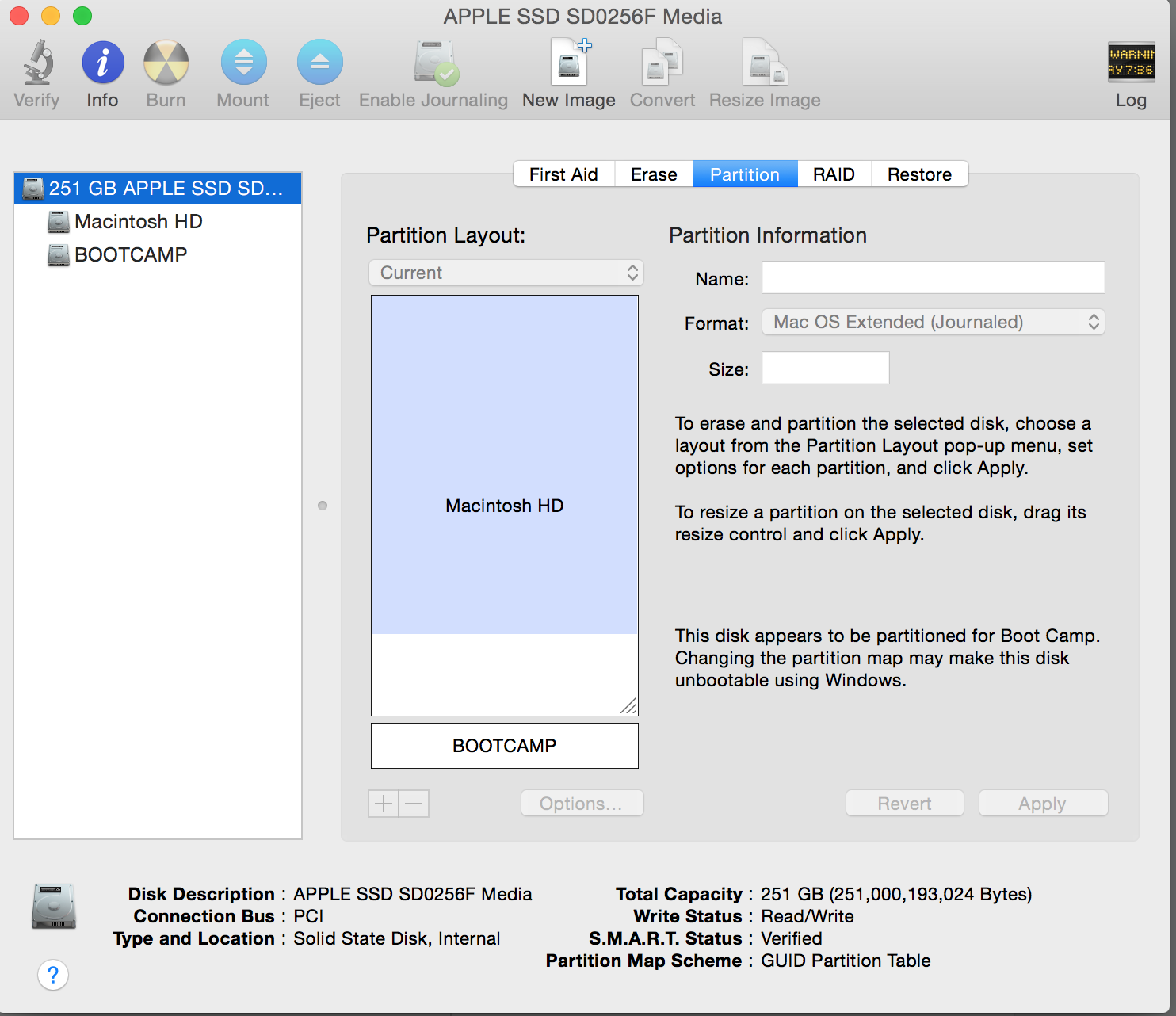 diskutil cs revert turns off the Core Storage volume manager for that volume. The Yosemite installer turns it on in case it's needed later (mostly for FileVault), but if you don't actually need it (e.g. for FileVault a Fusion disk) it doesn't do anything useful.

If you aren't using FileVault or a Fusion disk, what Core Storage mostly does is confuse Disk Utility, limiting its ability to dynamically resize and rearrange volumes, and preventing it from displaying the disk structure properly. That "251 GB APPLE SSD SD..." thing is what Disk Utility should be displaying there, because "Macintosh HD" and "BOOTCAMP" are both volumes within the physical SSD. With Core Storage, it was showing BOOTCAMP as somehow part of Macintosh HD, which it isn't at all.

Not the answer you're looking for? Browse other questions tagged ssd disk-utility partition core-storage .

3
OS X Partition not resizable
39
Resizing or expanding a CoreStorage volume
1
Resize Mac Partition is Disabled - how to partition properly
3
How can I resize a partition on OSX 10.10.5
0
How can I encrypt a disk where diskutil cs convert reports "a problem", leaves disk unreadable?
1
How Do I restore my computer's SSD to a new larger SSD?
2
Reset and reformat external SSD to APFS
1
Disk Utility hangs after adding a partition with gpt; diskutil still works just fine
2
Why does "diskutil eraseVolume ..." add an extra "Apple_Free" partition