I have entered a weird state

Firefox was open. The icon appears in the cmd+tab task menu.

In the dock it shows as "not responding". Force Quit does nothing though. 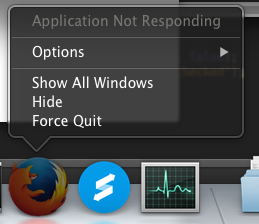 Ok... but then it doesn't show in Activity Monitor either. I have searched for "Firefox", "fox", "ff", "mozilla" and skimmed through by eye.

I have also tried grepping the output of ps aux and top in terminal but I can't find it.

I wondered if maybe it wasn't really open and just the dock icon/task switcher were confused, but when I double-click Firefox from the Applications folder:

I have tried relaunching Finder but it doesn't fix anything.

I assume a reboot will fix it, can anyone suggest another avenue?

This is what I answered in a similar question. It did the trick for me.

I had the same problem with NetBeans and this is what worked for me:

I based my answer in this post: Can't kill Preview app and in previous knowledge.

Not the answer you're looking for? Browse other questions tagged macos firefox activity-monitor applications .