Is screen zoom broken in Lion?

It was very useful when giving demos and when wanting to zoom in on a YouTube video.

What am I doing wrong, or is it just broken?

I had this problem with Leopard and it continues in Lion. The only solution that works for me is to reboot. Changing the settings in system preferences does not work on my machine.

You now have to manually enable it.

I experienced a similar problem in the Developer Previews of Lion. A restart always fixed it.

I've not had any problems since I installed the GM public release build.

If you are experiencing such problems I suggest sharing feedback, and filing a bug report.

Several answers contradict each other, so I wanted to make another answer to pull together some of the ideas that seem (to me) to be the root behavior of zoom failures: 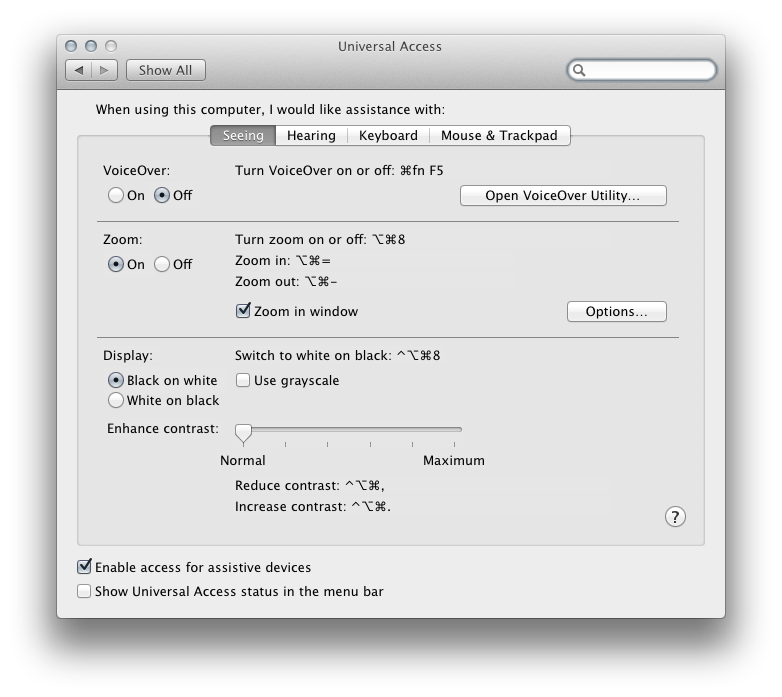 Once zoom is "broken" a reboot will make it work again temporarily - it recovers from the failure, but doesn't prevent it from recurring again. The new zoom in window feature seems to work reliably - the window zooming will work when normal zooming is broken - you can turn that on to nudge the zooming without a reboot.

All of the above are "facts" that I've seen and reproduced on more than one Mac as well as seen more than one time on each mac that has had the problem.

My speculation is the new window zoom features (which are amazingly cool) is causing the tried and true older zoom function to have problems as the machine runs and some process crashes or some memory gets corrupted. Switching to Zoom in window or rebooting clears up this corruption or restarts whatever process needs serves the zooming temporarily.

My primary mac seems to fail to zoom somewhere between 8 hours into a boot and almost certainly after a day or two of use. I haven't tested a log out / log in to clear things up (yet) - but it's a near certainty it will be back within 48 hours for me to poke at it some more and see if I can see what is crashing...

I adjusted the size of the "zoom in window" to cover the entire screen real estate; works as an adequate substitute for the big fail on screen zoom.

My zoom, for some reason, breaks when Lion goes to sleep. To fix it I just go to universal access turn zoom off, and then back on. When its is broken the radio is on but the stuff beside it is greyed out.

It is still broken for me in the 10.7.2, it does work very erratically…

My workarounds are to:

I have found a solution. In Universal Access > Seeing Tab -- select Zoom in window as usual. Then, select Options > Use scroll wheel with modifier keys to zoom. If you have Enable temporary zoom... and the scroll wheel options selected... if you 'scroll out' on your mouse the zoom window will disappear once zoomed all the way out. Then, when you need it, hold command in scroll in with the wheel.

This resolved the problem in my case

If that doesn't work, this other solution temporary fixes the problem (so you don't have to reboot):

8
Where can I go to make enhancement/feature requests for OSX Lion?