There is some sensitive data (credit card numbers and such) that I store on my hard drive, encrypted. I use a script to decrypt the data and display it in the terminal window. When I am finished, I would like the script to clear the terminal, so that the sensitive data can no longer be viewed (even if someone gains access to my computer).

I have read here that ⌘+k clears the terminal output. To implement this in a script, I used AppleScript as suggested in the accepted answer to this question:

Finally, my script closes the terminal window with

The problem: if I leave the terminal window with the sensitive output open for about 30 seconds or longer before closing if, then the next time I open terminal, it restores the sensitive data (the text [restored] is displayed below it). If the data was initially displayed for less time, it is not restored.

How can I clear the terminal window from within a script, and prevent Terminal from restoring the cleared data?

Then, make that folder read-only so that it can't be written to.

You can use the clear command to clear your terminal window from within a script. As noted on this other thread, the following commands in sequence will clear the current buffer, then the scroll back buffer:

Please note:
(The clear command looks up the appropriate sequence for clearing the screen for the current terminal, but the “erase scroll-back” escape sequence is custom and must be hard-coded. If you put this in a shell script that you don’t know for certain will only ever be run with Terminal, you should check that $TERM_APPLICATION is Apple_Terminal before sending it.)

You can also store sensitive information in the Secure Notes section within the Keychain Access utility. 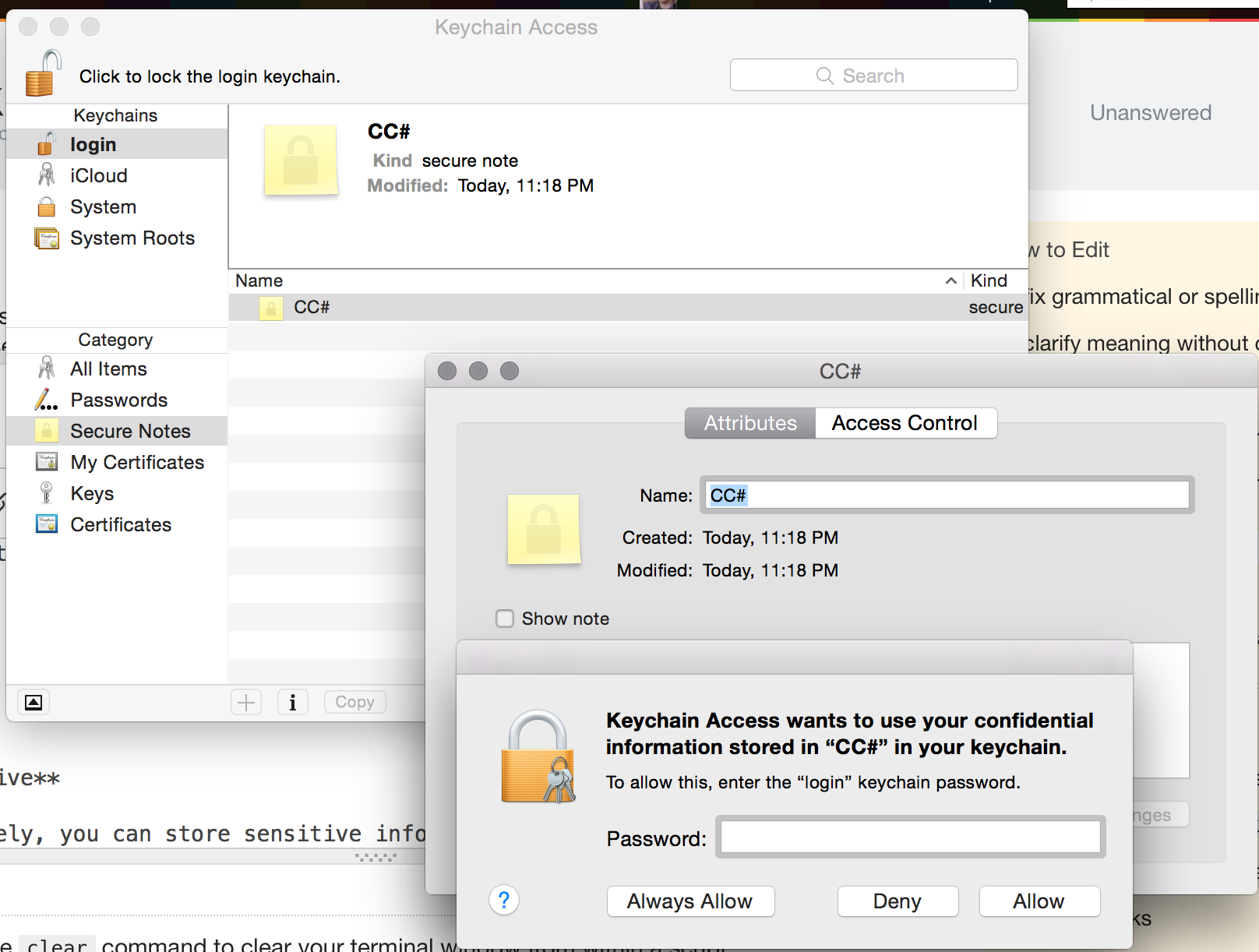 After reading the other answers and looking into this myself I have observed some file system behavior, which implies a very simple solution. The terminal program stores it's data in

as noted above. When I quit the entire Terminal app (cleanly) this entire folder is deleted. The reason the OP is getting restored data is because he is crashing the terminal app with killall. I observed this by opening finder to the Saved Application State folder and starting and quitting terminal. The down side of this is that you have to close ALL terminal windows, but in this way all saved state appears to be wiped clean (baring disk forensics of course)

There appears to be one file in this directory for every open terminal window (but not every tab!) plus data.data and windows.plist and window_1.data that presumably represents the terminal program itself. The per-terminal files disappear on the closing of the window however the data.data file is the one that grows as commands are issued and thus presumably stores the scrollback buffer. It does not shrink on the closing of the terminal window implying that it continues to hold scrollback data. The data.data file does however shrink when the next terminal window is opened. It also shrinks drastically when another terminal window is updated (by pressing return for example). Thus it appears that the following routine will (probably) wipe the scrollback data completely:

It's also worth noting that the data.data file is not a text file. It is a binary file that will require effort to interpret. My guess is that the data is compressed in some way. A simple cat of the file reveals nothing legible. So for these files to be a vulnerability, it seems both of the following must be true:

PLEASE NOTE: the above is based entirely on observation of how files appear/disappear and how their sizes change. It is of course still possible that some partial information is retained if the maintenance of the data.data file is sloppy. However these observations seem good enough for me. Decide for yourself if it's good enough for you.

These observations come from OS X 10.9.5 and Terminal Version 2.4 (326), please verify the above described behavior if you are using some other version before relying on this advice. Any or all of this could change with new versions of terminal or Mac OSX.

just send the output to /dev/null

If you need to view or store the output, then redirect it to a file for later use your_commands > path_to_filename/filename_where_output_is_stored

60
How do I reset the scrollback in the terminal via a shell command?
36
Completely clear all output from a Terminal window