Flash is not supported in OS X Lion i.e. Safari, how can I browse webpages with flash content and actually view the flash content?

Adobe Flash Player is supported in Lion (Chrome works by using its own copy of the plug-in that you can disable) and Safari uses the Plug-in installed in your personal libraries folder:

or in the system-wide libraries:

Lion, however, doesn't ship with Flash player installed by default (I'm not 100% sure because I haven't had Flash in a long time), but that doesn't stop you from installing it.

Head over to Adobe's FlashPlayer download page and select 10.4-10.6 as your operating system: 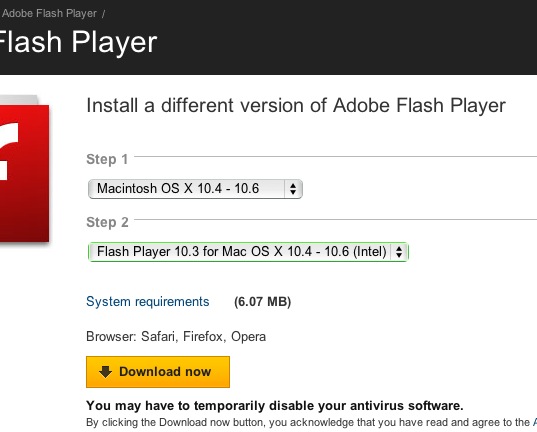 So as you can see there is not a 10.7 version yet, so there are some issues. At first it was said that Lion disabled the Hardware acceleration of Flash; Adobe later retracted that when they found out it was their own bug.

The final release of Mac OS X Lion (10.7) provides the same support for Flash hardware video acceleration as Mac OS X Snow Leopard (10.6). The previous “Known Issue” described in a tech note suggesting that video hardware acceleration was disabled in Lion was incorrect and based on tests with a pre-release version of Mac OS X Lion that related to only one particular Mac GPU configuration.

If you are brave enough, you could try the BETA version (used by developers) that is theoretically the version that will be released for Lion.

Those Betas are available Here.

Were did you heard that Flash is not supported in Lion?

Flash is very well supported, I have it running in Safari and Chrome and it works fine.

Not the answer you're looking for? Browse other questions tagged macos safari adobe-flash .