When I right-click the Downloads folder in the dock, and select Open "Downloads", instead of the expected thing happening, an app launches.

The app is one I created myself using Automator. And it is on the Desktop. I can move it anywhere and rename it, but this doesn't fix the problem.

Other steps taken to resolve:

Why is this is a problem? Because I want to create Automator apps without them being launched by right-clicking the downloads folder in the dock.

Edit: This is the workflow of the app that launches: 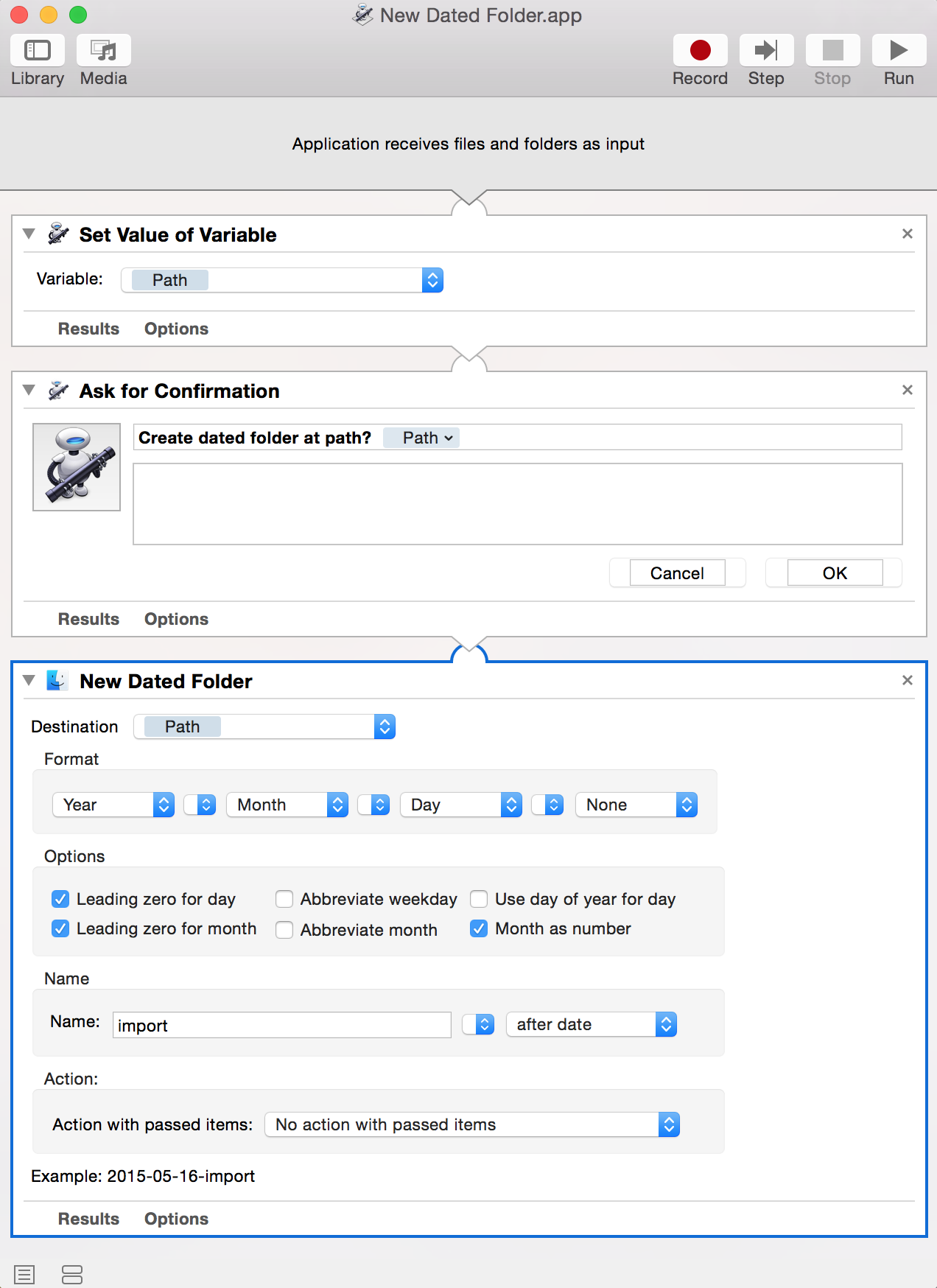 Answer for my own question...

I mistakenly changed the default application for opening folders (!) away from Finder to an application of my own creation. I didn't know this was even possible! Needless to say this had some weird side effects, like the problem I originally described. But I figured it out – I mucked up my system with an erroneous QuickSilver command.

I'm always creating dated folders, so I created an Automator app that, given the current folder, would create a folder within using the date as the name.

When teamed with QuickSilver's "Current Selection" trigger, the app becomes useful. I can call my "create-dated-folder.app" from the current folder, using "Open with..." in Quicksilver's second pane, and my app in the third. Works great.

My mistake was, instead of "Open with", I once chose "Always Open With", which changed system settings I didn't know existed – it changed the default application for the "public.folder" UTI from Finder to my Automator app. Then the weirdness began, like if I chose "Open Examples Folder" from Automator's help menu, my app would be invoked. I really had no idea what was going on!

Brilliant tip from to Tetsujin who suggested RCDefaultApp would be worth investigating.

Not the answer you're looking for? Browse other questions tagged macos finder automator dock .

1
Drag application from Downloads folder to Applications folder in the Dock overwriting an existing application
3
How can I set up a shell script as a wrapper to the main executable of an app?
1
How to get Mac App Store to stop thinking app is installed on external drive?
4
How to quit an app in OS X Yosemite
0
Automator: “Ask for Text” pass to “Rename Finder Items” possible?
2
Hide Parallels's VM icon from the dock
0
How to remove additional vertical line from dock created by Automator app