When I go to send a text message on my Apple Watch, whether it be through Siri or the messages app, it always tries to send a text message (green) rather than a iMessage (blue). I have tried turning on and off iMessage, restarting my iPhone and Watch, unpaired and re-paired my watch, and setting it up again as new. My watch will appear to try to send a regular (green) text message through my phone, but will get stuck on "Sending..." even though the text actually gets sent. I can send iMessages just fine on my iPhone. The people in my contacts who I am messaging do have iPhones and their contacts are set up as having an iPhone. 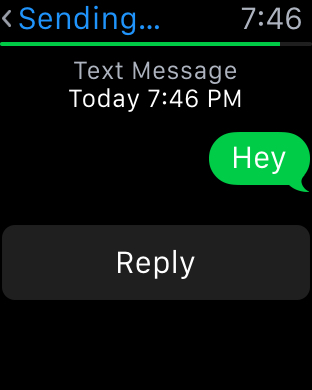 And a little while later, my watch will say that the message failed to send, even though they were sent: 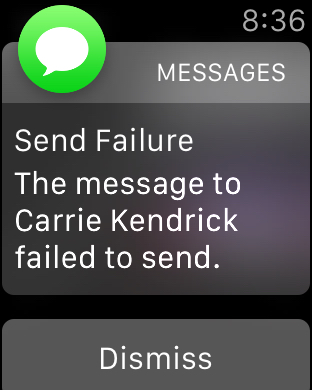 As you can see below, texts from my Watch end up sent as regular text messages, while texts from my iPhone to the same person get sent as iMessages. In the end, how do I get my watch to send iMessages? 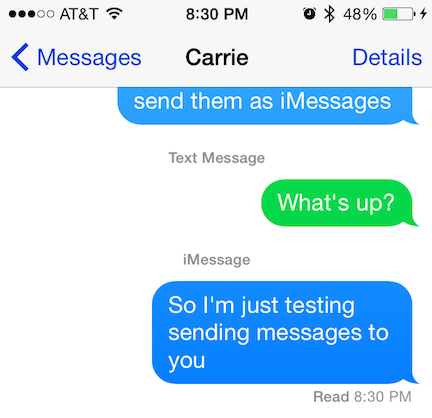 I had an Apple Store Genius appointment a while back to try and resolve this. At the time I was running the iOS 8.4 public beta and I was told to wait for final release of iOS 8.4 to fix my problem, as the Apple employee was also experiencing the same problem and was also on the beta. Now with the final release of iOS 8.4 out, I've updated and it still doesn't work. I'm also updated to Watch OS 1.0.1.

My Watch will also occasionally tell me that my iCloud password is "incorrect" and that I need to sign into iMessage/FaceTime again (my password isn't wrong, I've done this multiple times). Although it seems to only ask me this when the Watch dies or is manually restarted.

I had the same issue. I also had two step verification switched on. When I restart my apple watch my iPhone asks for the iCloud password.

What it really means is go to appleid.apple.com and log in and go password and security and generate an app specific password for "iMessage and FaceTime”. Put that in (including the dashes) when it asks for the iCloud password and hopefully it should work :-)

Try toggling iMessage off and on again. I find that this fixes many iMessage problems especially after a system update.

This worked for me when I had the same problem of not being able to send messages from the Apple Watch.

Go to Settings → Messages → Send & Receive and make sure that 'Start new conversations' is set to your phone number, not e-mail.

I just reset the Watch holding down both side buttons until the Apple Logo appeared and it worked fine. In my case the messages were not getting sent in iMessage, just as SMS. The reset fixed the issue.

I signed into iCloud and fixed the problem.

I had to reset my watch and it finally started working again with sending messages by iMessage. I have iOS 9 and watchOS 1.0.1.

Not the answer you're looking for? Browse other questions tagged messages iphone apple-watch .

1
My 4S won't see my wife's new 5S as iMessage-capable -- how to fix?
12
How do I send text messages to non-iPhone owners using the iMessage app on a Mac or the Messages app on an iPad?
0
How do I forward iMessages from my computer to my Android phone?
2
How do I make a voice-reply via Apple Watch send, and not delay by a variable amount of time?
6
How did my Apple Watch answer a phone call after my iPhone's battery died?
1
Why do iPad SMS / MMS fail to send?
2
Apple Watch can't send/receive SMS while using cellular plan