How to manually add an artwork to the iTunes Artwork directory?

I would like to add an artwork to an album which has files saved in .wav format. I know that it is not possible to attach an artwork to a wave file, so I'm trying to add a standalone artwork.jpg file to the album in iTunes.

I found out that:

Note: The album is not available on the iTunes store, so the album hasn't got the official artwork which could be downloaded by iTunes on its own.

Note 2: the traditional way of adding an artwork using Get info does not work for .wav files.

It turns out that it is possible to add an artwork to any album in iTunes. The format doesn't matter.

There is one more problem however: it is not possible to add an artwork to an album which has only one track.

Is there a way around it?

Just find the track [or the entire album] in iTunes, select it then hit Cmd ⌘ i to get info.
Select the Artwork tab then drag your picture from Finder into there.

Unfortunately, this appears to work for just about any format except WAV.
This also applies to an overall 'album' artwork added to the folder rather than files. It will only work if they are not all WAVs.

I'd suggest perhaps converting to AIF, which would be a completely lossless conversion.

I do that all the time..
Wav. / Aiff. file - Get info. Open the .jpeg file
Copy Command+C and Paste Command+P into the artwork. 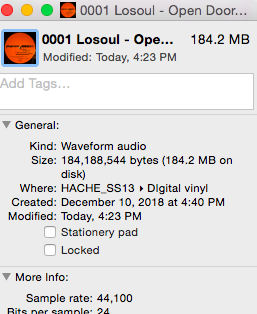 In my case it was an mp4 file. So, i pressed right mouse on the file in Itunes, and selected to Create ACC version. After this, I deleted the mp4 file. Then, I could right mouse, get info, and manually add my artwork.

Here's what I did, since while most of my iTunes albums are recorded as high-quality VBR .mp3's, there are some albums I want to copy as .wav in order to maintain the CD quality while listening through a good sound system.

I go to the last track on the album, right-click on it and select "Create .mp3 version." Once that's done, I right-click on the newly created .mp3 version and add the artwork there as normal. It's now applied to the whole album in iTunes (but will only show up on your iPod or iPhone when playing the single .mp3 file unfortunately.)

Annoying that you have to perform this work-around, but it does at least clean up any missing artwork in iTunes itself. Note you have to keep the spare .mp3 file in the album after adding the artwork, otherwise the apple nazis will once again force removal of the artwork. Sigh.

Not the answer you're looking for? Browse other questions tagged itunes macos music hacking .

5
Can I set custom album artwork that isn't included in one of the songs?
3
How do I get my iTunes “Album Artwork” to add to the individual files instead of “~/Music/iTunes/Album Artwork/”
2
iTunes Album Artwork
3
Any OSX tool to batch remove (or convert) embedded album artwork in MP3 files?
3
Why can't I add artwork to my music in iTunes?
1
Where did “Find Album Artwork” go?