This question is very similar to Is it possible to always show hidden/dotfiles in Open/Save dialogs?. How to show hidden files and folders in finder? is also related. However, I don't want to always show them, and that's what defaults write ... AppleShowAllFiles ... does.

Rather, I want to switch it on when needed. I'm trying to open .bash_profile, so I need it now: 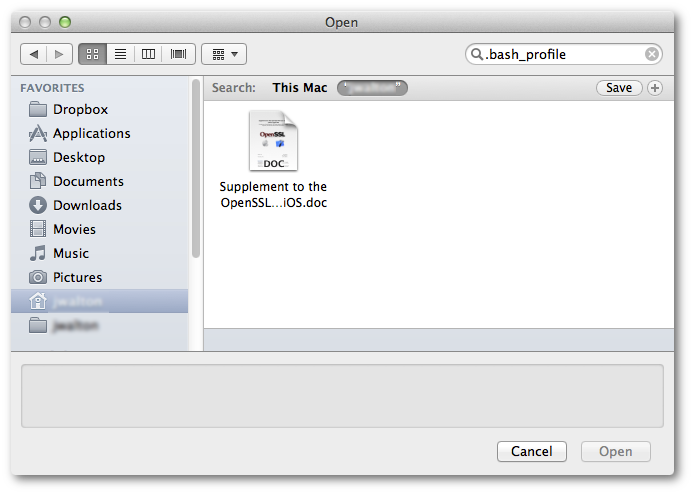 Linux and Gnome allow us to CTRL+H to toggle between showing and hiding hidden files. But Gnome hotkeys don't work on OS X (which is expected).

For completeness, .bash_profile does exist in the home directory:

Why is this hidden away somewhere? What purpose does it serve to not allow a user to easily open a file?

If you are using an AZERTY keyboard, you'll need to press fn too, so ⇧ SHIFT is taken into consideration as you already need it to make the ..

You can also press ⌘ CMD+⇧ SHIFT+G and type the path to the hidden folder, just like in Terminal (⇥ TAB autocompletion also works).

Editing hidden files can be dangerous if you don't know what you're doing.

Mateusz Szlosek covered the first part. Below is how I have handled the second part for my own use.

In my haste to post my answer, I did not realize the second part has already has been answered. See How to set ⌘ + H to enable show hidden files. What I offer below differs by a dialog informing you of the current status.

I created a service using the Automator application. When I want to toggle the viewing of hidden files, I select "Toggle Hidden Files" from the Finder services submenu as shown below. (Hint: Click image for a better view.)

This will cause either pop shown below to appear.

The steps to create the service are give below.

Building off of Mateusz Szlosek's answer, I see the keyboard shortcut ⌘ CMD+⇧ SHIFT+. could be added for my service. Go to System Preferences and click on the Keyboard icon. Select "Services" then "Toggle Hidden Files" under the "General" heading. Replace "none" with the ⌘ CMD+⇧ SHIFT+. keyboard short cut.

Hidden files are hidden for a reason usually. Use the script below only if you're reasonably sure you know what you're doing. In other words: If you break your system by randomly deleting hidden files, it's your own fault.

Here's the script I use to toggle show/don't show hidden files inside Finder.

The difference between my script and others I've seen so far:

Most scripts don't do anything else after killing Finder. Usually, this means you have to navigate back to the folder you were in originally, since the automatic Finder relaunch doesn't reliably open your last active folder.

The script below instead reopens, and focuses on, your last active folder, i.e. the folder you were in when using the toggle, but now showing (or not showing) hidden files.

I assigned a shortcut to it (cmd+shift+.) and find working with hidden files in Finder a lot more convenient now.

Credit to Tetsujin who posted a script on this site a while ago that I adapted to add the 'reopen last folder' functionality.

To use the script: Open a new workflow in Automator, drag in "Run AppleScript", copy&paste the code above, and save inside your services folder (usually, ~/Library/Services/, afaik).

Attaching a shortcut to execute a script should be covered somewhere else on this site. I limited the scope of my shortcut to Finder alone.

I have to resort to a bit of an ugly hack, using 'sleep' after killing Finder, before manually opening the original folder.

If I don't force this delay, there's a chance OSX relaunched Finder already and opened a folder (not necessarily the last active one, in my experience). Together with my own 'open' command, this can lead to the nasty effect of two (unkillable, even) Finder processes running, and Finder not working anymore at all. If this happens, logging out and back in again fixes it, but it's a waste of time obviously, so I use 'sleep'.

A sleep value of 0.5s works for me, but to be on the safe side, you can slightly increase it (adding a more noticeable delay to the process then).

If someone knows of a way to either suppress the Finder relaunch and unreliable opening of some window after sending the killall signal -- or some other way to get rid of the 'sleep' hack -- I'd be happy to hear it!

4
Can I view hidden files and directories from the Open or Save As dialog boxes without making them visible in the Finder?
0
How to attach files using path in osx outlook
72
How to show hidden files and folders in Finder?
50
Is it possible to always show hidden/dotfiles in Open/Save dialogs?
19
I broke my PATH by editing my ~/.bash_profile and Bash will not recognize most commands
10
How to set ⌘ + H to enable show hidden files
1
Mac terminal can't be used after set up of ~/.bash_profile
4
Changing the Finder icon for an external disk formatted as ExFat?
2
Show hidden all files, but hide some
0
How do I access "hidden" .help files
See more linked questions

50
Is it possible to always show hidden/dotfiles in Open/Save dialogs?
68
Display hidden files hot key on Mavericks gone?
4
Hidden Folder not showing in Finder with show all hidden files
23
Save file to hidden directory with standard OS X save dialog
1
In non-native applications, in the Open File dialog, I can see hidden files but I can't select them
5
Search for .bashrc or other dotfiles in Finder
1
How to open/upload hidden files in apps or webapps?
0
macOS Save dialog does not show up for Preview