Apple Watch - Getting weight lifting to count towards “move ring”?

Is there any way to get exercise like weight lifting to count towards the "move ring" of the activity app. I realize it will count a small amount just from moving the wrist around, but some days I would like most of my calorie burn to come from weights and the basic app doesn't seem to cover this.

It doesn't seem like the Move ring can be filled with that sort of activity, though it would be nice. However, I don't do any weight lifting myself, but I do remember that just doing what may have been simplified bicep curls close to my body was able to fill it a little, and actually significantly upped the distance I had gone that day, as though the watch thought I was running.

For the time being, you're right that you'll have to use third party apps. This may help. It offers a few different options. I didn't read very far down, but it looks like you can use either Gymaholic or Fitlist based on personal preference, though Fitlist seems more popular in the thread.

Right now, third party apps won't be able to fill the "Move" ring. However, with the release of watchOS 2 this fall, you may have more luck. Developers will then be able to access health data on the watch, using sensors such as the heart rate monitor, etc., and creating their own haptic buzzes. I'm not positive that this new openness for developers will cover the Activity app, but it might. Time will tell.

There's also this, which again is not guaranteed. You can never quite know with rumors regarding Apple.

I suppose all of this adds up to say that for now, you'll have to use third party apps and their nonnative services, meaning that the Activity app will not be integrated with your weightlifting. But after a bit of waiting, come fall, you'll almost definitely see a whole bunch of native fitness apps pop up in the App Store, with weightlifting apps likely being among them.

Select and run an "Other" workout type. When you're done with the workout, choose "Name Workout" and then select one of the other activity types such as "Strength Training".

Once you've done this, "Strength Training" will appear as a top-level option for your next workout 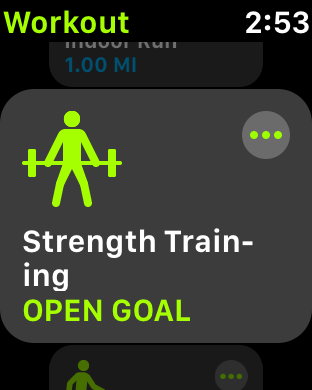 At the end of an Other workout, you can choose a name for your workout from a list of options. This can help categorize different types of activity, like dance, strength training, or cross training.

pkambpkamb
4,39844 gold badges3434 silver badges6161 bronze badges
Add a comment  |
-1
Want to improve this post? Provide detailed answers to this question, including citations and an explanation of why your answer is correct. Answers without enough detail may be edited or deleted.

I set the workout to other when lifting. It's something

Not the answer you're looking for? Browse other questions tagged apple-watch activity.app .

8
What are “Active Calories”?