Yesterday, I decided to go ahead and subscribe to iTunes Match. One of the first CDs I imported after having activated iTunes Match was a really old compilation CD, with various tracks from various artists.

Some of the songs were matched with songs in the iTunes Store (correct songs, but a different compilation album from the one I was importing), whereas most of them were just uploaded. In iTunes in OS X the album displays correctly, grouped together as the album I uploaded and with the album art that iTunes found for me. However, on my iOS device, all of the uploaded songs are grouped together, whereas the matched songs are displayed as separate albums, with the album art from the albums to which they were matched - albeit with the same album name as my uploaded tracks.

How it looks in iTunes:

How it looks on iOS: 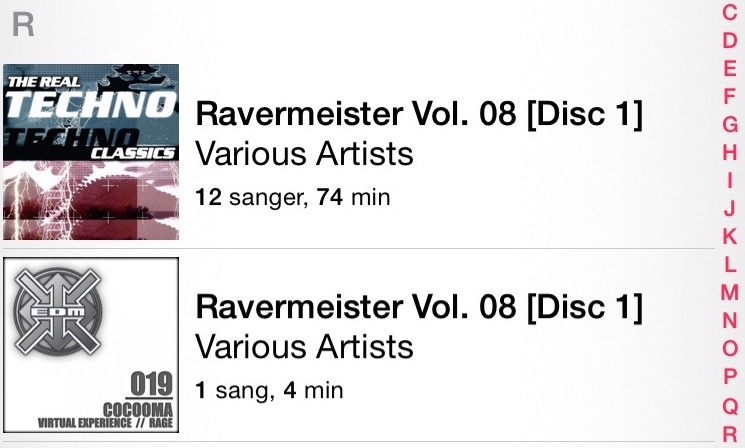 Has anybody got any ideas about how to fix this?

The answer is here, there's error in iTunes Match since 27th of April.

Not the answer you're looking for? Browse other questions tagged itunes itunes-match .

18
How do I force iTunes Match to re-evaluate certain tracks
7
Why does iTunes Match match only some songs from the same album?
2
iCloud Why Are Some Album Tracks Uploaded Instead of Matched
7
How to make sure album art shows up everywhere (Mac & iPhone) while using iTunes Match?
1
How do I retrieve stats about my iTunes Match account?
1
What does iTunes Match think a specific track is?
11
How do I mark songs as Explicit in iTunes to make them match correctly in iTunes Match
3
How can I get iTunes 11.1 to list songs by album and show cover art
5
iOS Album-Art Mismatch Post Sync