Is the latest MacBook Pro 13 able to play such videos smoothly?

I'm under the assumption that you may have stumbled across reports such as this one in a casual Google search. I quote:

Subsequent refresh rate tests confirmed that it was running at 60Hz, and the publication said that interface components were "more than smooth enough for desktop use." Problems cropped up when performing animation-intensive actions, like entering full-screen mode, with "clearly visible" frame lag, showing that the display pushes the Intel HD 6000 graphics chip near its limit.

Notice that the first emboldened snippet says that you have to switch the user interface. This likely means usage of 3rd-pary software, such as SwitchResX, to enable changing system setting and entering this configuration. This is not recommended. Changing the resolution settings to something that cannot be enabled via System Settings can cause problems. Trying to push your hardware over the limits set by Apple can cause the system to overheat and consequently be damaged. Your MacBook is not ventilated very well and you have an integrated GPU which relies in part on the CPU. The additional overhead will cause complications.

I've read that full 4k at 60 fps is supported over DisplayPort. – Šime Vidas 3 hours ago

Refresh rates in the article above confirmed 60Hz. Is it able to play videos at 60Hz? The answer is likely yes. It is officially supported? No, their support page shows a limit of 30Hz at the resolution you stated.

Is the latest MacBook Pro 13 able to play such videos smoothly?

Objectively speaking, yes, it is able to.

Will the system play it at 60Hz on a 4k 60Hz monitor? No, it will not. It does not natively support it.

Also see DisplayPort 1.3 and Thunderbolt 2 on Wikipedia for sources and more detailed info.

In my experience: No, it is not capable of decoding YouTube 4K/60fps videos without dropping frames.

Yes my Macbook pro 13" Early-2015 can play 4k Youtube video smoothly on Dell P2715Q but must be via Safari, but not Chrome

I don't know what fps is played, but I will put the stat for nerds here. If you know please tell me 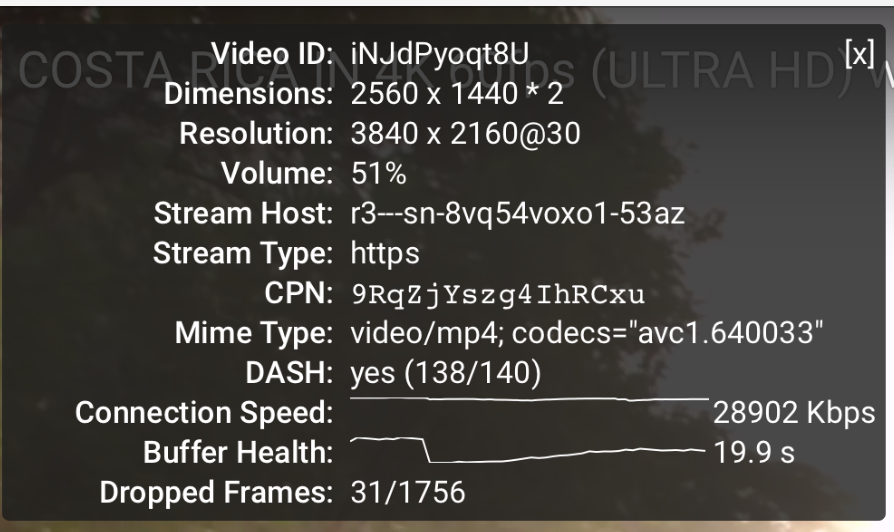 3
How do I import an MP4 video created using the GoPro Hero Camera into the iPad?
1
Streaming high quality videos without loss of quality?
1
Youtube doesnt play on a specific connection on Macbook Air
0
Use iPad as output device without iTunes?
2
VLC is dropping frames/stuttering when trying to play 1080p@60FPS video on rMBP w. 2.3 GHz Intel Core i7
8
Can I charge my MacBook Pro 2015 without using MagSafe 2 power port?
3
How can I prevent jittery video playback on High Sierra?
3
YouTube freezes with Safari
0
Possible reasons for very laggy video on external 4K monitor from MacBook Pro (Retina, 15-inch, Late 2013)?