How do I clear All OS X notifications with 1 click?

macos notifications
Share
Improve this question
edited May 4, 2015 at 8:24 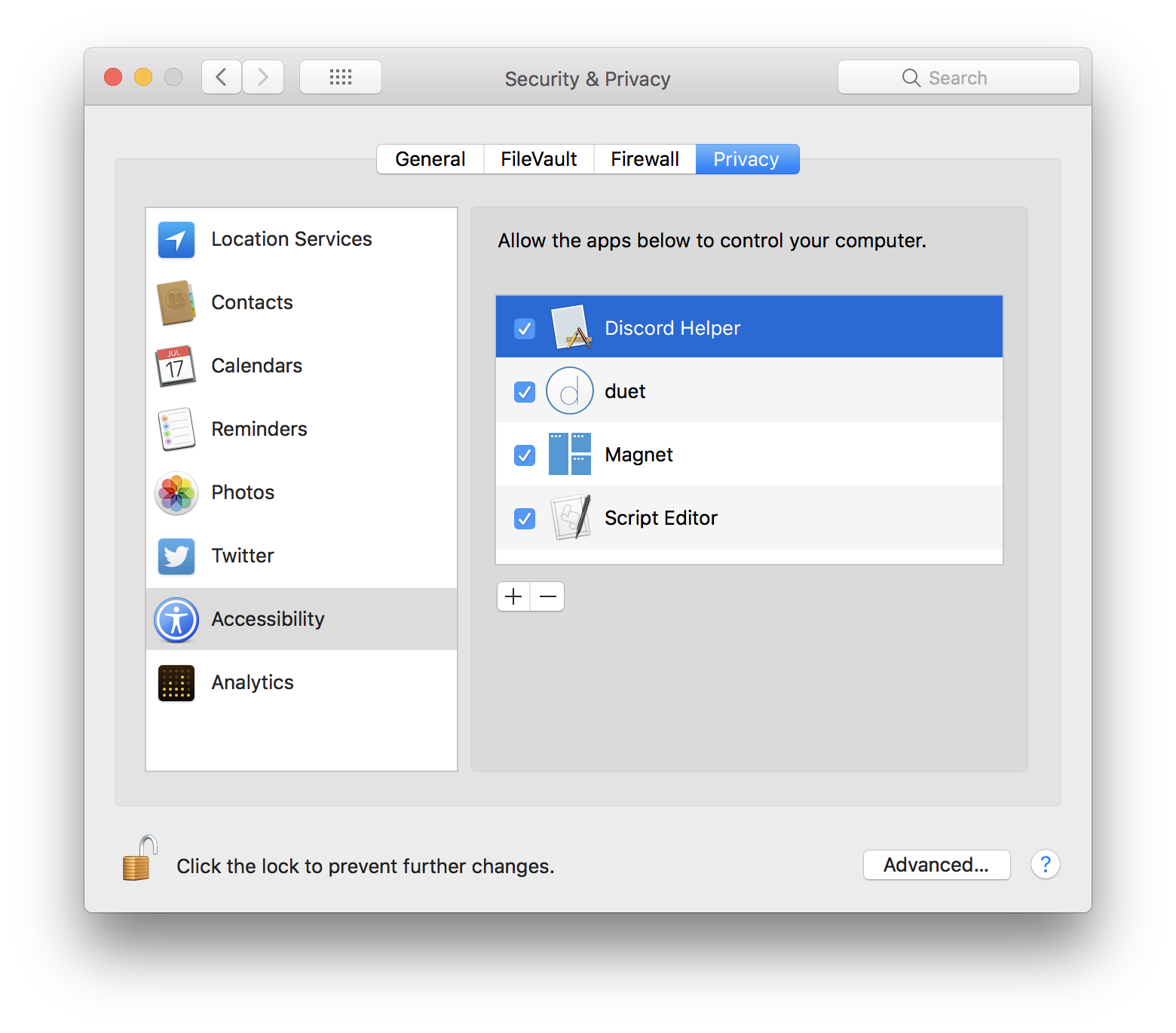 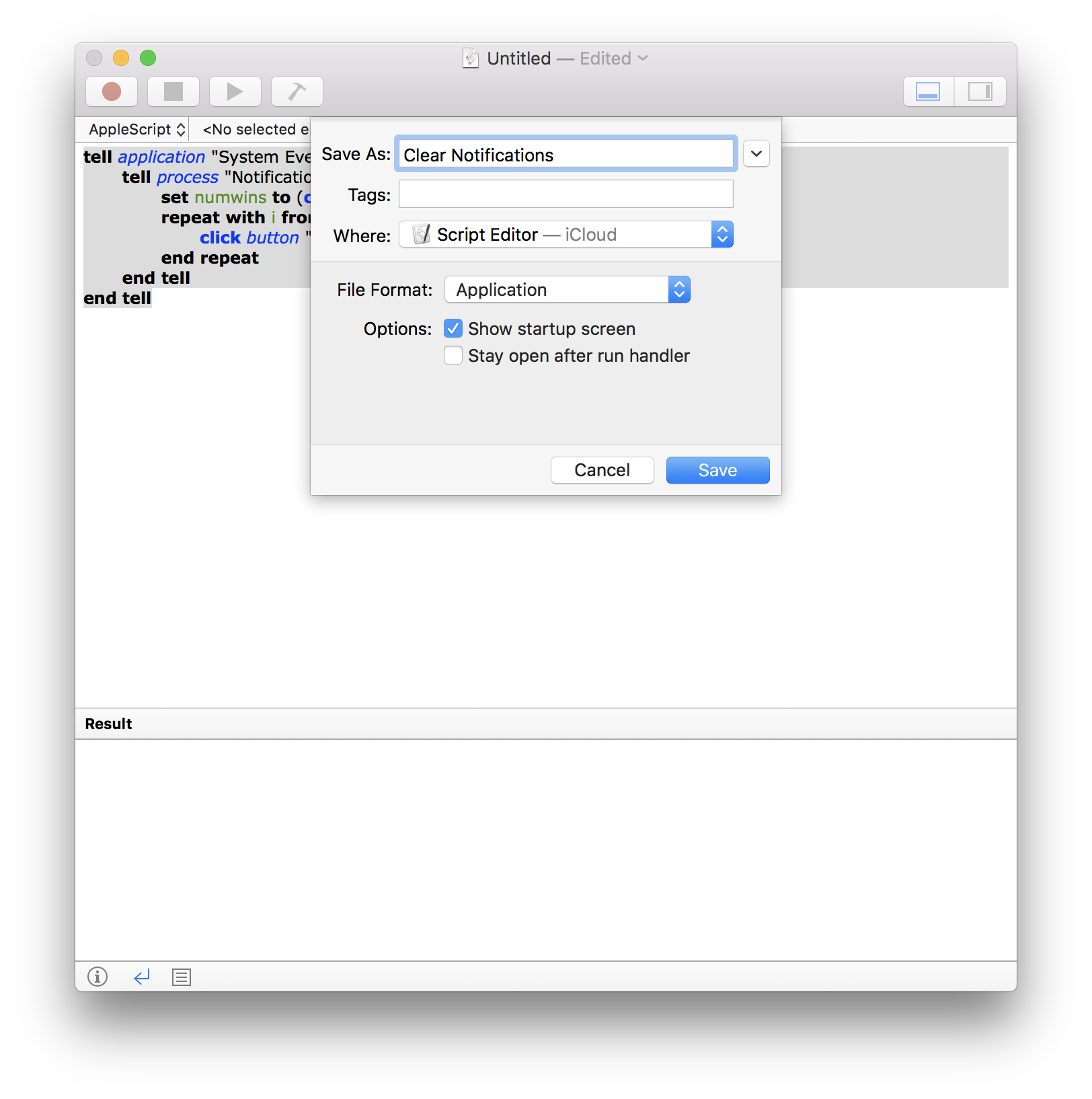 Another option, which uses Keyboard Maestro to run an Applescript is detailed here: http://genuinecuriosity.com/unnotify

I have it mapped so that I hit Command Option 0 to clear all open alert dialogs.

Basically, I have created an Applescript to click the first button on all open alerts (typically Close), and does that until all alerts are cleared. You can use the Applescript directly through Keyboard Maestro (as described in my article), or you can create a Service with Automator (this is a little more finicky due to Accessibility permissions requirements).

The full Applescript is included in the article, along with a screen grab showing the setup in Keyboard Maestro. 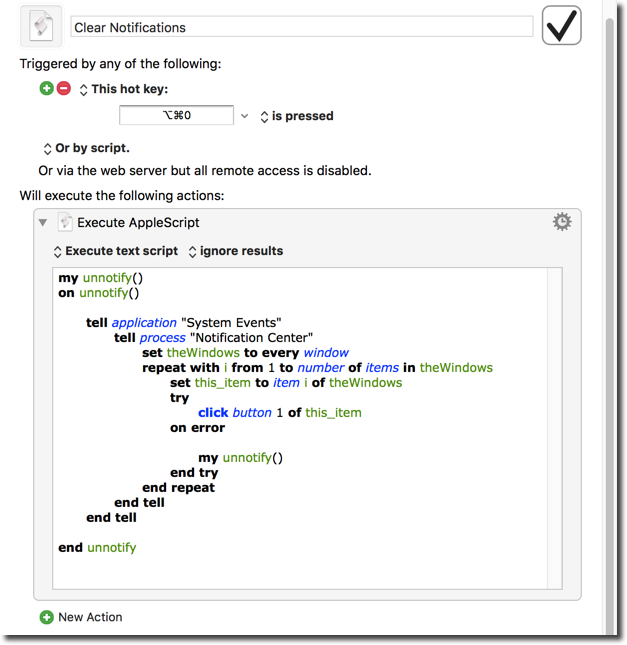 I know this was originally for Yosemite, and I'm not sure the answer there, but given the question is 3 years old, and I just found it while looking for the same thing with Mojave, I thought I'd mention the answer I found. 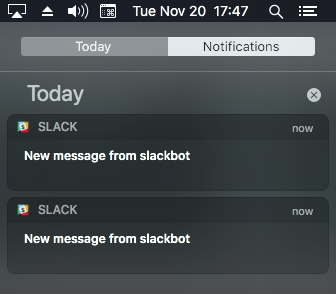 on the very right of the menu bar, click on the 3 lines, this brings up a window with Today / Notifications tabs. If you select the Notifications tab, you can click the X to the right of Today to clear all the notifications for a given day. a few clicks and you'll have all the old ones cleared.

I don't know a way to clear every notification with a single button, however you can clear all of one app's notifications by moving your mouse to the right of the app's header and clicking the small x button that appears there.

To clear them all, I simply move the mouse to the topmost app's x button and rapidly click which removes all of the notifications relatively quickly.

I ended up creating an Automator script to do this and mapping it to a global hotkey.

Here's solution that requires the Terminal, but it works with Big Sur. This is useful in particular if you have dozens of notifications from the Finder that can't be quickly closed using other approaches.

This is similar to Joey's answer, except it does it all in one command. ps -e gets a list of running processes. The grep filters the list to those containing /NotificationCenter. This list still has too many items because the grep command itself ends up finding itself. We exclude it by running another grep on the output of that list. The awk command prints the first column, which is the process id that we need to restart. Xargs takes the output of the previous command and feeds it to its arguments, namely, "kill -9" which is the unix command to exit a process.

The practical outcome is that the NotificationCenter.app is stopped. Launchd (the system process that launches other system processes) notices that Notification Center went away, and reinitiates it. When it comes back, all the messages in its queue are lost and your notifications are cleared.

Once installed, you can just open the notification center, then click "Clear" on the bottom.

Just go into the activity monitor and force quit the notification center...

Alt-click usually works to perform one operation on multiple things.

Change the annoying notification app in the notifications preferences, from "alerts" to "banners". Banners are automatically dismissed after few seconds.

Not the answer you're looking for? Browse other questions tagged macos notifications .