I swear when I first installed windows on a partition of my Mac HD my computer would restart in the last operating system used. By that I mean that if I hit restart whilst in Windows, my computer would restart and boot up Windows and likewise for OS X. Ever since I was messing around with my system preferences and selected a startup disc, I now have to pick weather I want it to always restart in OS X or always in Windows. How do I get it back to the way it was (or was it never that way)? Thanks.

The answer is it was never worked that way. If you want it to work that way, you have to install a boot manager. The most common free one is call rEFInd. Most people install this software in the OS X partition, but this can lead to problems when you install updates. I installed rEFInd in its own partition to avoid such problems.

I would go with @ryebread's answer and just use either "Startup Disk" on OS X System Preferences or "Boot Camp" menu on Windows Control Panel. An example of this is shown below. Here, Windows is set as startup. 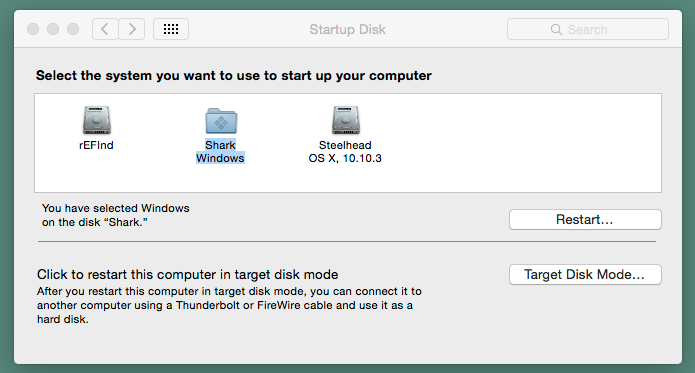 If I want to switch to OS X, then I need to click on the OS X icon to highlight it. This is shown below. 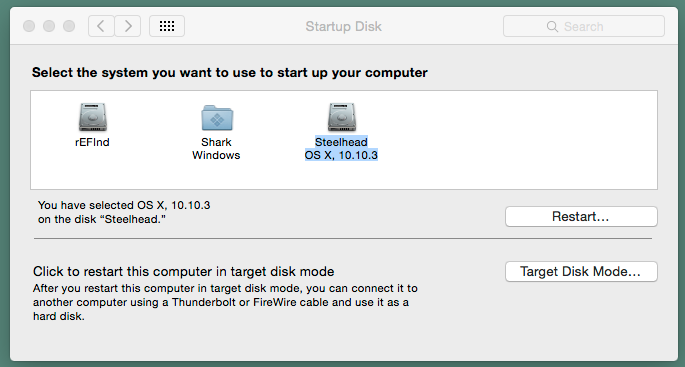 I am now set to boot to OS X. There is no need to do a Restart. I can just close the window.

(Actually in practice, you will probably end up selecting the Restart button.)

If you want to boot from OS X to Windows while leaving OS X as the default, then you would need to enter the bless command from a Terminal application window. Or, you can create a script launched as a Service via the Automator application. An example script is given here.

After some testing, I found if no system is highlighted in the Startup Disk window, then the computer always boots to OS X. I am not sure what your computer was doing originally. I think what you want is for the computer to always boot to the last operating system that ran. If this is true, then rEFInd is probably the best way to go. On my computer, rEFInd only occupies 6 MB of space. If you need help installing, let me know.

BTW, I removed the highlighting by blessing a flash drive.

Firstly, if you hold down the Option key just after the boot chime, you can get to a "boot menu" where you can select the drive that you want to boot from. It will look something like this: 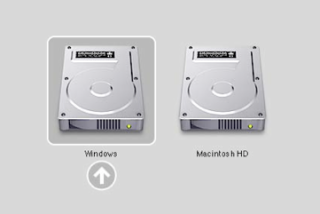 Secondly, selecting your boot drive in System Preferences does exactly what you are describing. You select Windows, and then it boots to Windows. When you restart, you come back to Windows. When you switch to boot from OS X in the boot selector from within Windows, then you will boot into OS X until told to boot to Windows.

AFAIK, if you switch the boot drive from the Option boot menu, that is a temporary change, and the next reboot will be whatever is selected in System Preferences. I don't have a dual-boot machine here to test that theory, unfortunately. However, since that boot menu can be used to boot onto optical media as well, it would make sense that it is a temporary change.

Not the answer you're looking for? Browse other questions tagged macos bootcamp windows restart .

-1
AppleScript for restarting to Bootcamp?