Is it bad to store a mac on top of a windows laptop due to the magnetic power cord?

I have a Windows Laptop and a MacBook and I like to keep them both in the same place. Is it bad to stack them on top of each other?

This has been asked a couple different times (as in What computer components are currently vulnerable to magnets?), but with nothing explicitly addressing the close proximity of a non-magnetically placed power source right next to a mac. 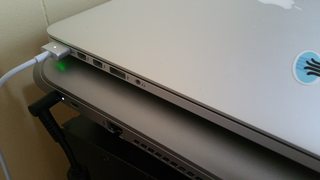 Unless the laptop comes from the mid-1980s and has the floppy drive directly below the magnet, no.

The components most affected my magnetic fields are the hard disk drive and the CRT display. Laptops haven't had CRT displays for quite a while now, and are largely losing their magnetic storage. If you do have a spinning drive instead of a SSD, the current ones are far less sensitive to external magnetic fields than they used to be: increased capacity -> less sensitivity.

So unless you have a massively-powerful rare-earth or electromagnet on the shelf, don't worry about it. The tiny magnet in the power connector won't even be noticed.

Not the answer you're looking for? Browse other questions tagged macbook-pro maintenance .

142
Should I disconnect my MacBook Pro's power cord when the battery is fully charged?
1
Get MacBook to say Thank You when plugging in the power cord?
3
MacBook Pro running slow, freezing?
1
Do Apple products have different networking / wifi standards?
0
Macbook Pro screen keeps randomly going black after login, weird issues
1
When does a mac laptop startup automatically after a power failure?
1
Does a power cord use energy when it is not pugged into a Mac?
0
Can I make my Mac re-adjust to the original brightness when I plug my power cord back in?