Why am I so short on physical memory?

My computer is getting old (almost 6 years old I think) and is becoming increasingly slow. The past few week were pretty bad and I am now realizing that my computer is continuously short on physical memory. Here is a screenshot of the memory activity showing that 3.98GB out of my 4GB of physical memory are used. 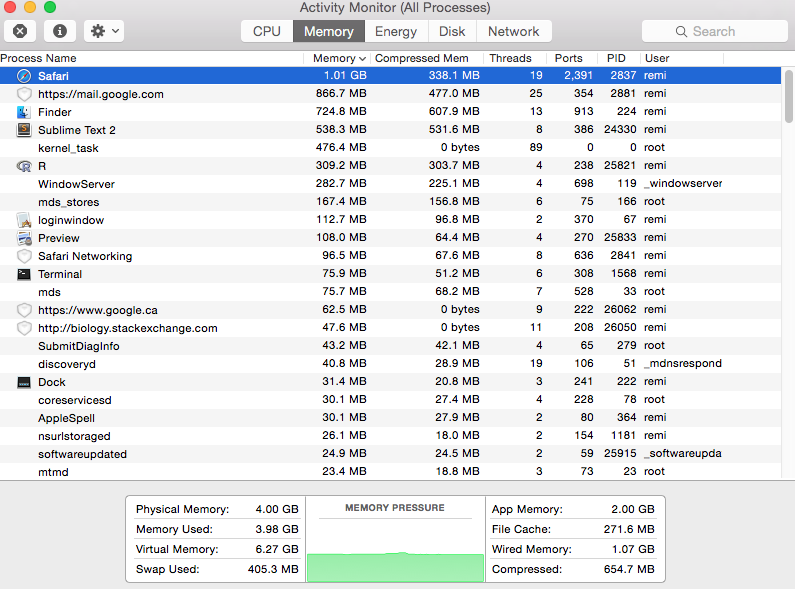 This screenshot was taken while I was using my computer as I usually do, not very intensively. I had 2 Safari windows open (gmail and StackExchange), I had two .txt files of about 10kb each opened with Sublime Text 2 and had the R (programming language) console opened but nothing really heavy was running and no particularly big objects were stored. I had 4 terminal (Bash) windows open to manipulate files and some ssh connections but nothing was running at the moment of the screenshot. I also had a 328kb pdf was open in Preview.

Are those applications taking too much memory? If yes, how can I solve this issue? Am I just overestimating the capacities of my computer (but I felt like I didn't such issues before)?

FYI: My machine is a MacBook Pro running on OSX Yosemite (10.10.2) and here are some other screenshot in case it helps! 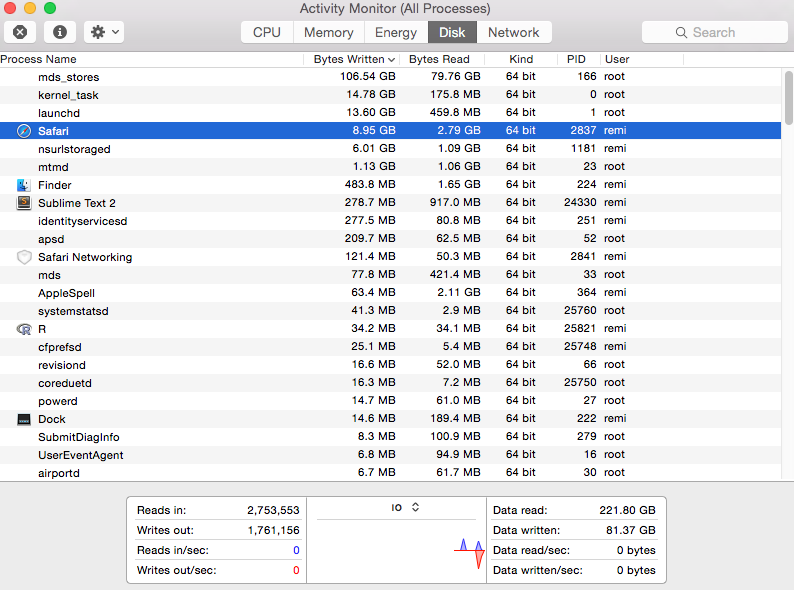 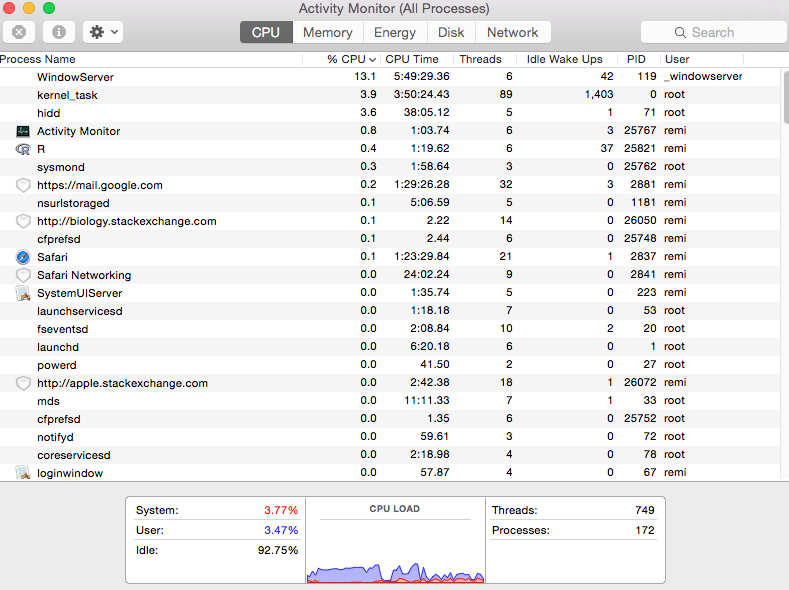 Your memory and CPU usage are normal. And you don't appear to have anything massive running.

Modern computers utilize as much memory as possible before swapping anything out to the (much slower) disk. If you have more than 1-2 programs open you should expect to see the memory mostly full. The OS will handle swapping / clearing it as needed.

My computer is getting old (almost 6 years old I think) and is becoming increasingly slow.

Computers do not slow down with age. But they do accumulate stuff. How full is your disk drive? If you have less than 20Gb or 15% free space your disk will take a lot longer to return results.

Or your disk is having issues. Either way, installing an SSD is a simple and cheap way to get a huge performance boost out of an older machine. The drives cost under $200 now, changing one takes 15 minutes but on a macbook Pro will require some special screwdrivers.

Apple computers (As well as a few PC's) use hard drive space as RAM if they need to. If your hard drive is packed, it will effect your RAM as well.

SSD will definitely speed up your mac but it will shrink the amount of hard drive space you have (most likely, depends how much you spend). I would first try cleaning out anything you don't need from your hard drive first.

Not the answer you're looking for? Browse other questions tagged macos memory web-browsing .

8
Trouble Understanding Inactive Memory in MacOSX
2
Why can I browse with Firefox but not with Safari or Chrome?
6
Disable inactive memory swapping
2
eapolclient process using 30GB of memory?
2
How to hunt down which tab or webpage (on Google Chrome) used a lot of memory?
1
Why did my 2017 12” MB go into kernel panic (page fault)?