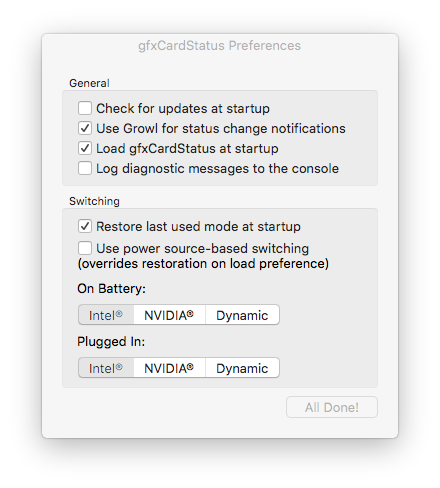 23
Constant kernel GPU panics (GPUPanic.cpp:127) on mid-2010 MacBook Pro (6,2)
1
Will forcing integrated GPU mode prevent GPU panics? If so, how to do that?
1
MBP GPU Panic-less Logic Boards
1
Do All of the Macbook Pros Have That GPU-Kernel Panic Issue?
1
Mid-2010s Kernel Panic GPU - best options?

2
What parts can you scavenge from a nearly 3 year old MacBook Pro?
1
Downgrading from OS X Mountain Lion to Snow Leopard gets stuck at Apple logo
0
MacBook Pro (13-inch, Mid 2010) won't go to sleep, nor will it wake up from sleep
2
OS X upgrade on MacBook Pro mid 2010 trilemma
0
Is there any way to expedite a MBP 2011 discrete GPU failure
1
Do All of the Macbook Pros Have That GPU-Kernel Panic Issue?
1
MBP GPU Panic-less Logic Boards