Do Macs run the full Windows OS making full use of Windows functionality?

So I now know that Macs can run Windows, but I just want to confirm if it runs Windows like a normal Windows would run on a PC, with full functionality. In other words, just like you get an HP-Laptop with Windows in it as the operating system, is it the same thing with installing Windows on a Mac? I just want to be sure that they are one and the same, and not just some emulator with restrictions.

There are basically two ways you can run Windows on a Mac.

You can run Windows in an emulator like VirtualBox, Parallels or VMWare. You get the entire functionality of Windows, but it is running within a VM on another operating system so you don't get the entire performance of the Mac as the resources are shared between Windows and OS X.

Macs have made some of the best PC's in the last 5 years.

The 2015 article by PC Magazine ranks only two computers higher than 4.0 out of 5.0 round dots.

See http://www.pcmag.com/article2/0,2817,2369981,00.asp for the full roundup and reviews. Also, if you drop the one Intel Celeron N2840 powered unit, Apple's laptops have the two longest battery run time of the 10 editors picks when running Windows OS despite being last year's models.

Due to low reputation, I cannot comment to David's response. I wanted to add how you "bless" a boot partition without using the Terminal.

I think what you are asking is:

I have never tried to do this, but I accidentally installed Fedora 21 workstation 32 bit mode this way from a live DVD. The machine was iMac7,1 (iMac 21 inch Mid 2007).

If it worked for Fedora, I don't see why it wouldn't work for Windows.

Here Is an Update to my Answer

I took an old iMac4,1 and booted from a Windows 7 SP1 32bit install DVD. I deleted all partitions and created a single NTFS partition. The install proceeded normally, just like a PC. After installing, I removed the DVD and did a few reboots. Each time, a question mark momentarily appeared in the center of the screen, then the Mac booted to Windows 7. My guess is the firmware was looking for an OS X and when absent, settled for a Windows BIOS boot.

For this model, the Boot Camp drivers for Windows Vista are stored on the Apple OS X 10.6 Snow Leopard install DVD. I inserted the DVD and Windows automatically asked to run Setup.exe. I let setup proceed and the Boot Camp drivers installed. Upon successful completion, I was prompt for a reboot. The reboot proceeded with the DVD still in the optical drive.

This time the Mac booted to the DVD and starting the OS X install process. I proceeded to answer a few question and eventually reached the point were a could open a Terminal window. I ran the commands distutil list /dev/disk0 and fdisk /dev/disk0. The results confirmed the disk had only a MBR partition scheme with a single NTFS partition on /dev/disk0s1. At this point, it occurred to me to enter the command bless --device /dev/disk0s1 --setBoot --legacy. After doing so, I quit the Terminal application and canceled the OS X install. (Actually, the installer never reached the point where it ask were to install. Therefore, no part of OS X was ever installed.)

This reboot resulted in a direct boot to Windows 7. The DVD was ignored and there was no question mark. After removing the DVD, I did a few more reboots. The question mark never appeared. My Mac is a PC.

I should point out a two things.

First, for most iMacs, the Boot Camps drivers can be directly downloaded from the web. See the link "System requirements to install Windows on your Mac via Boot Camp". One should also make sure their iMac firmware is up to date by visiting the link "EFI and SMC firmware updates for Intel-based Macs".

Second, there is an alternative to entering the bless command from a OS X Terminal window. Once the Boot Camp drivers are installed, a Boot Camp icon will appear on the Windows Control Panel. (Hint: Open image show below in a new windows for a better view.) 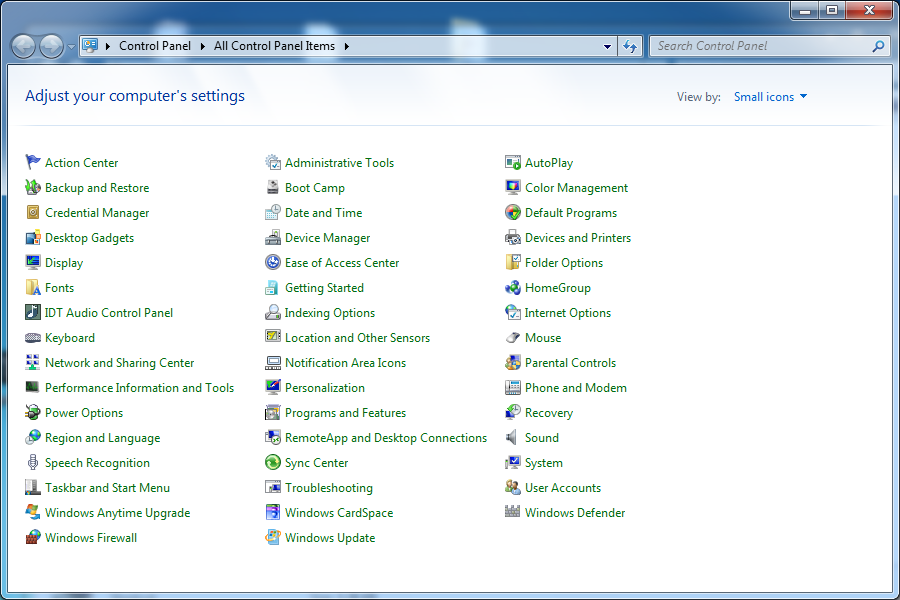 Clicking on this icon will open the Boot Camp Control Panel shown below. 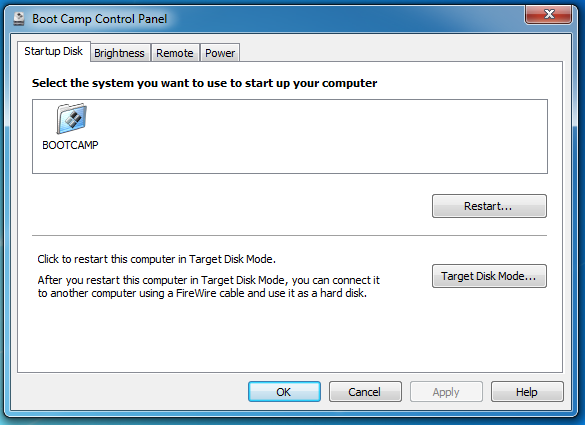 Click on the Windows folder icon (labeled here as BOOTCAMP) to highlight it. 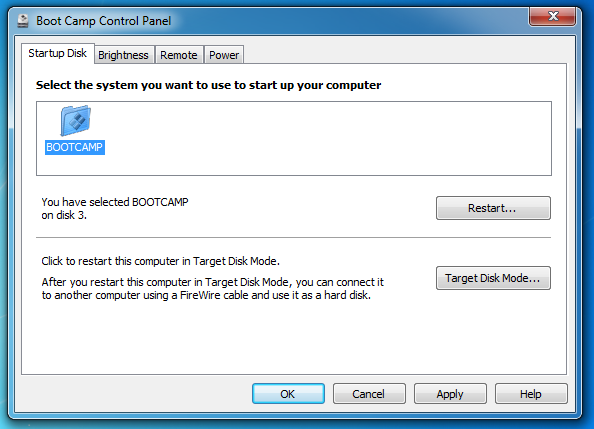 Close both windows. (A restart is not required.) You now have blessed the Windows partition and the question mark should not appear on startup.

Not the answer you're looking for? Browse other questions tagged macos macbook-pro bootcamp windows .

1
Does Windows 2008 Server run acceptably on a Mac Mini with Bootcamp?
13
Windows-style taskbar functionality in OS X?
0
Games on windows 8 in bootcamp lag even on lowest graphics
0
How to keep MacBooks keyboard and trackpad functionality when using Windows on Bootcamp?
5
Same dedicated Windows drive for Boot Camp and VirtualBox?
4
How does Windows 10 run on a Mac that officially only supports Windows 7?
0
Windows 10 on MacBook Air
1
Possible to use the same ssd for a Windows and a Mac laptop via different partitions?
1
Can I run windows 10 on my MacBook Air via bootcamp without paying for a windows license?
1
I want to install Windows 10 on External SSD and then be able to move it between 2 Macs, is that possible?