Can I remove one song from my iTunes account so that it doesn't appear on my iPhone without disabling Show All?

Muse made their upcoming album Drones available for preorder at the same time that they made one of its tracks, Psycho, available for purchase so, instantly, I bought Psycho from iTunes and, later on, preordered the Deluxe Edition of Drones from muse.mu. I then found out that the Deluxe Edition of Drones comes with digital downloads of any singles that have been or will be released which I initially ignored as I already owned Psycho but I later realised that the MP3 file had a much higher bitrate than the iTunes file. So, I deleted the iTunes file but, when I play Drones on repeat. Psycho plays twice because iTunes is streaming the track attached to my account and then playing the local, as you can see here: 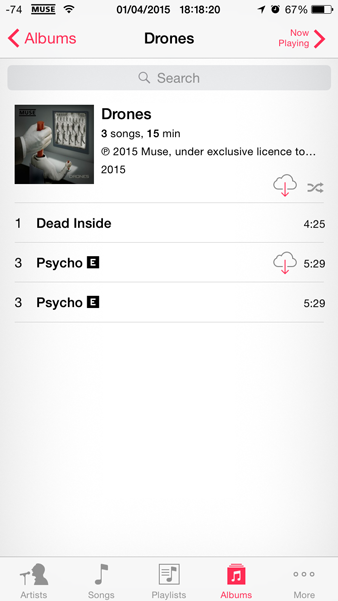 The song you bought from iTunes Store is not yet downloaded into your iPhone, but will be streamed from iTunes while playing.

There is no option to cancel the purchase and remove the song - from your iPhone. But you can do that from iTunes, from your PC or Mac. Please refer to this to find more about how this request can be made.

2
iTunes to iPhone cannot sync parts of the iTunes music library
0
How do I copy mp3s and then edit the ID3 tags of the copies without altering the tags on the originals?
1
Where are iTunes music files located, if they are not in Music/iTunes/iTunes Media?
0
How to remove song from itunes
0
How to pull ID3 tags from online database(s) for specific albums?
1
Transfer private MP3 files from my PC to my iPhone SE 2020