What tiny thing in Lion makes you smile or has caught you off guard?

I would like to call for a place to list some little things that surprise you about Lion. There are so many articles and lists of all the new features with information overload, I would rather focus this spot of the site on tiny delights with a note why it makes a difference to you.

Please one topic per answer, this isn't a race to enumerate everything that changed. This isn't the place for massive topics like the implications of FileVault 2 on your entire workflow - just a stroll past some little gems, fun oddities or subtle changes specific to Lion.

Answers must relate to why or how you use the feature - links to official tips and tutorials are great, but the intent is to collect little gems that affect how the system gets used. Expect answers that are not specific to lion or lack a personal use case to be heavily edited or deleted.

Incremental backup with FileVault and TimeMachine

Your data gets backed up whether you are logged in or not and the speed of the backups is much improved over Snow Leopard.

With the new FileVault, they just work nicely together - incremental, background, unnoticed and up-to-date.

The new text to speech voices included in Lion (or downloadable, post-install) are now no longer US English only - but with many diverse variants of English, and select other foreign languages - e.g. Swedish.

This is helpful for learning foreign languages, in combination with the "say" command, for example.

High-quality voices In addition to the built-in voices in Lion, you can download higher-quality versions of the languages from VoiceOver Utility. Choose Customize from the Voice pop-up menu in the Speech pane.

The ability to have different desktop backgrounds in different spaces. Set the background, add a space, then set a new background in that space. Not sure if it is a bug or a feature, because it doesn't specify that it is for that space only. When you change it, it changes your default, but not backgrounds on existing spaces. 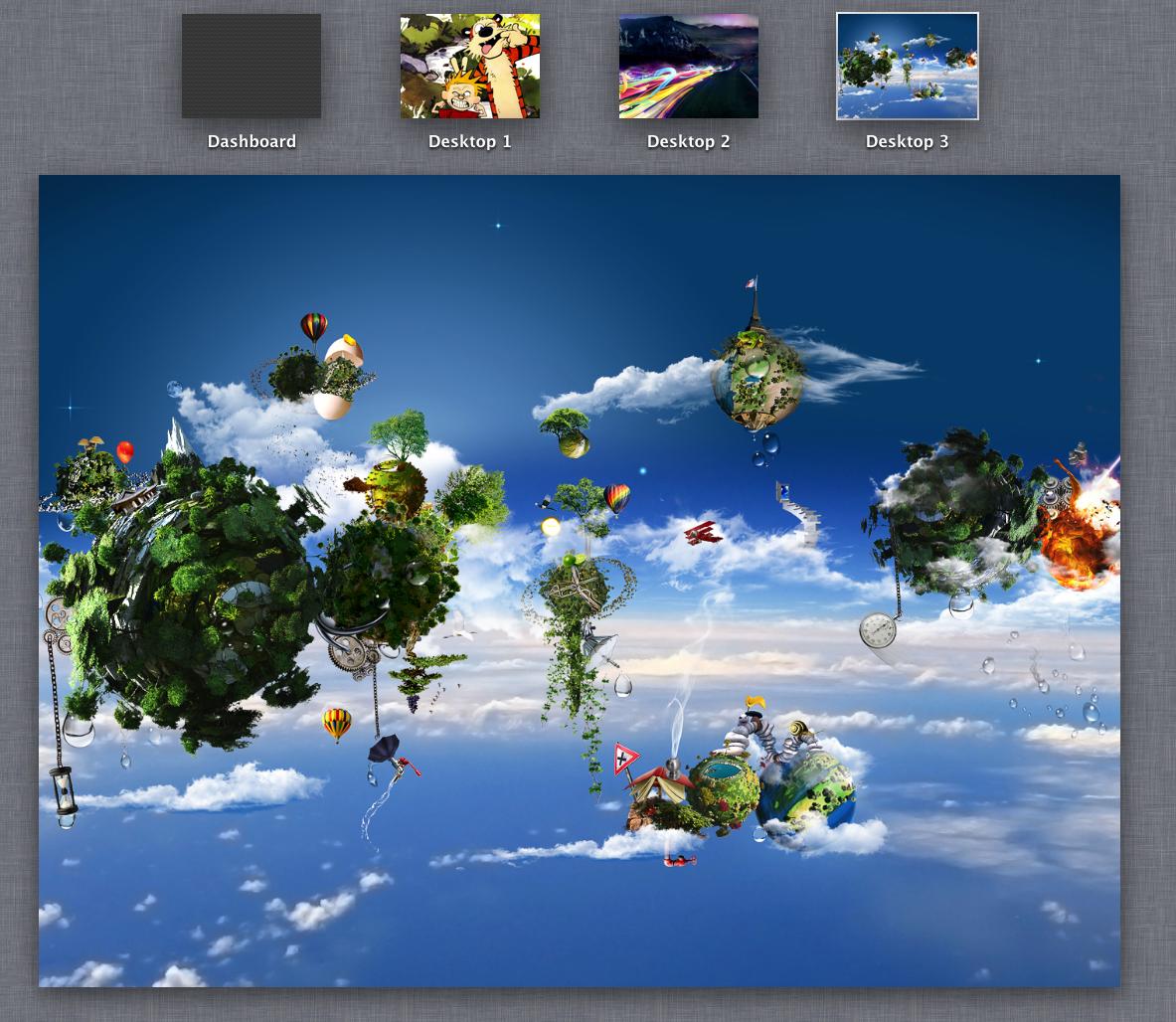 Autocorrect services from the system

I am happy to see that one of the most helpful-yet-annoying features of iOS has made it into Lion - Autocorrect. Seeing the little pop-up with the suggestion and then seeing my spelling error automatically corrected made me smile. (I'll have to play with it a bit more to figure out exactly how to see other suggestions and cancel an incorrect one, but this is a great feature in the right context.)

Spell check service is aware of a document's language

The spell checker auto detects what language you're writing it and switches to the correct dictionary!

Photo Booth now has an option to disable screen flash

Before you could suppress the screen flash by holding Shift but I don't recall there being a persistent option. For those of us with glasses who are sick of taking pictures that look like we're witnessing nuclear weapons testing, this is a welcome feature.

Upon having the thought to organize some documents, the workflow is much accelerated. Simply select the items, activate the service to make a new folder and then rename the new folder.

This is so much better than the old, interrupt your thought to make a new folder, find it (if you sort by name), rename it, go back and select the files, and drag it to the new folder.

Pressing F1 or F2 keys on an external keyboard will brighten or dim the display.

Previously those keys does nothing. This was very un-handy having to reach up to the laptop keyboard to dim its screen.

Automator can send a URL to Quick Look rather than a browser.

With automator, you can now make a website open as a web app. You just have to make Automator open a URL as a “Website Popup”. Very nice unadvertised feature.

Andy Ihnatko explains it well - you can make a minimalistic desktop web app with ease.

This caught me off guard, but it did not make me smile: 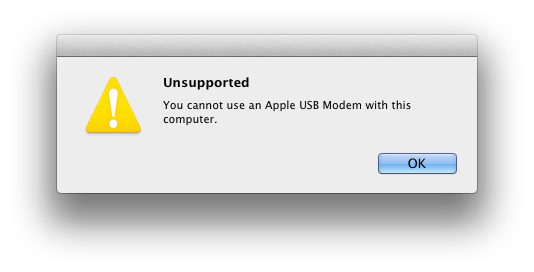 The icon in System Preferences has also been renamed from "Print & Fax" to "Print & Scan".

Wi-Fi Diagnostics are pretty and useful 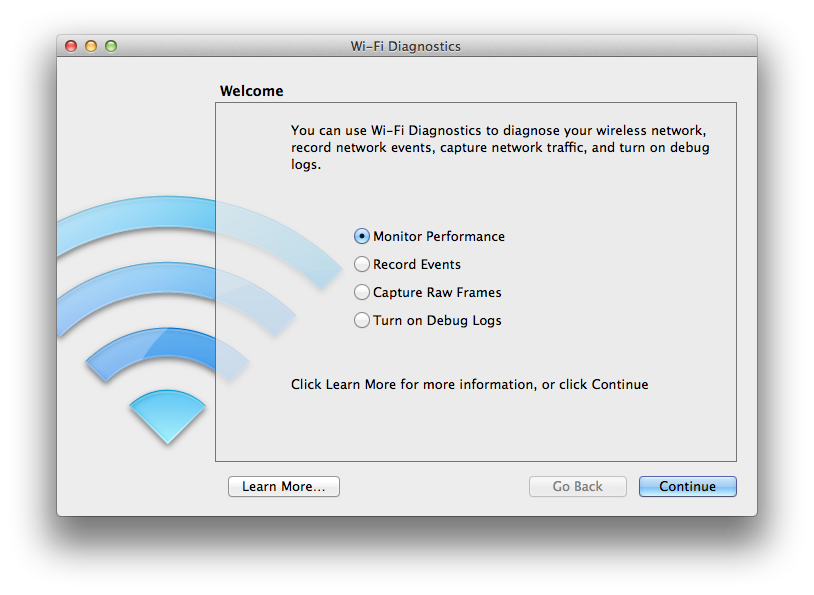 It's very good for monitoring and testing wireless networks.

If you prefer to not show Wi-Fi status in the menu bar, then to find the app:

While Mission Control is open, press ⌘+M to enable a motion blur effect.

To disable it, press ⌘+M again.

You can test this yourself by running the “Colortest: xterm 256 color test and visual colors list” script. 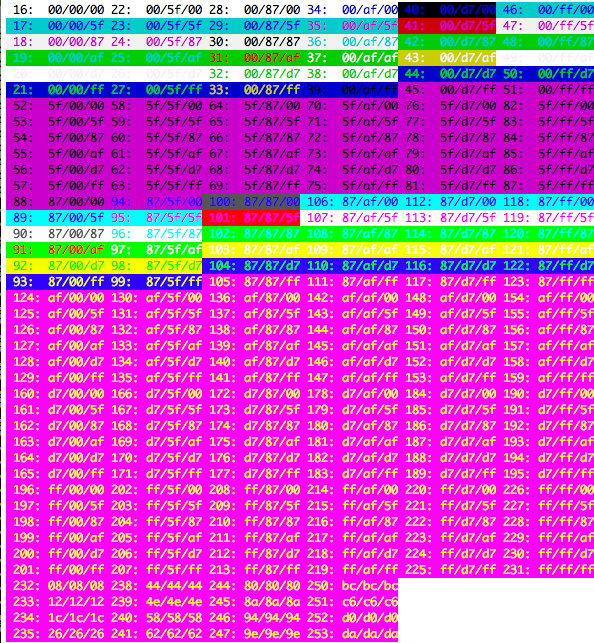 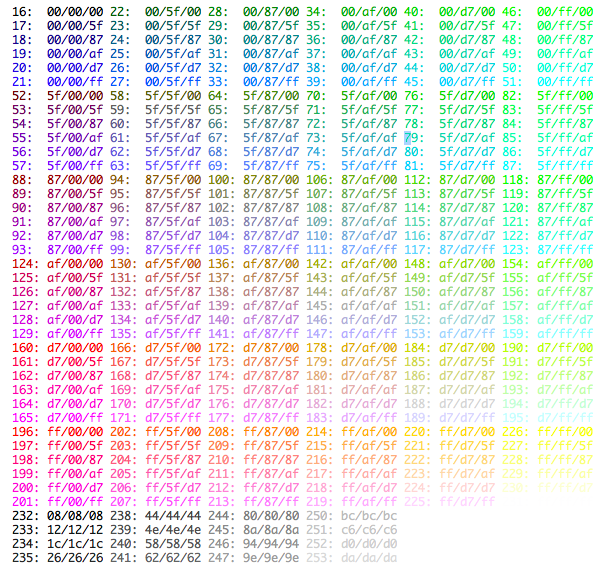 Being able to change the Launchpad background effect with Control + Option + Command + B in 10.7.3 and 10.8, or ⌘ + B, is pretty cool. You can make any Desktop Wallpaper black and white, blurred, sharp, color, or any combination of those. It only is capable of using your current desktop's wallpaper however, unless any of you know how to specify a different wallpaper just for Launchpad. It's really a nice customization option!

We use Microsoft Distributed File System (DFS) at work and for years mounting Windows shares has always been a headache because of DFS. With Lion, DFS works like a charm, no more 50 individual mounts now its just smb://server/dfsroot

Calculate all sizes in Finder is ridiculously fast now

It runs now like butter on a hot skillet.

I use an old Mac Mini in my bedroom as a media center, and have used OS X's built-in Internet Sharing to make it act as a wireless access point and share the ethernet connection.

Up to Snow Leopard, it only supported sharing on the 2.4Ghz frequency, which in my neighborhood is so congested as to be nearly useless. But in Lion there are four 5Ghz frequencies available to share on.

Now if they'd only allow better wireless security than WEP-128, it'd be perfect!

When in Mission Control, you can invoke Quicklook on a certain window that your cursor hovers by pressing space. 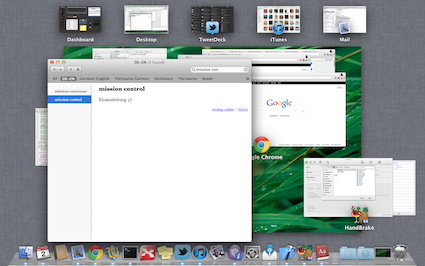 I have to manage Macs at work, and it has always been a challenge to have an acceptable use login banner for people to agree to before logging in. Either editing .plist files, or downloading 3rd-party software was required. However, now Lion lets you put a text or rich-text file in /Library/Security and it will show up at login. Apple even puts a little example for you on this webpage 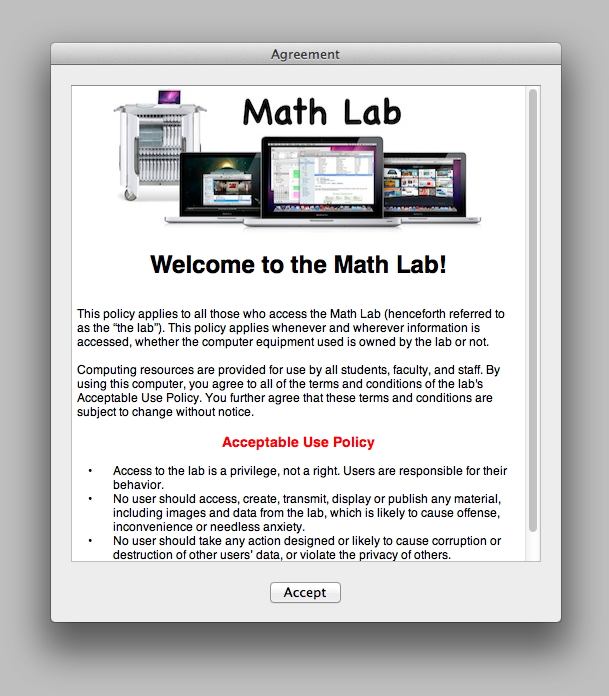 This is a very welcome development!

You can move between months in iCal with a 2 finger drag - it has the same page turning animation as iBooks on iPad.

Quick Look to Track Shipments from within Mail.app

I love the ability to track shipments straight from Mail.app without going to a browser...opens it right there in the thread for you with a neat little window (assuming the tracking number doesn't have a crazy format)... :-)

The lack of this frustrated standardisation with our corporate networks back in Leopard. Now I have the same user name over Mac, Windows and Unix.

Share
Improve this answer
answered Oct 21, 2011 at 5:59
community wiki
nOw2
Add a comment  |
5
Want to improve this post? Provide detailed answers to this question, including citations and an explanation of why your answer is correct. Answers without enough detail may be edited or deleted.

I found that iCal allows you to drag an event (so you can open another one). 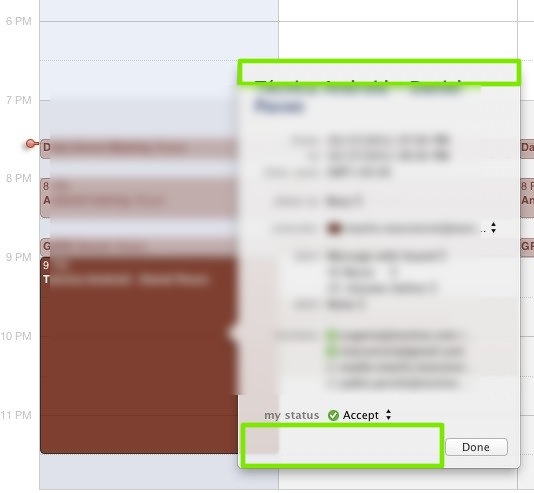 Then click on the areas in the green boxes of that popup and drag until it transforms into some sort of "palette".

The truth is that you can drag from any gray piece, but if the popup has a scroll area (because it's too large) then dragging from the scrollable area may not work. Try creating an event and adding a very large note to see the difference.

Once you drag it, it will look like this, so you can click another event and do the same, and you can have as many as you can pile :) 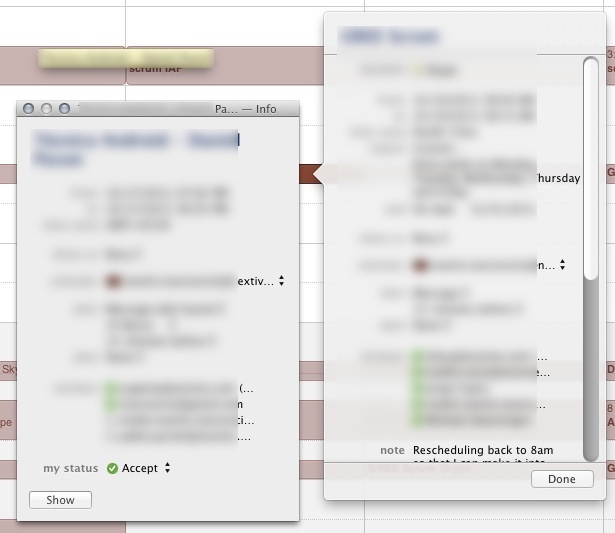 Sorry about the blurring on the images, but there were names there ;)

The Zoom ⊕ button will attempt to maximize

The Zoom button on the windows behaves more like Maximize on Windows OS rather than the old behavior where it usually made the window smaller (or the alternate saved/previous size). Be sure to experiment with the shift key when using the Lion controls.

I don't know whether this is lion exclusive feature or not:

In Snow Leopard, this key combination was recognised by Safari.

Before Lion, I often used the orderly and sizeable downloads window of Safari as a tool for organisation, so the disorderly popover in Lion was a shock to the system. I particularly hate the disorder. Also I often thought to myself … "One day, I'll accidentally click Clear … that button's far too near the scroll bar.".

When eventually that accident occurred I cursed, loudly. It was comparable to losing a list of to-dos.

I no longer hate the popover in Safari, but I haven't learnt to love Finder (it fails to find most folders that I seek), so I'm in limbo, somewhat disorganised. 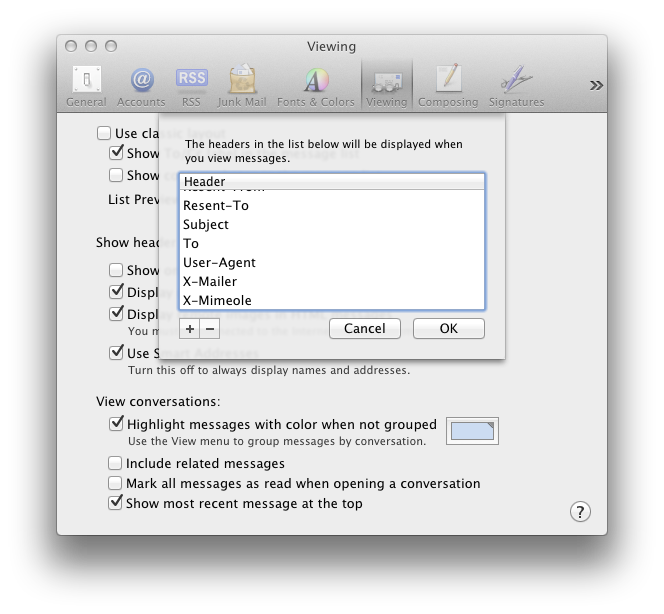 you can specify custom headers that will be presented to you above the mails:

Authentication dialogs shake when you enter your password incorrectly

The "shaking head" animation that has long been used in OS X's login screen to indicate an incorrect password has been added to the authentication dialogs present throughout the OS. I love this! It's so clever and you immediately "get" what it means.

Safari appears to aggressively manage its memory footprint by unloading unused pages then reloading them as needed, much like Safari in iOS.

You can see this in action if you open up a large number of tabs and then leave some of them alone and unviewed for a while. When you return to a tab that hasn't been viewed in a long time, Safari will quickly reload it.

41
Know of any features or tips and tricks in OS X 10.7 (Lion)?
17
Apart from being able to encypt an entire volume, what are the other differences of FileVault 2 over FileVault?
13
What scenarios benefit from Mac OS X allowing apps to run when no document windows remain?
9
Using "<Modifier>+Left/Right" to move between words in an editing window
14
keyboard no longer repeats keys when held down
6
How do you convert video within 10.7 without any 3rd party software
3
How do I change the default Space for an app in Mission Control?
5
Why my application icons wiggle when I press ALT key in Launchpad?
3
Lock Screen Screenshots
3
Will i benefit from important features of Lion with a trackpad/MacBook?
See more linked questions

11
What should I do when "An error has occurred" when downloading Lion?
117
What tiny thing in iOS 5 makes you smile, or has caught you off guard?
11
What has changed Finder list view in Lion to make "Calculate all sizes" exponentially faster?
88
What un(der)-documented features have you stumbled upon in Mountain Lion?