How to connect a USB-C-based MacBook to a Thunderbolt display?

Given the new 12" Retina MacBook doesn't have a Thunderbolt and only has a USB-C port, how do I connect it to an existing Thunderbolt display?

As @Kevin McKenzie already said, and just to expand on it.

At present there is no adapter for the USB-C to Thunderbolt.

Thunderbolt Gen 1 and 2 don’t support USB 3.1, Type C or even 3.0 for that matter. An adapter wouldn’t have fixed this problem. However, Apple is releasing Thunderbolt 3 later in 2015. It’s not ready yet, because it’s developed with Intel and now Gen 3’s functionality is tied to Skylake chips – which will replace Broadwell shortly. I know. You’re thinking “But Broadwell just came out!” That’s true, but only because of delays. Now, you may wonder how a new MacBook without a Thunderbolt port or a Skylake chip will support a Thunderbolt Display.

Well, in short it won’t. That is unless Apple releases a firmware update for their Thunderbolt cables. Which they won’t. So it probably won’t support it. Considering the last time they updated it, I think we’ll see an update at WWDC, with a USB C port on the display itself.

Right now, you don't. The Thunderbolt display requires a Thunderbolt connection as input, and while Apple did announce some USB-C dongles yesterday, none of them were USB-C to Thunderbolt. They may well come out with something in the future, or a third party may, or they may be releasing a replacement for the Thunderbolt display soon, one that also supports input via USB-C.

So if you are brave enough to give the monitor a hack, with some quick drilling action on the chassis and a Mini DisplayPort extension cable you can actually detach the display from the internal docking station and use it as a standalone display and use the docking station portion of the machine independently. Ugly hack and probably not worth it since Apple already had a Mini DisplayPort+USB Cinema Display in the past.

Using one of that and a third party USB Type C to USB+Mini DisplayPort+Power adapter you can use that last generation Cinema Display on your MacBook actually.

I have one of these. It works well, still providing access to the extra ports on the back of the Thunderbolt Display.

2 issues I have with the adapter: (1) it is quite long and slightly unpretty and (2) the Thunderbolt Display intermittently does wake from sleep, requiring that I unplug and replug the adapter.

If your display is Thunderbolt, it won't run even if you connect it properly to a mini-DisplayPort signal.

If you have a DisplayPort display, you can get things to work as follows:

You need three items to make this work.

This only lets the display itself work and you would need to connect USB to gain speakers and camera functions.

Apple will surely have a USB-C Display coming soon. The display would provide USB2.0, ethernet, firewire, thunderbolt, etc. The kicker is that the display could also charge the laptop through the USB-C cable. So you basically get a docking station in your display with a single connection to USB-C. Very slick, even if the Monitor is 2x the cost of what it should be. =(

Could this be a solution to connect the new MacBook to a Thunderbolt display?

Using the following adapters (and an Ethernet cable): 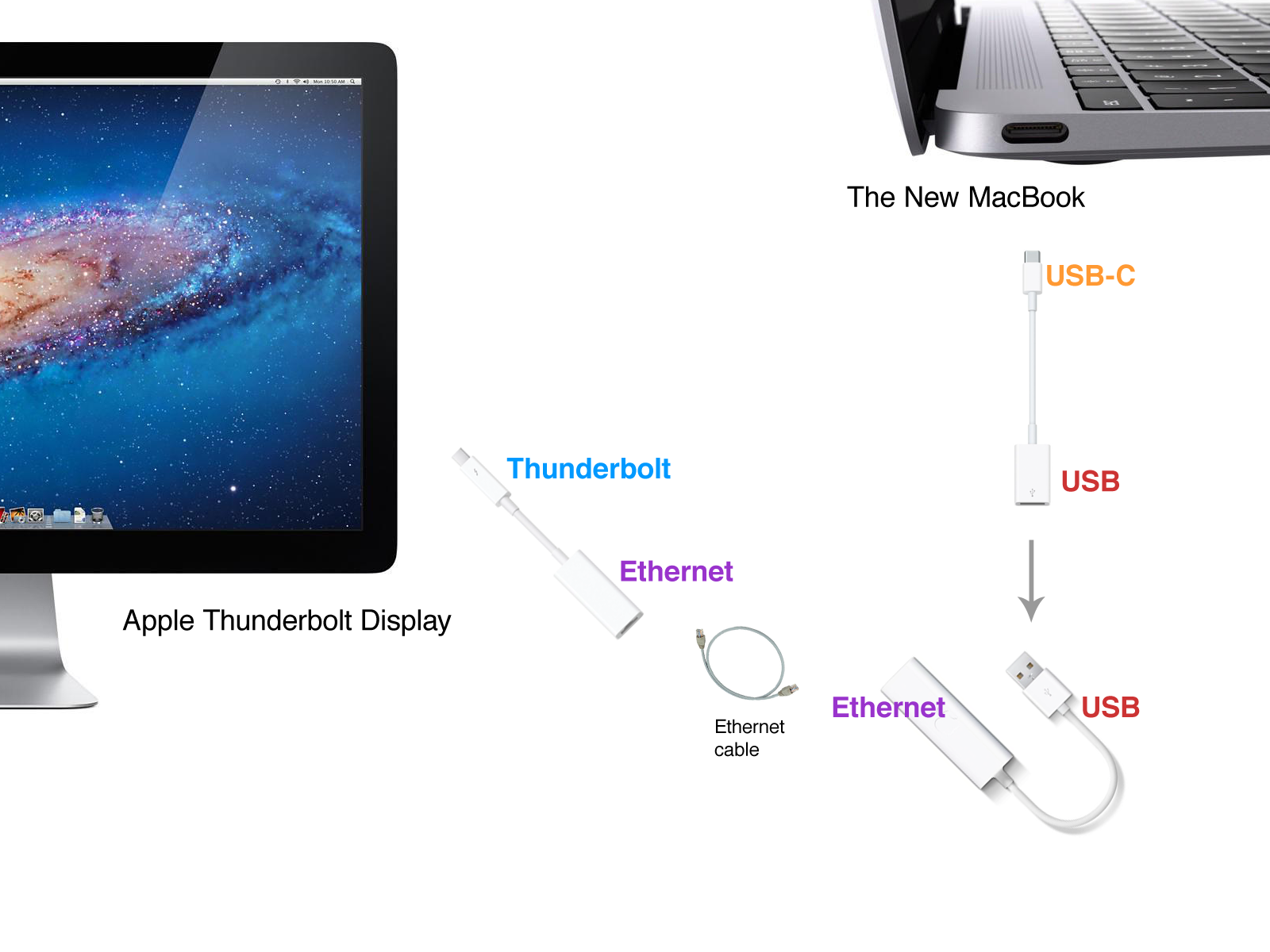 Not the answer you're looking for? Browse other questions tagged macbook-pro thunderbolt-display .

8
Will Thunderbolt Cinema displays work with Mini DisplayPort equipped macs?
3
Can I connect a Windows 10 machine with USB C to a Thunderbolt display?
0
How would I connect the thunderbolt 3 Macbook pro with a Thunderbolt 2 monitor?