I have a simple "Hello world" script that I want to turn into an executable. The problem is that even though I went through the steps of declaring the path of the Python interpreter in the first list of the code and made it executable via chmod, it does not run as an executable. Instead when I click it my text editor opens up the file. This sounds really stupid, but I've tried everything. ./hello.py prints Hello world in the Terminal.

I've tried changing the file to open with the Terminal instead, but it's greyed out.

What I typed in the terminal:

The problem is that double clicking the script opens text editor instead of running it as an executable.

Changing what the file uses to open itself by having it default to the Terminal, but OS X grays out that option.

Removing the file's extension should cause the file to open in your default terminal application. Alternately, you could select "All Applications" from the "Enable" menu in the "Open With" dialog to enable opening with "Terminal.app" regardless of the file's extension.

Change the file extension from .py to .command. 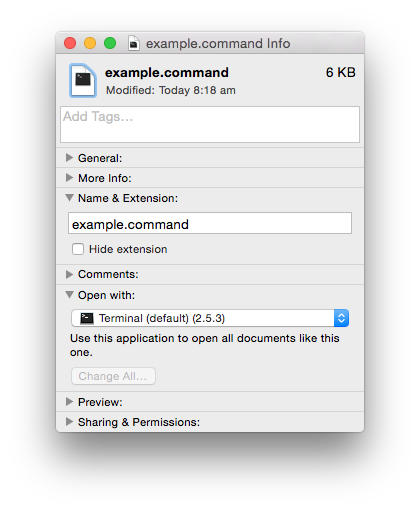 Not the answer you're looking for? Browse other questions tagged terminal macos command-line python .

1
Calling Python 3 script from AppleScript
1
Automator script runs without error but does nothing?
11
How do I write a script that opens an iTerm2 window and runs a command?
2
What causes AppleScript error 1721 when trying to execute Python3 file?
1
Shell script from Applescript
1
How to make Visual Studio Code run python 2.7.15
3
Can't run python script from Automator on Catalina “Operation not permitted”
2
Create macOS script to run a Terminal Command