Can't power on without SMC reset whilst holding power

Grabbed out my old unused White Macbook 13" Mid 2009 (Macbook 5,2) because I'd like to donate it to someone. However, it wouldn't power on or charge (no light on the MagSafe adapter).

Anyway, the Macbook still wouldn't turn on (and the MagSafe indicator remains green - never orange). So I worked out that if I SMC reset, the Macbook will then proceed to boot. However, when booted it said "No battery connected" and the fans remain on high power constantly (i.e. the kind of stuff an SMC reset is supposed to fix).

If I turn the computer off it then won't boot again. I have to repeat the procedure i.e. MagSafe handshake with another Mac, then SMC reset and it boots.

I pulled apart the Macbook detached the MagSafe connector and cleaned some gunk off it. I then replaced the hard-drive with a brand new SSD that has Yosemite installed (instead of Lion). I then gave everywhere else inside and out a clean and reassembled. However, after reassembling the same problem persisted (SMC reset needed before booting).

After several SMC resets and boots, I've now got the Macbook in another state. The power is connected but there is no light at all on the MagSafe. However, the computer boots up. When booted fans are on again, but no power indicator of any sort is in my status bar (no battery, no DC power thunderbolt either). Disconnecting the power instantly turns the Mac off, so clearly it's really running off DC power.

The Macbook is running the latest firmware/SMC. When booted up everything actually functions fine aside from the fan - I'm typing on the Mac now.

Does anyone have any suggestions as to what could be wrong, tests to diagnose or ideally a solution? I'm reasonably handy with a multimeter so if anyone has some power diagnosis steps then I can follow along easily enough.

The process I was using to get the machine to boot was a bit flakey, however I've now narrowed it down to 100% reproducible sequence.

Note: Having another Macbook around to plug the cable into is not important - all that seems to do is ensure the MagSafe light comes on, but it boots fine with the light off.

Now, when booted I have the fan and battery symptoms listed above.

I took the top off again and shorted the "SMC RST" (SMC Reset) pins on the board. This didn't resolve the problem, the behaviour remains the same. However, I've noticed a very faint ticking noise when I first connect the MagSafe cable to Macbook. It's very quite but there are exactly 8 ticks evenly spaced over about 2-3 seconds. This is pretty odd as the only moving part in the whole thing is the fans. Yet I hear this 100% reproducibly when I connect the power cable.

I'm presently waiting for a new battery I've ordered to arrive. Hopefully the new battery will shed light on the issue, or ideally resolve it!

Brand new battery has arrived. When I insert the battery and try boot, the machine will not boot. My usual boot process (outlined above) does not work with the battery present, I can not power on at all. The Magsafe connector's light remains off.

Historically, Macs have been known to have various issues - including not starting up - when the PRAM battery has died. Later MacBooks (including yours AFAIK) use the main battery for PRAM and SMC memory retention rather than having a separate battery for this purpose. Replacing the battery should clear startup and charging issues. 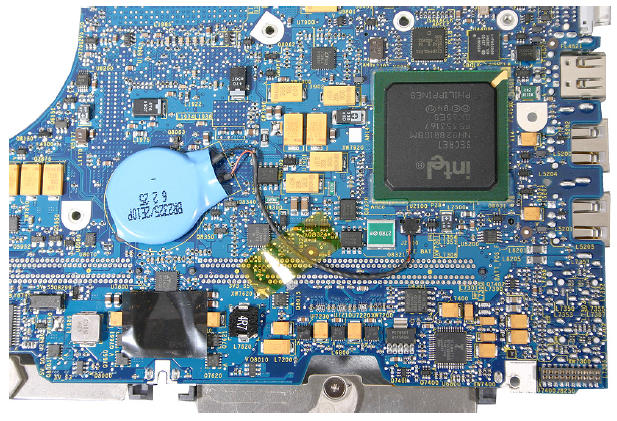 The round blue thing is the Backup Battery. Next picture shows the battery being pried up. 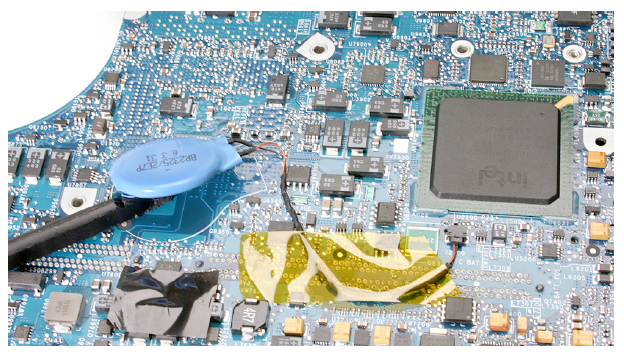 These pictures were taken from page 136 of the following Apple Service Manual:

You can get a copy of this manual as a pdf by downloading this linked file: MacBook Late 2006/Mid 2007. The Apple Service Manual for your Mac is:

You can get a copy of this manual as a pdf by downloading this linked file: MacBook Early and Mid 2009. At the top of page 10, is the following:

So there is a capacitor to provide power in the event the main battery has been disconnect for short periods of time.

By the way, you might find the latter service manual useful. It is a shame most of the links are broken. I tried looking at the manual, but without the computer in front of me, it is hard to run some of the tests.

Not the answer you're looking for? Browse other questions tagged macbook-pro power-management magsafe .