ssh -X does not work on Yosemite

Can no longer use X11 with ssh. Have XQuartz2.7.7 installed. Logging in with X11 via ssh gives the warnings

In my own system, echo $DISPLAY gives

However, when I try xauth generate $DISPLAY . trusted, I get the error

Any ideas in how to fix this?

You can see http://xquartz.macosforge.org/trac/wiki/X112.7.8 for a full set of changes, but most noteworth ones are:

1) xauth now correctly parses the Yosemite launchd $DISPLAY socket path
2) libGL has been updated to Mesa 10.4.4
3) Various exploits were fixed in xorg-server, freetype, and libpng
4) A bug preventing automatic updates in some cases has been fixed

The bug report is closed and marked as fixed: 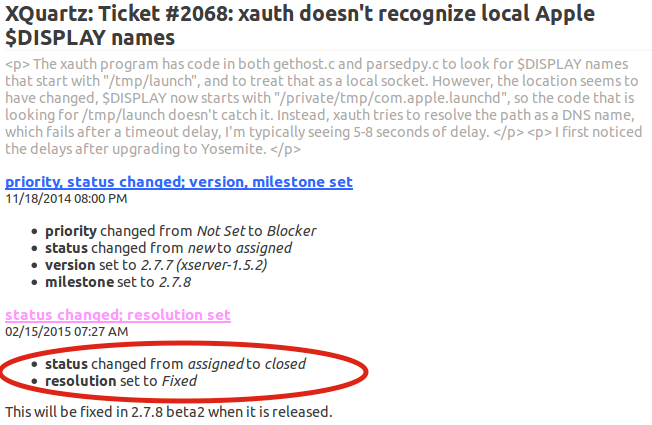 If you can't (or don't want to) install the beta, you can still use the workaround I explain below.

(scroll down for the workaround section)

My first thought was "the DISPLAY variable is wrong". But it's not.

As it turns out, on OS X 10.10 Yosemite (and back to 10.8 Mountain Lion) the DISPLAY variable stores a launchd socket path:

instead of the familiar display name:

(I've added some information about the hostname:displaynumber.screennumber format at the end of this answer.)

This means that xauth has to know how to deal with this special incarnation of the DISPLAY variable, and as of Mavericks, it did, but the socket used in Yosemite has a different path (more precisely: /private/tmp/com.apple.launchd.XXXX instead of /private/tmp/launch-XXXX), and xauth breaks.

The xauth program has code in both gethost.c and parsedpy.c to look for $DISPLAY names that start with "/tmp/launch", and to treat that as a local socket. However, the location seems to have changed, $DISPLAY now starts with "/private/tmp/com.apple.launchd", so the code that is looking for /tmp/launch doesn't catch it. (...)

According to the bug description it is to be solved in XQuartz 2.7.8, which is 4 months late (see the project roadmap page at http://xquartz.macosforge.org/trac/roadmap).

So it's only a question of time until this patch finds its way into the next release of XQuartz.

to ~/.bashrc and either start a new Terminal window or source it (. ~/.bashrc) in your current Terminal session. 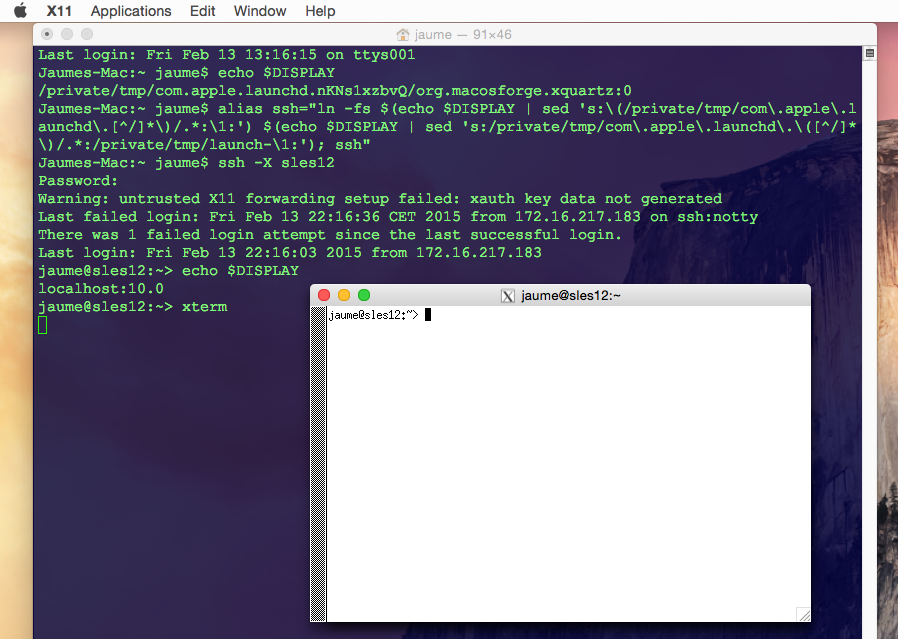 Not the answer you're looking for? Browse other questions tagged macos ssh x11 xquartz .