Text messages are disappearing when sent between two iPhones.

The issue of iMessage losing messages sent to users who have switched to non-apple devices is well documented, but in this case we're seeing one iPhone user message another, and the message never gets through. There's no indication on the sender's side that the message failed- we just happened to notice it on our own. It's happened at least twice within the past few months (though probably a lot more)

Here's the latest example. My friend asks a question, and I respond a couple of minutes later, but she never gets it on her end- though everything looks fine on my side: 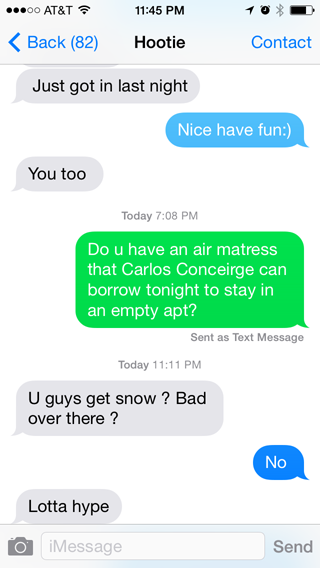 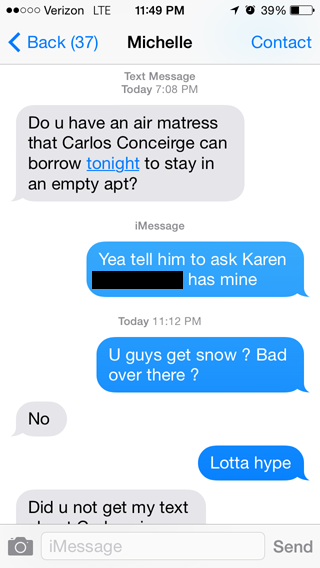 One possible clue: Her question was sent as an SMS, not an iMessage (which apparently happens when a phone can't access normal data coverage - hence the green bubble.) Did that somehow cause my subsequent reply to get lost?

Whatever the case, there's no technical excuse for a queued messaging system to be silently vanishing messages- Apple's got some explaining to do.

My friend just received the missing message on Feb 7, eleven days after it was sent...

20
How to disable iMessage on a broken iPhone?
0
Why are my iMessages being sent through my Apple ID?
0
If iMessage is off, and someone sends a message as iMessage, will she be able to receive it once she turn iMessage on?
8
Apple Watch won't send iMessages
2
iPhone sends iMessage, but doesn't show that it was “delivered”, even though it is
1
iPhone no longer sending messages as SMS when recipient is disconnected from data
3
iOS 10, Messages has bifurcated chat history with my wife
3
iMessage “delivered”
6
When does Messages message via iMessage vs. SMS?