Two identical USB microphones at once -- is it possible?

I just got a pair of Blue Yeti USB microphones. Unfortunately, my Mac only wants to recognize whichever one was plugged in last. To be more specific, they both appear under USB in System Information, but only one in System Preferences and Audio MIDI Setup.

Is it possible to use both at once?

It used to be that two USB audio interfaces/mics would require you to create an aggregate device in order to use them both at the same time with OS X. As this was still the case in early 2014 (see the Macworld article, below), it probably is still the case today.

However, there are differing reports when it comes to identical USB devices.

Back in 2011, an audacity user was testing this specifically and reported:

So, far from being the outlier, Aggregate Device is required any time you plug in two identical USB sound devices.

But in 2013, Blue Microphones themselves are reported to have said:

Because of the nature of USB devices, you won’t be able to use two of the same USB microphones at once. Since they have similar digital thumb prints your computer won’t be able to distinguish the devices as separate devices. With that being said, you can use two different USB devices/microphones at once with no problem. As far as being able to use it within a specific program you would have to find out if it allows multiple USB connections [...]

So, without further information, your best bet would be to try to create an aggregate device from both mics, and then test with an application which can record multiple channels (which I assume you already have since you want to do this in the first place).

Plug both USB microphones into your Mac, venture to the Utilities folder (/Applications/Utilities) and launch Audio MIDI Setup. In the bottom left corner of the resulting window click the plus (+) button and choose Create Aggregate Device from the menu that appears.

To the right you'll see a list of all the audio devices attached to your Mac, including those two mics. Tick the Use checkboxes for the two microphones (if any of them have multiple entries, look for the one that has a 1 in the In column). As you do so, subdevices entries will appear above the list of audio devices. This tells you which mic is using input channel 1 and which is using input channel 2. If you like, click on the name Aggregate Device in the column to the left and change it to something more intuitive such as “Two Mic Setup.”

If you are able to do that, then the resulting device should be both mics, one on each channel, so they can be recorded separately (or, potentially, recorded as stereo and separated later).

Of course, if only one of the mics appears in Audio MIDI Setup then it's possible you won't be offered the option of selecting them both when creating an aggregate device.

Sadly, this post suggests it will not be possible but, if you contact Blue, they should be able to 'reprogram' one of your mics so you can get this working as an aggregate device:

Bue Yetis have identical digitial footprints and therefore no matter how many you plug in, they will be recognized as a single device. I contacted Blue and ultimately I was able to send one of my Yetis to them for reprogramming and now my Mac will recognize it along with another Yeti in order to create an aggregate device.

Fair warning, this process took over 2 weeks and I had to pay out of pocket shipping, they paid FedEx ground (signature required) back to me.

FWIW, I had this exact problem trying to record with two identical Samson Q1U mics using Garageband. I created an aggregate device and it looked okay in the app. But then only one mic was actually recorded. Very frustrating.

The good news is that it works perfectly without any aggregate device mumbo jumbo in Rogue Amoeba's Audio Hijack. The Samson shows up twice in the input menu. The first is one mic and the second is the other. Phew!

I am currently using two identical Blue Yetis on my MacBook Pro under the aggregate device I set up a couple months ago. (see photo) I think the trick might be creating the aggregate first but I have to say: I was panicking because I had a sit-down interview scheduled the next day and I was flailing about in my attempt at getting this set up so... of course, I can't remember my exact steps. Perhaps a stronger user might be able to make sense of this? 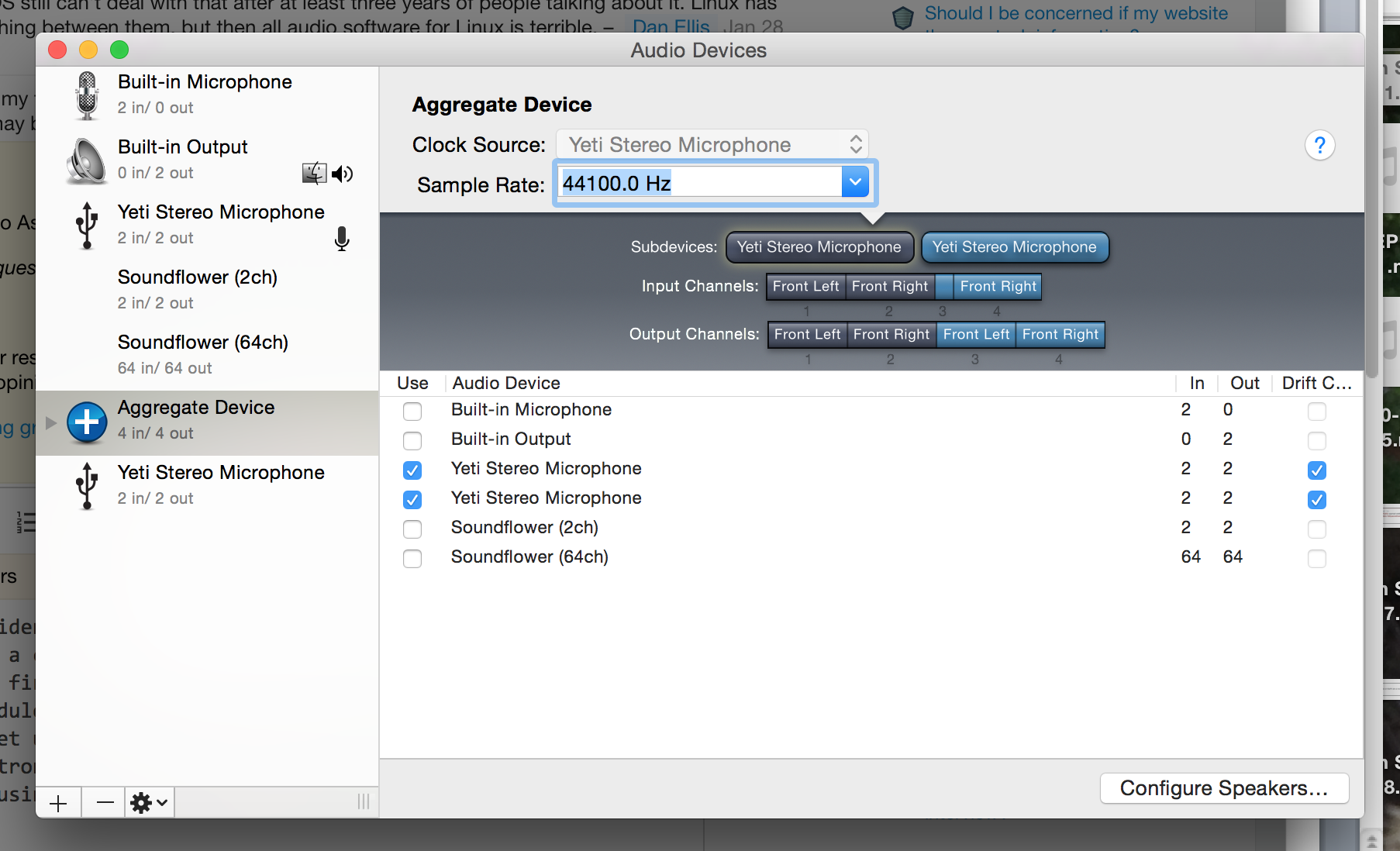 I know it doesn't answer all the questions but it does work! Maybe just do what I did: watch 15 outdated YouTube videos, panic, scramble, stay up too late, have some adult beverages

We thought we had connected two Yetis with an Aggregate Device using the setup Salamander reports, but discovered that the first mic in the list was actually picking up and broadcasting to both tracks.

Update: As of Feb 21, 2019, you can now download the firmware update directly to your device through their free software called Sherpa.

Edit: Don't forget to set your number of channels to 4! https://forum.audacityteam.org/viewtopic.php?t=90202

Not the answer you're looking for? Browse other questions tagged audio usb microphone .

5
How can I use 2 USB Headsets on one Macbook?

1
How can i aggregate two pairs of headphones/microphones into one audio stream using Audio MIDI Setup?
0
Use a USB sound card with multiple input lines in apps like Skype or Dictation?
0
Route USB mic input to System Audio output for Camtasia 2?
0
No audio going into GarageBand
2
combine two audio inputs (microphones) for Zoom