My iMac has been hacked via sshd. What now?

I accidentally had "Remote Login" enabled in my Mac's system preferences, so the sshd was running.

I just notified in Little Snitch's network monitor window, that it logged about 90 connections from different servers to sshd. I checked the ip addresses on http://ipinfo.io and all the logged ip addresses are located in China, Hong Kong and South Korea.

It seems to be pretty bad.

I looked around a little bit in the available network protocol of Little Snitch and found out, that the ip addresses appearing in the sshd log also appeared in the logs of several other processes, including

all with user "root" (including the sshd logs). I thought user root was disabled by default on Mac OS X, but this might all be results of the hack...

So the question now is how to proceed?

I use a cable modem for internet connection (FritzBox 6360). UPnP is switched on (and I use this feature for several apps). There where several mappings to port 22. I removed all these.

But probably this won't be enough.

Since my computer definitely is compromised I don't really trust it anymore. What should I do now? Erase the whole thing and re-install all new? That would be a huge amount of time going down the drain.

And what's about the DDService64d access? Is my Drobo 5N also compromised? Is there a way to check this?

If you are absolutely certain that your Mac has been hacked I'd strongly recommend that you erase your hard drive, reinstall OS X and manually copy you data back from Time Machine:

iCloud synchronization is especially important for Keychain, and I talk from experience: I had a pretty hard time exporting and importing Keychain after installing OS X Yosemite from scratch without restoring from a Time Machine backup.

A piece of advice: It is best practice that the login account you use on a daily basis doesn't have administrative rights. You should create an administrative account instead. I usually call it admin: 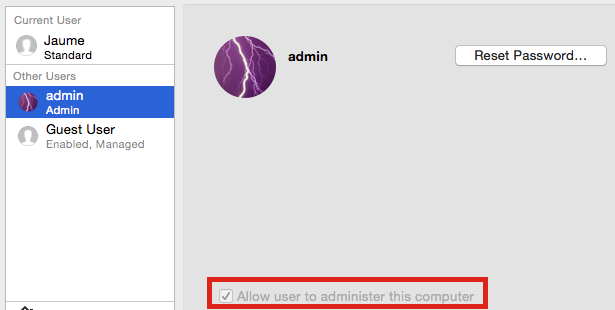 while my account is 'Standard'. The side effect is that OS X will prompt you to type admin's password every now and then, for example to edit settings in System Preferences: 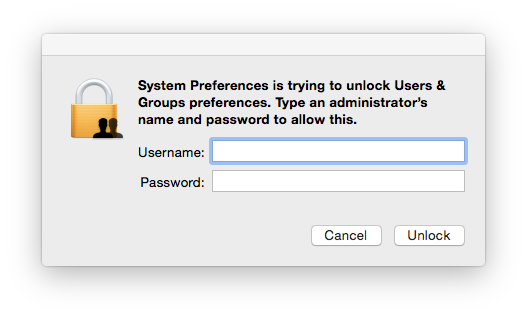 Identify as best as you can the date of 1st attack. Because all the backup after this date are corrupted and can't be trusted. (By the way, no need to make a backup of a potentially dangerous system.)

Look at the oldest log in /var/log/system.log showing abnormal ssh access, i.e. from an IP you weren't at.

Once you have identified this approximate date, estimate the perimeter of damage caused by your attaquant.

If the event occured 14 days ago, use a find command to identify all the files your attackants modified on your system:

I insist on using /usr/bin/sudo because it is possible that your sudo within your PATH might have been replaced.

A safer method is to do all this investigation with:

From a safe version of your Yosemite on an USB or an external drive do:

Restore the rest of your users data from a backup older than the date of 1st attack, in my example 15 days old.

Change them on any other system were you might have used the same passwords. Consider all of them as dangerous… since 14 days.

Now you can configure your Mac to a normal network configuration and return to the surface of the Internet :).

Not the answer you're looking for? Browse other questions tagged macos security ssh .

15
How to launch a GUI application in another user's graphical session?
2
Has my computer been hacked
2
How to debug child's El Capitan login hanging?
8
Why do I have two Guest Users?
8
Has my MacBook been hacked?
1
Has my iphone 5 been hacked?
0
sshfs under autofs from Debian 10.9 to macOS 11.0 fails, but sshfs without autofs from and to same works fine