Huge inconsistency in disk space measurement, missing 50% of the disk

I own a MacBook Pro 13 Retina, OSX reports disk usage as 450Gb, but utilities such as DiskInventoryX tells a different story reporting 226Gb as used disk space:

How can I convince OSX to give me back my disk space? Given that DiskInventoryX (and other I tested) cannot find where these 411Gb marked as "Other" are what can I do to identify the issue?

You may be seeing the difference between used bytes versus used blocks on the disk.

If a tool iterates over the files on your disk and totals the file sizes in bytes, the total value will not match the used disk space.

Try using other disk tools to determine the remaining disk space. The df tool should provide some insight df -h.

Consider using a tool like GrandPerspective to view the contents of your drive; it appears better maintained than Disk Inventory X. Be aware that these tools show file size and not blocks used. 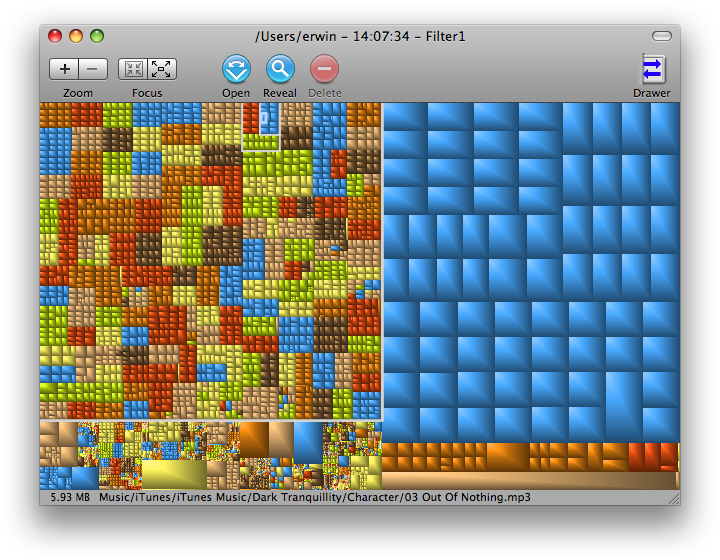 A whole disk scan of the system by GrandPerspective reported that the scanned files (all of "/" ) were only about 35 GB in size, and that "Miscellaneous used space" was a few hundred GB, which should have been deleted/freed when I killed off the unwanted user account.

I ran Disk Utililty.app to "Erase Free Space" and it churned away creating temporary files to write to the "unused space". While that was running, GrandPerspective reported smaller "Miscellaneous used space" and the Finder reported around 700 GB of free space (up from just a few hundred). Then it jumped to larger "misc used" and smaller "free". Then it reported "running out of room on boot drive!" then it failed with a "cannot create temp file" error, but after I quit Disk Utility.app the finder reported 963GB free space, as did Disk Utility.app as did GrandPerspectives.

So the long and sort of it is that running "Erase Free Space" via Disk Utility.app freed up that free space.