Are Apple's AC Cords for MagSafe (1+2) always the same?

I am getting a customised MacBook Pro Retina and it will have a AC Cord for Britain, but I need one for EU/Germany.

So can I easily switch the AC Cord of my MagSafe 2 to a German one? Are these Cords somehow patented or normed, so I can use every cord on any adapter? 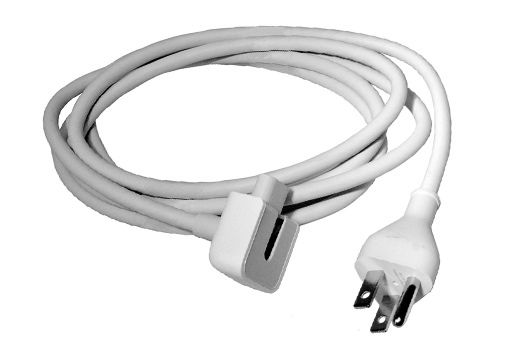 Also: Where am I able to buy a Apple-original AC Cord (not the whole adapter)?

Absolutely no problem to change the cable! Any Apple adaptor cable with a similar connector since the last decade will do fine. Even the plugs from your iPad charger will work.

In fact, you also can use a standard radio cable (sometimes called an 8-shaped power cable). You can find them anywhere, in shops for $2 but probably also attached to various household appliances. Works fine.

As you can see, your Apple adaptor cable doesn't have a real 8-shape, but rather a B-shape. This makes the cable useless to attach to your radio, but the radio one can be attached to the Apple adaptor. There is no obvious reason for Apple to do that.

We regularly buy/replace Macbooks while traveling. Therefore we end up with exotic power plugs without too much use. Rather than using a travel adaptor or replacing the whole cord, we just cut off the plug-side and solder or screw on a EU plug bought at the local radio shack.

Cutting the cable and placing 3rd party plug will obviously void the warranty on that very cable, and might be illegal according to your local law. In Germany this is allowed, as long as your new plug is DVE-certificated. In any way, it's 220v and placement should be done with care.

I have never seen the entire cord for sale, though I suspect they might sell them as replacement parts. You should check with your Apple store or call them.

I assume you know about the travel kit, which replaces the shorter, plug only option for the Mac power adapter (without the cord):

Not the answer you're looking for? Browse other questions tagged macbook-pro power magsafe .

5
My MagSafe to MagSafe 2 converter becomes extremely hot. Why?
4
Using 45W Power Adapter with MacBook Pro Retina 15
1
Which chargers to buy for a charging station?
1
After using fake charger with my Macbook Pro Retina 13, an original new one won't light up
2
Can a 2015 Macbook Air MagSafe 2 connector be filed down to work with a 2009 Macbook Pro?
0
MacBook Pro Power Supply Options
1
How to cope with MagSafe "withdrawal"?
1
Is there a medium power adapter for MacBook chargers?