How to keep an SSD in shape on Yosemite?

As of OS X 10.10, Apple uses kext signing. Ever since it has become difficult and dangerous to manually activate TRIM for third-party SSDs on OS X. That means users with non-Apple SSDs will sooner or later see degrading write speeds.

So I am wondering what are my options to avoid this situation. Some approaches I could think of imply additional problems:

To summarize: No TRIM on Yosemite. What can I do?

Yes! Since the release of 10.10.4, Apple now provides a new tool called trimforce, allowing users to activate TRIM also on unsupported disks. So now the ultimate and final answer is:

Finally I found a way! Apparently there is a neat trick hidden in the fsck tool as this answer says.

So in the future I will boot into Single User Mode (press ⌘+S at boot screen) from time to time and issue the command fsck -fy. It will check the disk and finish with the message Trimming unused blocks.

So there is a new tool called Disk Sensei that specializes on exactly that problem. It has a manual TRIM command and helps you turning Yosemite's kext signing on and off.

Furthermore, I read about DiskFresh which would somewhat accomplish what I was originally asking for. This Windows (Bootcamp partition required) tool will rewrite all data of partitions or an entire disk. This approach seems a little less painful than wiping my SSD and restoring it from a backup. However, it also comes with the downside of doing an additional write cycle.

Alternative approach would be to leave as much space on SSD free as possible for GC to work well.

I did this i.e. enabled TRIM on clients computer just when Yosemite was released and I didn't fully understand consequences of it. Now I only hope she will install update with new AppleAHCIBlockStorage before she will try cmd+optn+p+r for some reason.

Now I wouldn't do it on anything except your computer that you can deal with being down for some time if you clear NVRAM. You had to have another Mac or boot media/install media around and printout of sudo nvram boot-args=kext-dev-mode=1 though.

Depending on the SSD manufacturer, I've read that restarting your machine and holding down the option key, which will bring you to the start-up disk chooser and then letting it sit in that state for a few hours without choosing a boot disk will allow garbage collection to commence, I believe I read that on the MacObserver's MacGeekGab or maybe it was the podcast, not sure. Have you heard this to be true? @PascalCouq

You might want to try the software "disktester." It has a recondition function that apparently works with SSDs. I haven't yet tried it myself, but it looks pretty legit. 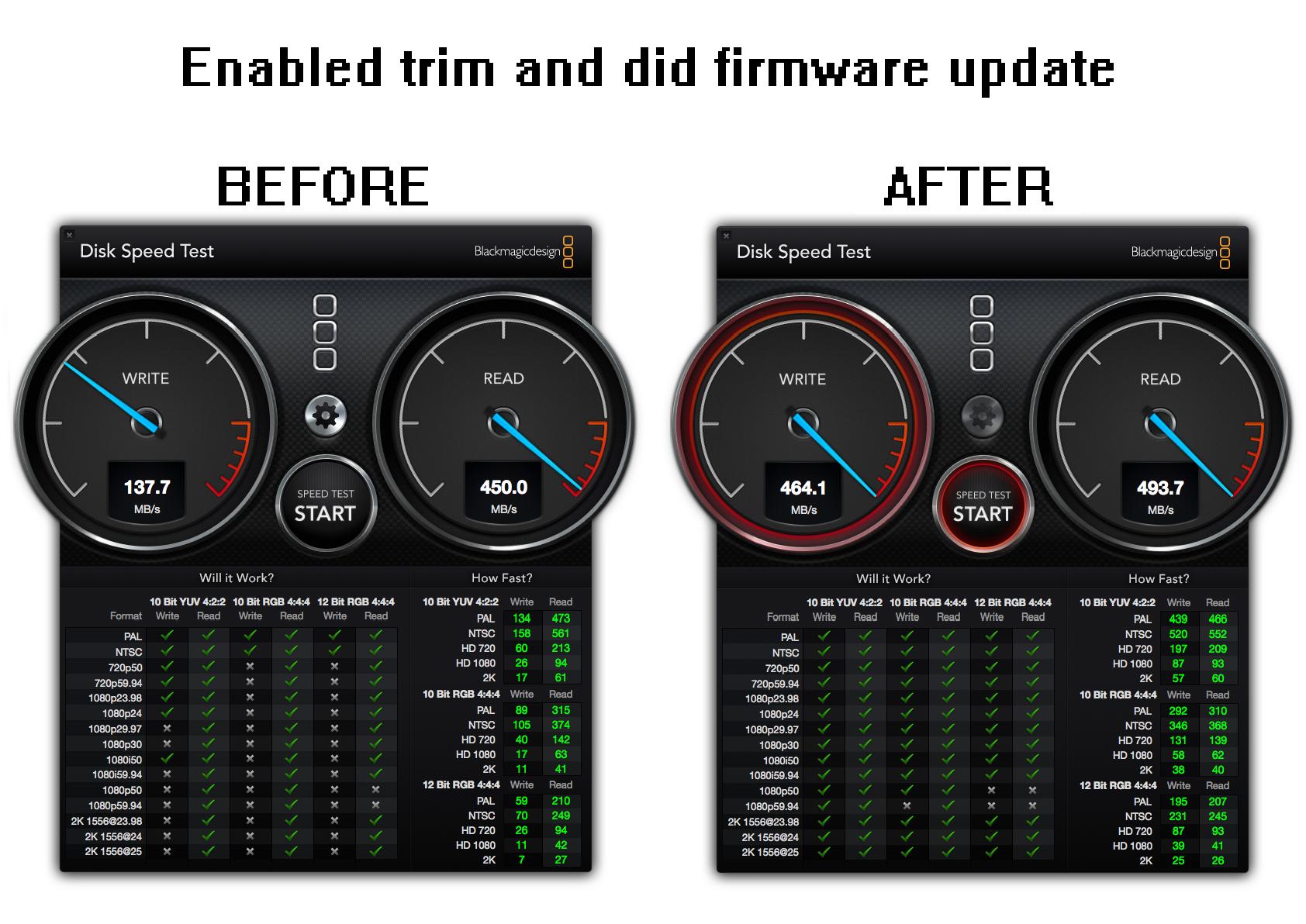 Not the answer you're looking for? Browse other questions tagged macbook-pro macos ssd performance trim .

4
How to natively enable TRIM in Sierra for a 3rd-party SSD?
8
3rd-party SSDs: enabling TRIM without disabling kext signing
7
Yosemite won't boot any more after attempting to enable FileVault and TRIM
4
After enabling TRIM should I delete free space?
4
What are the Best Ways to Speed Up a Mac?
2
How can I ensure TRIM is enabled when installing Yosemite onto an SSD drive?
3
JetDrive 725 - SHould I use TRIM enabler?
2
How do I fix my SSD after installing Yosemite and Enabling TRIM? No boot & can't erase
3
How often and for how long does Trim Enabler need to run?
2
Consequences of disabling kext signing
See more linked questions

9
Does FileVault 2 interfere with TRIM when using an SSD?
5
Should I enable TRIM with a third party (non-Apple) SSD?
2
How can I ensure TRIM is enabled when installing Yosemite onto an SSD drive?
8
3rd-party SSDs: enabling TRIM without disabling kext signing
0
Third party SSD optimization Yosemite
0
Yosemite and SSD Trim incompatibility