Why does Finder see volumes which are not under /Volumes?

If I navigate as high as possible in Finder (under 10.10.2, but this did not appear only recently), I see this window, with many volumes which are long unmounted, ejected and erased. 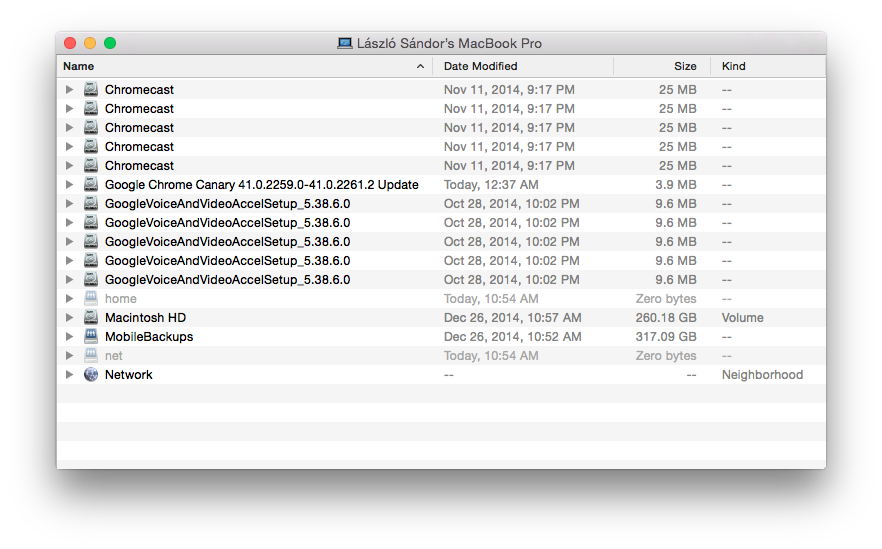 But if I tried to look around in the Terminal to potentially delete these, it only found the reasonable ones:

What is going on, and what is there to do?

Finder will show all mounted volumes, regardless of where it's mounted from.

Open up Terminal (from Applications -> Utilities) and type 'mount' then hit enter. You'll get output similar to this:

This shows what's mounted, and where. I have a disk mounted under /Users and Finder still shows it at the top level.

This should tell you where those volumes are coming from.

Also, try clicking on one and either cmd-I, or File -> Get Info, to see what Finder thinks it is.

Unix wants to present all of your files in a single hierarchical tree, no matter what device they're on. This makes it possible to name any file on any disk using a single descriptive string, called its path.

In order to do this, when a new disk volume is mounted, whoever mounts it names an existing folder to be the "mount point" for the volume. Whatever was in that folder becomes inaccessible, replaced by whatever is at the top level of the newly mounted disk image. When the disk is later unmounted, the folder and its contents become accessible once again.

Unix permits any folder to be "sacrificed" in this way. OS X is based on Unix, but does not normally avail itself of this flexibility. It prefers to "sacrifice" a newly created empty folder as the mount point. /Volumes is the place where OS X conventionally creates this folder. When the volume is unmounted, OS X also removes the newly exposed and still empty folder.

But that's only an OS X convention. OS X is still Unix under the hood, and Unix apps can still mount volumes on whatever folder they want.

Finder synthesizes its top-level list from many sources. Obviously the list includes anything that really is at the top level of your boot volume and is not invisible. You know it also throws into the mix any volumes with mount points inside /Volumes. But it doesn't stop there. For example, hdiutil info lists all volumes mounted from disk images or from RAM disks, no matter whether their mount point is in /Volumes or not. More generally, OS X also inherits from MacOS a method to find info about every mounted volume however it got mounted.

Most of your unexplained items seem to be Google-related. Who knows why, where, or how Google does anything?

Not the answer you're looking for? Browse other questions tagged finder macos disk-utility disk-volume .

0
Why does my finder window not allow for re-sizing?
2
Why does Finder search not find my .c files?
0
OS X 10.10.5 - root user suddenly activated
0
Finder does not update
3
Cannot see macOS volumes in Boot Camp
1
Why are my files all now within Volumes?