Unicode font changes depending on input in text box

The letter ℂ, which is unicode U+2102 behaves strangely in Keynote. If presented by itself in a text box, one font is displayed. However, if it is prepended with the letter 𝔻, which is unicode U+1D53B, a different font is used. I'd like the fonts for all double struck characters to be the same, but I'm finding it impossible to get ℂ by itself in the same font as 𝔻. How can this be done?

The screenshot below shows this phenomenon in Keynote. The font has not been changed to get from the first rendering of ℂ to its rendering in 𝔻ℂ. Deleting the 𝔻 makes the font of ℂ revert back to the first one. 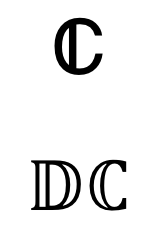 2
Use option-arrows with Unicode Hex Input
0
Adding Unicode decorators to text in Pages
7
How does the OS X font fallback system work?
2
Does anyone know how to disable unicode text input in text fields?
3
How to change fonts picked by Terminal.app to display languages other than English?
5
Keynote control text box size
0
Scrolling text box in Keynote.app?
6
OS X: Unicode Input
5
macOS Sierra doesn't have the crispy fonts as they used to be in earlier versions